Well you all seemed to love January's hottie of the month and luckily February has had some strong contenders. Thought it might go to Oliver Chris in Closer - love Oliver Chris - but then I went to see Gods and Monsters at Southwark Playhouse last weekend. No contest, February's theatre hottie is Will Austin.

When he first appears on stage he's wearing jeans and a white vest and I swear the audience collectively held their breath. Having seen him in the flesh, he looks like he's been spending even more time down the gym since these pictures were taken. Gods and Monsters is his stage debut and if you won't get a chance to see it, he'll be playing (another) marine in Mission Impossible 5. Not er..convinced? Well there are some more pics here.

Review: Gods and Monsters (and men in the buff), Southwark Playhouse 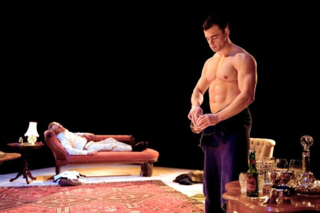 Ian Gelder and Will Austin in Gods and Monsters, Southwark Playhouse. Production photo by Annabel Vere

It was noticeable that the audience for Gods and Monsters at Southwark Playhouse yesterday afternoon was predominantly male. In fact, I could count on both my hands the number of women present, which made for a blissfully non-existent queue for the ladies at the interval.

Gods and Monsters is about James Whale, the London theatre turned Hollywood film director who was most well known for directing Frankenstein and Bride of Frankenstein in the 1930s. He was, unusually for the time, openly gay. The play also carries warnings of nudity. I like to think it isn't the latter that is drawing in the crowds but this production has garnered a certain reputation since it opened (see photo).

The play sees Whale (Ian Gelder) in his later years, in his California home, recovering from the effects of a stroke. He is in pain and his memory and word recall can come and go but his medication make him sluggish so he tries not to take it. He is encouraged to paint again, something he did when he was younger but, with mischievous charm, uses it as an excuse to get young men to disrobe.

With flash backs to his youth and early relationships at University and then as an officer in the First World War, we get a picture of man who was rose from a humble background on the back of his artistic talent and cleverness. A man who loved men.

Continue reading "Review: Gods and Monsters (and men in the buff), Southwark Playhouse" » 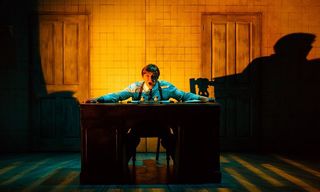 The nights are drawing in and the Grand Guignol in early 20th Century Paris is drawing in the crowds for its macabre and terrifying horror shows. Meanwhile outside on the streets of Monmatre a monster carries out his gruesome murders.

Into this scenario steps eminent psychologist Dr Alfred Binet (Matthew Pearson) who is conducting a study of 'creatives': "Actors, playwrights, lunatics. They are all imminently fascinating to me."

And so it begins, a witches cauldron of horror, melodrama, satire and farce with a pinch of murder mystery added for good measure.

The actors at the Grand Guignol are pretentious and affected, the stage manager/props maker bossy and the owner of the theatre demanding in the pursuit of profit. The theatre's resident writer Andre De Lorde (Jonathan Broadbent) is a gentle soul but a slave to his craft and haunted by Edgar Allen Poe whom he relies on for inspiration (a terrifying Andy Williams complete with stuffed raven on his shoulder).

Later we meet the theatre critic Level (Andy Williams again). He is all that you imagine in this context but with a delightful twist. 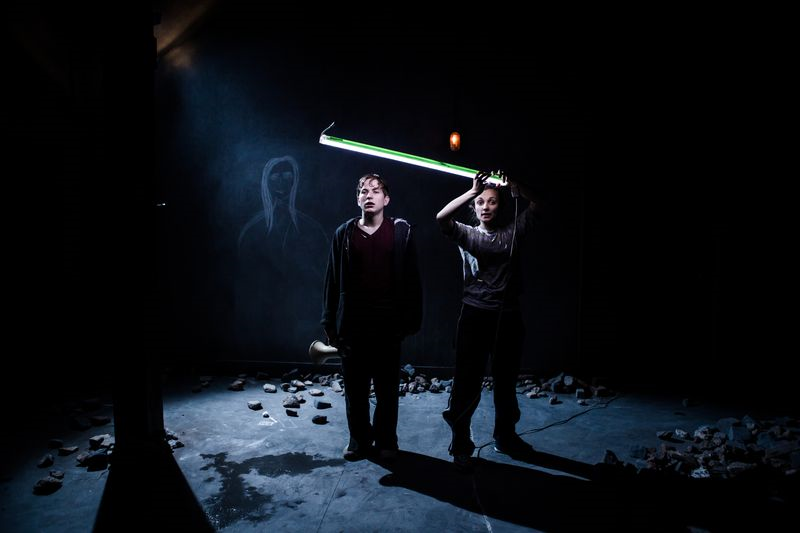 This production of Chekhov's Three Sisters is a version by Anya Reiss who has modernised the language and placed the sisters in a British enclave, in an unnamed Middle Eastern country, from where the British army is about to withdraw. The characters have mobile phones and iPads and rather than wanting to return to Moscow the sisters want to return to London.

The problem with going down this path is one of context. The basic premise of Chekhov's play is that the three woman are trapped in a man's world, unable to fulfil their desires and return home because they can't do so without their brother Andrei. Those constraints just don't exist in this modern context and the production just reminded me of that fact all the way through.

In the same way that my inner voice is screaming "just sell the friggin' cherry orchard" in this I just wanted to yell: "get onto Expedia and book yourself a flight". And in the same context would Masha stay with her husband whom she resents?

Stuck in a place they don't want to be the three sisters and their army friends philosophise on their place in society, their worth and happiness. However, all this got clouded by the modernity of the setting and considering its trimmed running time - 2 hours 10 including interval - it felt a little slow and stodgy. 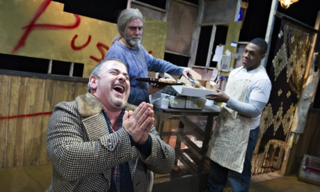 The two Tracy Letts-penned films I've seen were distinctive for their bitter sharpness exposing darker, uglier aspects of human nature often viscerally. His new play, Superior Donuts at the Southwark Playhouse is far gentler by comparison; while not shying away from the darker aspects of life it is generally more subtly done.

Arthur (Mitchell Mullen) is the son of Polish immigrants and runs the family doughnut shop in a poor suburb of Chicago. Well I say run it, he seems to be running it into the ground as the Starbucks gentrification of the neighbourhood creeps ever closer. He gives away doughnuts to his regulars: a homeless woman, two local cops and a Russian immigrant - the latter wants to buy Arthur's store.

Arthur's previous assistant has quit, essentially over an argument about politics and is suspected of being behind the vandalism the store has suffered. When 21-year old Franco (Jonathan Livingston) turns up to take over the job he is full of ambition and plans for the shop but Arthur isn't immediately convinced.

At its heart this is an unlikely friendship story. Arthur is depressed and haunted by the past. He dodged the draft during the Vietnam war fleeing to Canada, his ex-wife has just died and he hasn't seen his daughter for years. Franco is the antithesis, full of life and ideas. He's just finished writing his first novel which he started when he was 14 but he too has a past which is starting to catch up with him.

Review: Jekyll and Hyde at the Southwark Playhouse

Flipping The Bird's re-imagining of the famous Jekyll and Hyde story garnered five star reviews at the Edinburgh Fringe and has now transferred to the Southwark Playhouse for a short run. In it playwright Jonathan Holloway has turned Dr Jekyll into a woman conducting mysterious experiments the result of which are graphically revealed towards the end of the piece.

The Jekyll and Hyde story, still set in Victorian times, is introduced by two sort of narrators the premise being one is trying to buy Jekyll's diary from the other. They also play various instruments - a live soundtrack to help generate atmosphere to this supposedly creepy and grim tale.

The problem is that the notes in the programme from director Jessica Edwards make the play sound far more interesting than it actually is. The characters feel under developed, for example, Edwards would have us believe that the female Dr Jekyll violently alters herself as a response to the restrictions on women during the Victorian age when, in fact, her behaviour just comes across as a bit odd and the plot overly contrived.

Continue reading "Review: Jekyll and Hyde at the Southwark Playhouse" »

Review: Max Irons in Farragut North at the Southwark Playhouse

He was the charming, womanising medieval King Edward in the small screen adaptation of The White Lady but now Max Iron's has turned his attention to a charming, potty-mouthed political PR in Farragut North, the Beau Willimon play currently in preview at the Southwark Playhouse.

There are no swords and and armour here instead the characters use rhetoric and guile to manipulate voters in a Democrat caucus.

Irons plays Stephen the bright and talented communications manager whose loyalty to his campaign manager, Paul (Shaun Williamson), is tested when the campaign manager of the rival candidate offers him a job.

Willimon's script is sharp and punchy and deserves a delivery to match. This is play of high drama and tension and the soupçon of nerves visible from the cast (this was the first preview) only added to the atmosphere.

Irons' Stephen oozes the necessary charm to make his success and confidence believable but it is as things start to fall apart that we see a darker less composed and ultimately more interesting side to the character. There were a couple of forgotten lines but it is nonetheless a convincing performance, winning the audience over despite the characters obvious flaws.  And, no doubt, he will relax and gain more confidence as the run progresses.

There's a nauticaul theme developing at the Southwark Playhouse. Next week Titanic opens to previews in The Large and last night Billy Budd opened in The Little.

Covered in dirt, sweat and blood that reminded me of another nautical play Southwark put on, Hairy Ape, good soul Billy is impressed upon a Navy ship that is sailing off to fight the French.

Adapted from Herman Melville's novel Billy (Charlie Archer) is an orphan, a stammerer and a simple and gentle soul who sees the good in everyone but that doesn't mean he can't handle himself, quickly winning over moody, bully Jenkins (Iain Batchelor) by standing up to him.

But there is one person Billy just can't win over: Claggart, the man at arms (Gerrard McArthur). The relationship between these two men is fascinating. While the rest of the crew can see that Claggart is out to get Billy, Billy think he is his friend.

Why Claggart takes a dislike to Billy is the sort of thing that would come up as a question on an English exam or give psychoanalysts hours of couch time, such is the subtext in their encounters.

Is Claggart afraid of Billy because Billy isn't scared of him? Does Billy's goodness remind him of what he lacks? At times I was reminded of that line Gertrude says to Hamlet in the closet scene: "Thou turn'st mine eyes into my very soul".