Did Electricity by Barefaced Theatre electrify? 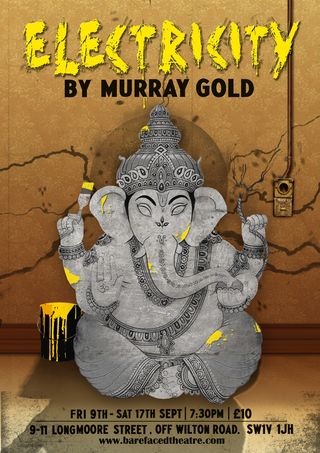 The last time I went to a site-specific theatre production, I think I described it as two hours of my life I would never get back. That had little to do with the location, although a dull and nondescript office is not an encouraging point to start but more to do with the quality of the writing and acting.

Electricity is written by Murray Gold who is a seasoned writer for both stage and radio (David Tennant has 'appeared' in one of his radio plays, little fact-ette there for DT fans) so the writing was definitely a step up from my previous experience. And so was the acting, almost uniformly good.

But what of the setting? Well to put it in context, the play revolves around three men: Leo (Mansel David), Jakey (Anthony Dunn) and his son Bizzy (Zachariah Fletcher) who are decorating a room in Katherine's flat (Berri George). It's going to be a 'quiet room' with fountains and a statue of Hindu elephant god Ganesh.

It's performed in an old office space on a semi-residential street in Victoria, accessed via a plain door and narrow stairs. There are wires hanging out of the ceiling and protective sheeting over the floors and surfaces as well as paint tins and decorating paraphernalia.

The quiet room is taking shape, marked out by freshly painted orange walls (you can still smell the paint) and stencils taped to the wall. You certainly feel like you are sitting in the middle of decorating project. (And unlike other site-specific performances I've been to, there is a bar at the interval.)

There are two interwoven threads to the story. Leo is having problems getting a decent days work out of Jakey and Bizzy who seems to suffer from something akin to autism. The job is already running way over schedule not helped by Katherine's restrictions on when they can turn the power and water off.