Review: Faith Healer, Old Vic In Camera - when 'Zoom theatre' truly comes into its own

I miss sitting in a theatre and watching a live performance. I miss it terribly. But the Old Vic's latest In Camera production - Brian Friel's Faith Healer - not only worked really well as a live stream, it might have worked better. 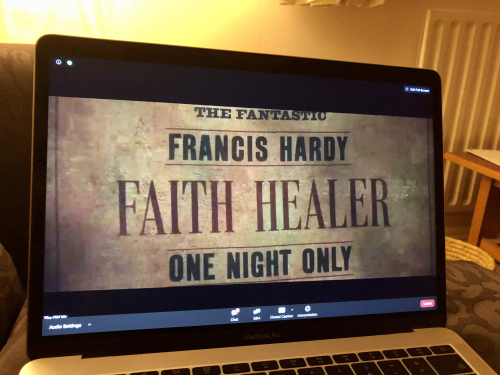 The 'curtain' during scene changes

I've seen the play before, a production at the Donmar Warehouse in 2016, its format is four monologues told by three different characters all recounting the build-up to a fateful night in a pub in rural Ireland with each having a contrasting take.

The faith healer of the title is Frank Hardy (Michael Sheen) who travels around healing people with his wife Grace (Indira Varma) and manager Teddy (David Threlfall) tow.

Frank questions his ability to heal. He tells us he just knows when something is going to happen and when it is not. His success rate hasn't led to fame and fortune rather, it's a tough life on the road sometimes sleeping in the van.

Is his 'ability' genuine or a truth he tells himself or a con?

Both Teddy and Grace have something that resembles faith in his healing.

Teddy refers to it as a 'talent'. His background is in managing seemingly improbable - and amusing - variety acts such as Rob Roy, the bagpipe playing whippet.

Yet there is no perceived irony in how he talks about Frank or any of his 'acts'.

The Young Vic is celebrating its 50th birthday and while I've only been visiting since 2007-ish, I've seen many fantastic and memorable plays there in that time. 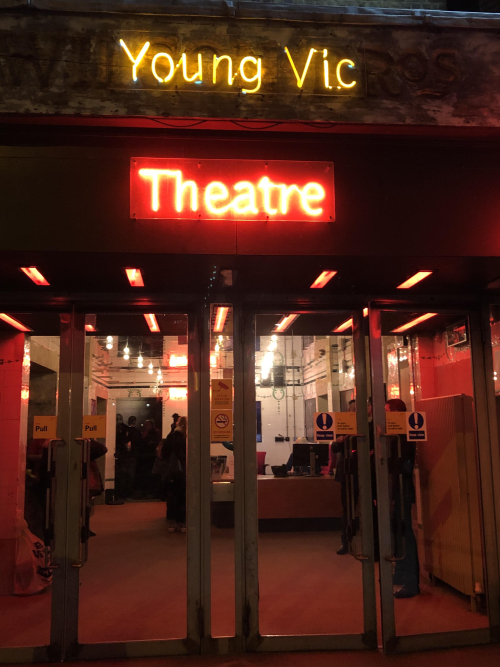 So I've been on a bit of a trip down memory lane and dug through my archives to pick out some of my favourite productions.

Genius writing by Stephen Adly Guirgis and the cast didn't waste a word of it. The play took you in an unexpected direction and left you questioning your thoughts and reactions.

Aside from being an epic two-parter which is full of laughter and pathos, I also have a fondness for this play and production because I saw it on my birthday. (And I prefer it to Angels in America but shhh don't tell anyone.)

A fantastic solo performance by Erin Doherty, and a story that simultaneously gave you faith in mankind and utter despair.

The first word that came out of my mouth after watching this Simon Stephens play was "fuck" - for good reasons.

Review: Andrew Scott in Three Kings - a master in storytelling, compelling and gripping

If you've ever seen Andrew Scott perform Simon Stephens' monologue Sea Wall you'll know he is a master storyteller, deftly lifting words off the page and turning them into something compelling and gripping. 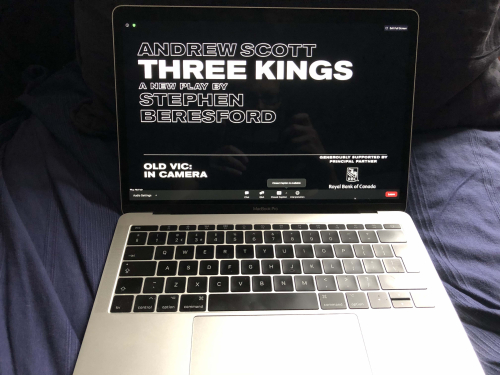 Created especially for the Old Vic's In Camera, it is described as a scratch performance but only the lack of embellishments like set and fancy lighting give any sign of this.

And who needs any of that anyway when you've got 60 minutes of you and Andrew Scott, albeit seen from the other side of a screen.

Like Sea Wall, the power is in the story as it is told. And it is a powerful piece Scott drawing out the humour and heartache in equal measure.

Three Kings is about the relationship between a son and his an estranged father.

He meets him briefly at 8 years old but the meeting leaves an indelible mark which will go on shaping their relationship for many years.

His father leaves him a challenge of solving a puzzle involving three coins - the Three Kings of the title.

But it more than a simple test of puzzle-solving, solving this puzzle is hugely weighted.

I saw Uncle Vanya starring Toby Jones and Richard Armitage at the Harold Pinter Theatre at the beginning of March and loved it so much I was going to try and get another ticket but then lockdown happened. 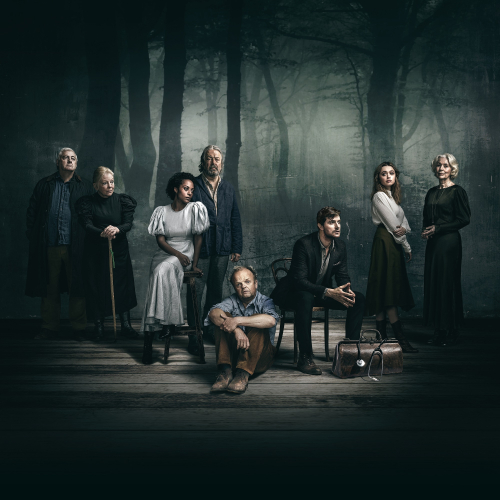 Much excitement then that the production is coming back. It's been filmed on stage with almost the entire original cast (Roger Allam is stepping in for Ciaran Hinds).

It's not a straight-forward film version of the stage production instead it has been directed for the screen by Ross MacGibbon in "a sumptuous re-interpretation of Ian Rickson’s stage production".

The filming took place under strict Covid-19 secure, independently drawn up protocols, with the cast self-isolating and undergoing regular tests and the crew in masks, PPE and socially distancing throughout the process.

It will have a cinematic release before being broadcast by the BBC.

For more details head to https://unclevanyaplay.com/.

Can't wait to see it again in this new version.

It will be interesting to see if other productions that had to close follow suit. What would you like to see back in a filmed version?

Review: F**k Off, Bread and Roses Theatre - real live theatre for the first time in 5 months

I sat in a theatre and watched actors performing on a stage this week for the first time since the beginning of March. It was wonderful and strange and made me realise how the pandemic has changed the experience.

The play was called F**k Off, at the Bread and Roses pub theatre in Clapham. Kudos to Integrity Theatre for taking the gamble and planning the production without knowing if live performance would be allowed.

Henry (Michael Dunbar) is the protagonist of the piece; a boxer trying to make a comeback, training hard and trying to get his head in the right space.

A win in the ring would mean money and opportunities.

But outside of the ring, it is complicated. His ex has moved on, there is a court case, an absent father who wants to get back in touch and a trainer who has a dodgy side-hustle.

All good threads for creating tension and drama in Henry's story, shaping the character, except they leave more questions than they answer. 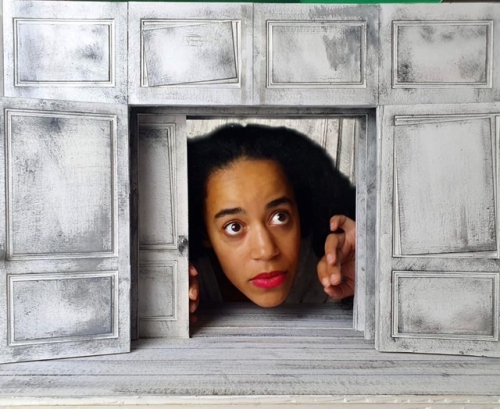 Described as a virtual theme park, this is part interactive theatre, part style your own adventure, part video game and it is enjoyed from the comfort of your own living room.

Based on Lewis Carroll's famous stories of Alice in Wonderland and adapted by Zoe Seaton and Charlotte Keatley this has all the well-known characters and familiar scenes of the books.

It is imaginatively brought to life in the style of an old fashioned fairground with a combination of high tech wizardry including AI and good old fashioned theatre craft and entertainment.

We join Alice (Leda Douglas) via a Zoom call to be transported into her fantasy world. Fairground music sets the scene for the roller-coaster adventure to come and for the first part of the show you get to choose where you want go and explore.

A click on an icon takes you off to meet characters including the Mad Hatter, twins Tweedledum and Tweedledee and the Mad March Hare in their Zoom rooms with their own stories and entertainment.

Don't dither in your choices though as you may miss bits.

Is it ironic that in going to the theatre with strict social distancing in place, I felt closer to an actor than at any time before? 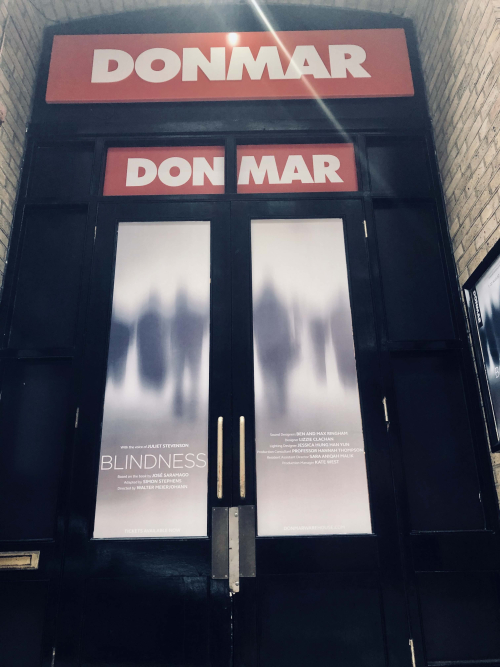 The Donmar has opened its doors, the first major theatre in London to do so, but with live performance still not allowed it has created what is an extraordinary experience using sound.

Blindness is adapted by Simon Stephens from a novel by José Saramago and tells the story of an epidemic in which people suddenly go blind.

Juliet Stevenson plays the narrator, then the doctor's wife, the only person who can still see as  society struggles to cope with its sudden predicament.

The Donmar, partially by design and partially by necessity, has been stripped back so that it is both familiar and different.  The bar is stacked with boxes and equipment and stage and seating have mostly been removed from the auditorium - there are still some of the benches stacked against one of the walls.

It's transformed into an open space with pairs of seats strategically placed across the floor for social distancing but facing different directions.

Back at the theatre at last...to see socially distanced stand up comedy at Battersea Arts Centre

When theatres had to close in March, I thought it might be a month or two before I was back watching live performance again. 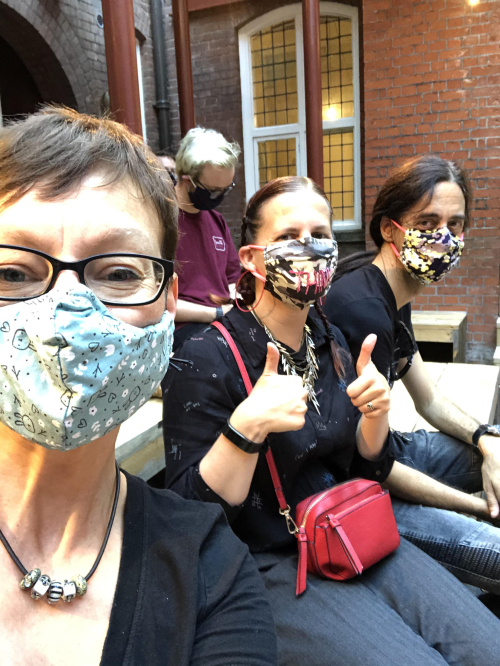 As the weeks passed, it became obvious that it was going to be much, much longer and I stopped thinking about when I might return.

Did I imagine, that at the beginning of August I'd be sitting on a wooden bench wearing a mask with 30, socially distanced, others waiting for a live performance to being?

The live performance was a series of stand-up comedian's headlined by Ed Gamble and wooden bench was in a courtyard at Battersea Arts Centre.

With indoor theatres still closed, it is a genius use of outdoor space which also has a balcony level where some more people could stand.

Continue reading "Back at the theatre at last...to see socially distanced stand up comedy at Battersea Arts Centre" »

I asked and you answered: The one play you'd go back to revisit if you had a time machine

And here are some of the choices from the good theatre fans on Instagram - interesting that After the Dance came up more than once...

No surprise, but 2010’s After The Dance at the NT. I just loved everything about it so very much.

I'm going to go for The Glass Menagerie at the Young Vic. Just something beautiful about that production. Would have to be staged somewhere different of course, couldn't have something like that at the YV now.

Tom and Clem with Alec McCowen and Michael Gambon. It ran for a few months in 1997. About Tom Driberg and Clement Attlee. Remember it with great affection and with Alec gone and Michael retired, I'd love to see it again.

Continue reading "I asked and you answered: The one play you'd go back to revisit if you had a time machine" » 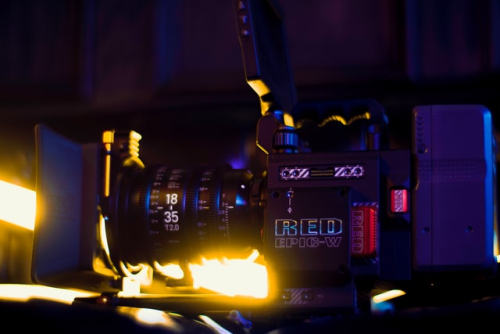