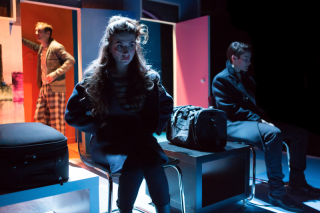 There is a scene in Jon Brittain's Rotterdam when Fiona (Anna Martine Freeman) is on the telephone to her parents. It is New Year's Eve and she is telling them she thinks she's a man. You can't hear what her parents (and grandma) are saying but it is written and performed in a way that you can easily imagine. It is a brilliantly observed - there are aspects of the conversation many people will relate to - and imagined. It is a scene that is funny and tender, it makes you laugh and puts a lump in your throat. And that is everything that is brilliant about Rotterdam as a play in that moment.

It is a play that started life in pub theatre and is now on it's third London transfer (via a stint off-Broadway) and tells the story of lesbian couple Alice (Alice McCarthy) and Fiona who've been together for seven years, living as ex-pats in Rotterdam. We join them the day before New Year's Eve as Alice is plucking up the courage to come out to her parents but Fiona has her own announcement to make. It is reflective of their personalities that while Alice, dithers and over-thinks Fiona blurts and moves forward at a pace like champagne leaving a shaken bottle.

Fiona's brother Josh (Ed Bales-White), who also lives in Rotterdam, takes her decision in his stride and her conversation with her parents is easier than she anticipates, getting accepted as a man and the impact on her relationship with Alice - and how it makes Alice feel about her own sexuality - is less straightforward.