Not an easy watch: the harrowing Purge @Arcolatheatre Sofi Oksanen's Purge isn't an easy play to watch, particularly in the small, intimate studio space at the Arcola. But this harrowing story is nonetheless interesting and compelling.

Set in Estonia and spanning the middle to late period of the 20th century it is personal story of love and survival wrapped up in the history and politics of the time. If you know nothing of this eastern European country's history then it is worth investing in a programme (£1.50) for the whistle-stop timeline to put the story into context.

The play opens with a harrowing film clip of a blindfolded woman being physically and sexually abused by unidentified men. We then jump to the remote country home of elderly woman Aliide (Illona Linthwaite) who finds a dishevelled, battered and inappropriately dressed young woman Zara (Elicia Daly), asleep in her yard.

Zara, it turns out, is on the run but her past has parallels with Aliide's.

Flipping back and forth in time, the story of the two women's lives unfold, shaped by a horrific period of occupation and oppression, when survival means making the toughest of decisions. In helping Zara, Aliide has to confront her past and choices she made.

This is an emotionally wrought, stark piece, the fear and danger like an ever present extra character.  A compelling piece, at its heart it is a story about the lengths you'll go to for those you love.

There are some great performances and one or two that feel slightly too big for the intimate performance space of the Arcola's studio my only other slight grumble is the late start time (8pm) for a play that is over two and a half hours long (some of us mere mortal audience members have to get up for work the next day).

Enjoyable probably isn't the right word  for Purge but this is a great bit of theatre and I am going to give it 4 stars.

Purge runs at the Arcola's studio space until March 24.

Did Danton die a Death? 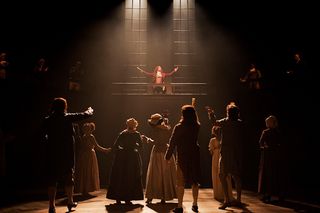 Any play that has a working guillotine on the stage is always going to score points with Rev Stan (and if they have blood all the better). But I get ahead of myself. Danton's Death is as the presence of Mme G suggests about the French Revolution, a period of history in which my knowledge is at best sketchy.

The story picks up after the monarchy has been overthrown and Danton (a long-haired Toby Stephens), one of the leaders, is kicking back and enjoying the newly won liberty. He believes enough blood has been spilled and it is mans duty to enjoy the life given to them. Danton's living life to the full mainly involves wine, women and, well, he doesn't actually sing but there is definitely a lot of wine and women.

One of his fellow leaders of the revolution, Robespierre (Elliot Levey), is the antithesis of Danton. He feels their liberty is still threatened by the affluent classes and its foreign sympathisers. He also feels that the decadence and immoral behaviour of Danton and his friends is an affront to that newly won liberty and modesty should prevail in all things.

And so the stage is set for a political show down as the two men of words and their followers battle for their ideologies. Robespierre as a member of the Committee of Public Safety has Danton arrested and sets about trying to get him convicted and sent to the guillotine.

Danton, woken from the lethargy of his extended post-battle reveries, fights to save his head. ***Plot spoilers*** But, despite putting forward a good case, it isn't a fair fight. Robespierre, 'the incorruptible' as he is dubbed, has used all his influenced to nobble the jury and proclaim emergency statues that basically make Danton and his cronies' defence treason.