Straight review: The stars allign to produce one of my favourite plays of the year 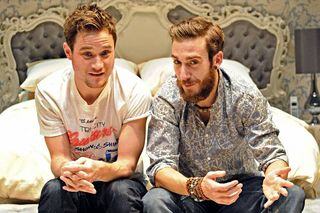 I hate to use the word perfect because if you look hard enough you will inevitable find a flaw but both in watching and on reflection I can find nothing bad to say about DC Moore's play Straight. It is as if the stars of script, direction and performance aligned.

Lewis is married and thinking about starting a family with his wife Morgan (Jessica Ransom). Waldorf burst into their settled idyll - well cramped studio flat - with tales of adventure and sexual exploits. To say that Lewis re-evaluates his own life as a result would be doing the plot a disservice but I think to explain the challenge and how it changes the men's friendship and the relationship between husband and wife would be too much of a spoiler

Straight is an adaptation of the film Humpday and what you get is a script crackling with wit, humour and carefully observed behaviour. It was interesting and intriguing and under Richard Wilson's direction performed with perfect pitch - an achievement considering it is essentially a comedy about sex. It is laddish without being crude and exploitative; a situation that is contrived without being farcical, funny without being silly.

Continue reading "Straight review: The stars allign to produce one of my favourite plays of the year" »

The critic vs blogger debate is a well trodden path and I can't be bothered to re-visit the arguments - I'm sure one of the critic-bloggers can be relied upon to bring up the topic again at some point in the not too distant future.

What does interest me in the whole theatre and the social media discussion though is how it is moving beyond bloggers writing reviews before or after press night.

More and more theatres are cottoning on to the power of the internet and I don't mean having a website through which you can buy tickets, I'm talking about Facebook, Twitter, blogs and YouTube.

The National Theatre, Donmar Warehouse and Royal Court are just three to have Facebook pages using them to post links to reviews, productions photos, videos, news and more. It not only acts as a promotional tool generating interest in productions weeks before they open but also a news outlet and means of interacting with audiences.

And there are a growing number of theatres with Twitter accounts too. Today an email from the Bush Theatre in West London took social media usage to a new level. Included in the usual marketing blurb about its latest production The Kitchen Sink was a link to a hash tag search on Twitter:

It is the first time I've seen this done but essentially what the Bush is doing is linking to audience opinion about the play. And it is still in preview. It has decided to promote the views of the audience ahead of the critics. Of course I can't imagine them doing the same thing had the comments been stinkers but it certainly puts a different spin on the critic vs blogger debate.

Did The Aliens cough up a storm*?

First visit to the lovely little Bush Theatre where it's so small that I could see, clear as day, the shock on the face of the elderly lady sat on the opposite side of the stage when one of the characters asked another: "Did you finger her pussy?"

And what makes it all the more special is to see actors such as Mackenzie Crook (in vain hope I scanned the audience for his pal Johnny D) and Ralph 'Anthony Royle' Little so close, they are a step away from sitting on your lap.

It is also great to see such a small space turned over so thoroughly to the plays setting: a cafe's back yard complete with gravel, wheelie bins, graffiti-decorated corrugated fencing and grill covered back door.

The rest of the stage setting is simple, a couple of beat up chairs and a pile of crates that doubles as a table.

So all the ingredients were there it just needed a fine play to turn it into something tasty. And it is a fine play, well the second half is. The first half establishes Jasper (Crook) and KJ (Little) as a couple of slackers or layabouts as the elderly lady would have probably called them. They spend their time hanging out at the back of the cafe, talking about a bit of this and that namely poetry, Jasper's ex and the novel he's writing and gently teasing, the impressionable 17-year old Evan who has just started working at the cafe.

Continue reading "Did The Aliens cough up a storm*?" »

Play with a health warning: The Aliens, Bush Theatre

Just got an email through from the Bush Theatre about its play The Aliens which I'm booked to see with @polyg a week on Saturday. As well as the running time it had the following warning:

Obviously I shall endeavour not to be offended by the strong language as someone who never so much as allows a 'blast' to cross her lips. Ahem. But I'm curious about the cigarettes warning. I don't smoke 'real cigarettes' or even unreal cigarettes but it wouldn't make me think twice about seeing a play. Would anyone else be put off and demand a refund? Or is it that much of a health threat to someone who say suffers from asthma?

Usually the warnings are posted in the theatre presumably because it's a legal requirement. Anyway I shall endeavour not to succumb to a fit of coughing when any of the actors light up now I've been warned.