10 things I learnt on the @royalcourt building tour yesterday 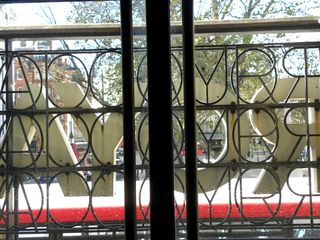 1. The concrete walls have won awards - look closely and you can see the wood grain from the boxes they used as moulds for the blocks.

2. The Royal Court was a receiving theatre and is now a producing theatre.

3. It's the only theatre in the country which accepts unsolicited play scripts which are all read. If you send your play script to the National Theatre they will tell you to send it to the Royal Court.

4. As a theatre that fosters writing talent only the playwrights get star billing, none of the actors do, no matter who they are.

5. Rehearsing is done on site in a room created in the eaves of the building that was originally earmarked for offices; auditions are conducted on site too.

6. The grilles which act as window decoration in the stairwell to the Jerwood Upstairs were originally the drains in the ladies loo

7. The trapdoor for the Jerwood Upstairs is accessed from the theatre's offices underneath (I want to work in that office) 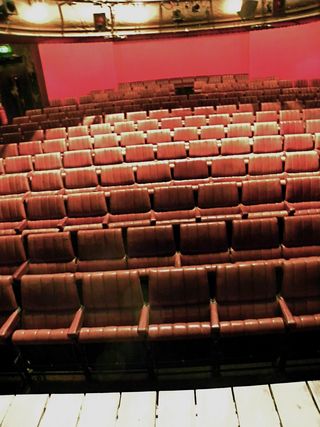 8. There is actually no stage at the Jerwood Downstairs, the boards the actors tread are specially made for each production which gives the theatre more flexibility and a quicker turnaround between productions. (When we stood on the stage yesterday, which is set up for Haunted Child, you could see through the cracks to the rather large space below which was a little bit unnerving).

9. In the stalls, the very back row is known as 'writer's row' because that's where the playwrights watch their plays being performed during preview, chosen so they can make a sharp exit at the end.

10. The Jerwood Upstairs was originally a private members club to get around laws that required all play scripts to be approved and therefore potentially edited and censored before they could be performed.

Tours around the Royal Court Theatre are conducted about four times a year and cost £7. Numbers are limited so booking in advance is recommended. The tour lasts 90 minutes and I can thoroughly recommend it.

The day of theatre tours and why it's good to ask 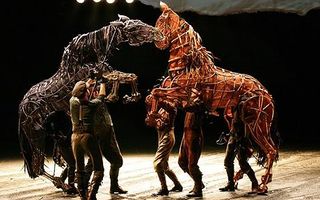 Had my friend Chris staying for a few days this week and on Thursday we ended up doing not one but three theatre tours. Two by design, one by chance.

The National Theatre backstage tour and The Globe tour and exhibition were the two by design and the New London Theatre, where War Horse is playing, by chance but I'll come onto that.

I've done the National tour before and it is excellent. You spend 80 minutes with an enthusiastic guide going behind the scenes to get a flavour of work that goes on. I've done it before but each time it is different as there are always the sets of the current productions to get up close to (Frankenstein being the draw this time although they were setting the lights so we couldn't go on stage, just behind it) as well as what is being made for upcoming productions.

In the set workshop we saw some of the forthcoming Cherry Orchard set and props being worked on as well as the set model and some of the back drops being painted for One Man Two Guv'nors. We were also lucky enough to catch a brief glimpse of the cast of the latter, including James Corden, in one of the rehearsal rooms, just before the shutters were brought down to obscure them from view.

It is certainly worth the £7.50 particularly if you have seen or are seeing one of the plays on stage at the time. Or maybe it's just me and my fascination with all things theatrical?

Dressing rooms and where to celeb-spot in Stratford

Right finally got time to sit down and go through my photo's from the preview tour of the RSC's new theatres in Stratford.

First can I say 'wow'. I love the way they've melded the old with the new keeping some stunning features like the gothic Victorian staircase in the Swan Theatre and the art deco ticket booth from the Royal Shakespeare Theatre.

I also think it's great that they've recycled bits that couldn't stay in situ. For example the wood that graced the stage has been relaid in one of the bars so visitors get to tread the famous boards themselves.

There is some great artwork too. I particularly liked the oil painting of a scene from Richard II in which he gives his last soliloquoy standing under pouring sand - at least that's the performance and production it reminded me of if it isn't (there is a picture in the slide show below). There is also a great explosion of pages from Shakespeare's complete works in one of the bars. It looks like the pupils of Hogwarts have been having a bit of fun with their magic skills (also have a pic).

Of course my favourite bit was nosing around the dressing rooms. Each has a balcony overlooking the River Avon so if there's a matinee on, in warmer weather, a slow stroll along there might yield some good actor-type spots when productions return to the theatre. (The first full productions will be existing shows when they return from the RSC's London season in February and then the first productions-designed specifically for the new space start in the spring.)

Continue reading "Dressing rooms and where to celeb-spot in Stratford" »

This weekend is London Open House and @polyg managed to get us booked onto the Almeida Theatre tour.

I love backstage tours, going to all those parts of the theatre you never normally get to see. Finding out a few tricks of the trade and just getting a sense of what it must be like backstage while you are sat out front enjoying the fruits of all the labour.

My favourite bits are always the green room and the dressing rooms of which there are four at the Almeida. There are always loads of personal items, good luck cards, family photo's and the like, it's when I feel at my most voyeuristic on these tours spying on a world and a side to the actors I'm not supposed to know about.

It's also where you get a bit of an insight into life backstage before, during and after a performance - the futon bed in the corning for naps between the matinee and evening performances and the fridge stocked with favourite items in the green room.