The National Theatre's Lyttelton stage has been transformed with steps and terraces around the performance space, creating a look that is a cross between an ancient greek theatre and a fighting pit. 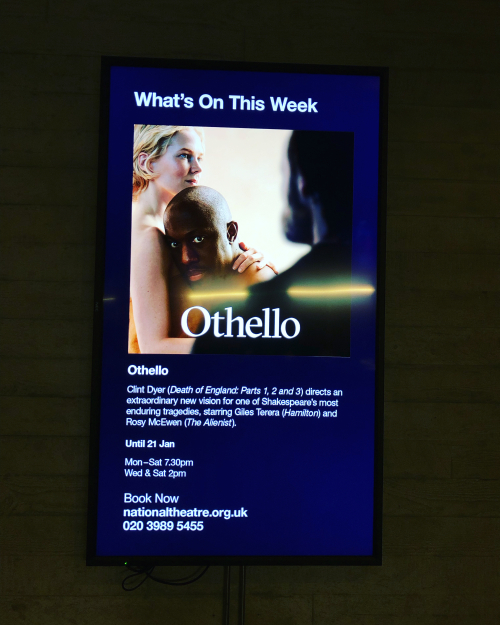 Before the play starts, images of past productions of Othello and the year they were performed are projected onto the steps and back wall as a reminder of the story's timelessness.

When the play begins an angry mob confronts Othello (Giles Terera) about his marriage to Desdemona (Rosy McEwan), and one of them holds a rope tied into a noose. It's a startling reminder of the lynch mobs of the not-too-distant past.

The production is consciously white, with Terera the only person of colour in the cast. It serves to emphasise the racism and jealousy that fuels the tragedy and Othello's isolation.

A sort of chorus - called 'system' on the cast list - is almost permanently present on stage, either seated or standing on the steps. They are like the personification of an infection, the sickness of emotions that grows in Othello's mind synchronising their jagged and exaggerated movements.

And there is something that is part creepy, part peaceful in how they gather and sit with Othello as he dies.

Paul Hilton's Iago is played with the chill and wit of a good comic book villain. The system moves and are animated by what he says and does; sometimes, there is something grotesquely comic in how they respond.

Anna Coombs' adaptation of Shakespeare's Richard II sees the story slimmed down for five actors, with three of the cast playing more than one character. 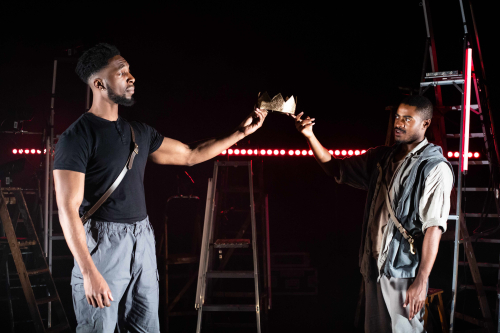 It focuses the attention on King Richard (Daniel Rock) and his cousins, the loyal Aumerle (Lebogang Fisher) and Henry Bollingbroke (Raheim Menzies), and the power tussle between them for the crown.

The production sets out its stall dressing the stage with step ladders of various heights. Who will climb, and how high will they go?

From the opening scene, where Henry accuses Mowbray (Sibusiso Mamba) of lying and murder, and Richard flip-flops over his decisions, it's a one-sided fight in terms of who is most suited to lead, but with this position of power, it's more complex than suitability.

It is the first incident that chimes with contemporary British politics of the last few years.

Menzies' Henry is a born leader, he is level-headed compared to Richard, and his campaign for what he is entitled to feels just next to the King's abuse of power.

He seems thoughtful and considered, while Richard makes decisions on a whim and falls into poetic whimsy. His justification for what he does is a divine right; he is anointed in holy oil at his coronation, after all.

There's a line towards the end of Rona Munro's play, Mary, that changes your perspective of the central character, Lord Melville, played by Douglas Henshall. 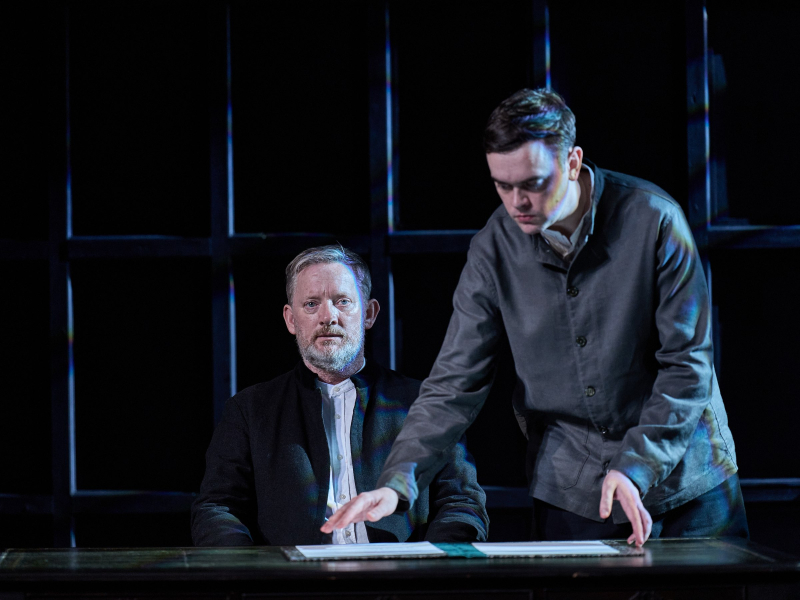 Set during the turbulent reign of Mary Queen of Scotts, Melville is her most loyal advisor. But, with a string of scandals and seemingly bad choices threatening her position, Melville is under increasing pressure to turn his back on the Queen.

The play is a series of increasingly tense conversations between Melville, Thompson (Brian Vernel), who has risen rapidly up the ranks at court and Agnes (Rona Morison), a maid and vocal Protestant.

Thomspon and Agnes have little sympathy for the Queen and believe Scotland would be best served if she abdicated.

Can Melville win them around to his way of thinking and onto the side of the Queen, or will they convince him that putting the infant prince James on the thrown with a regent is the better path?

Queen Mary (Meg Watson) makes only two brief appearances and says very little, but her presence is a constant throughout as every decision, every look and smile is analysed and interpreted.

Simply staged with a wood-panelled backdrop, two chairs and later a desk, the focus is firmly on a debate about the Queen's suitability to rule.