King Hamlin at the Park Theatre starts before it begins with three teenage boys joshing around; it's noisy and boisterous with an undercurrent of tension. 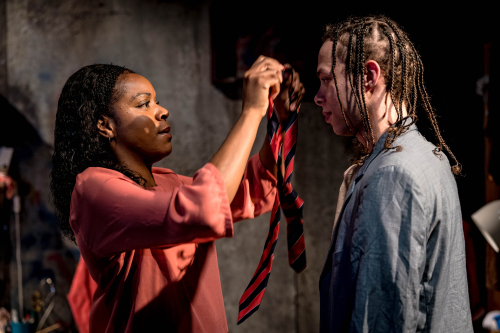 When the play formally starts, Hamlin (Harris Cain) is having a nightmare about being late for a job interview. He wants to help his mum (Kiza Deen), who has just lost her job and can't get benefits for five weeks.

They have a good relationship, and Hamlin wants to finish college, go to university and become a software engineer.

But circumstances start to conspire against him. His mum can't afford wifi, he doesn't have a laptop, and he's losing out on job opportunities because he can't work from home.

Added to this, the area he lives in is rife with gangs, making it a dangerous place to be as a young male.

There is an element of pride in that Hamlin doesn't want to work in a supermarket but do something that is less manual - and paid better.

Would it have mattered if he had got any old job?

His friend Quinn (Inaam Barwani) is, by his own admission and his behaviour, not cut out for studying and college but has a proposition for Hamlin which could help solve his money issues.

Review: David Tennant in Good, Harold Pinter Theatre - "there is a brutal and uncomfortable honesty in the absence of bravery and action"

A victim of rescheduling because of theatre lockdowns, Good, starring David Tennant, finally gets in front of an audience but is it worth the wait? Tennant is a household name because of his screen work, but he is also a seasoned stage actor, taking on an eclectic mix of roles from Hamlet to Don Juan in Soho, so expectations are high.

Good is set in Germany during the rise of Nazism and the Second World War. Tennant plays John Halder, a literature lecturer, novelist and liberal. His best friend Maurice (Elliot Levy) is Jewish.

John has a busy life; his elderly mother has gone blind, his wife can't cope with the day-to-day, and he suspects a mutual attraction between him and one of his students (all played by Sharon Small).

He is a mild and ordinary man in many senses; he works, he visits his mother, cooks for his family, is a hands-on dad and spends time with his friend.

Through his verbalised internal monologues, we see his human flaws; the lapses of attention and care when he's talking to others instead focusing on himself. And he falls into an affair with his student.

He's not a perfect human but what you might describe as good at heart.

However, Cecil Philip Taylor's play puts the idea of 'good' under the spotlight exploring the slow and subtle indoctrination into Nazi ideas.

John is an inert character in that he doesn't seek out change or advancement in his life and career. He responds to what comes his way but doesn't challenge or resist. He believes that the Nazi's abhorrent policies will be short-lived - something to 'distract the masses'.

Continue reading "Review: David Tennant in Good, Harold Pinter Theatre - "there is a brutal and uncomfortable honesty in the absence of bravery and action"" »

Written by Peter Oswald and Alexander J Gifford 'after' an unfinished play by Friedrich Schiller, Dmitry is the story of the much loved, youngest son of the Tzar of Russia who was murdered - or was he? 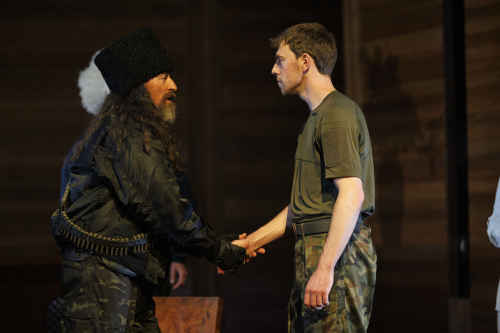 Years later, when a young man turns up in Poland wearing Dmitry's jewelled crucifix but knowing nothing of his past other than he grew up in a monastery, people believe he is the beloved Tzarevich and rally behind him.

It is a story about identity and what that means against a backdrop of religious and political manoeuvring. It's also a play about the future direction of Russia as Dmitry (Tom Byrne), backed by an uneasy alliance of Polish Catholics and Russian Orthodox Cossacks, marches on Moscow to claim his rightful place as Tsar.

And it's a bold play to launch the new 200-seat Marylebone Theatre, bold in that it clocks in at nearly 3 hours (including an interval).

At times it rocks along at a satisfyingly rapid pace with plotting, countermoves and in-fighting. The sense of jeopardy grows, although it's not a case of 'if' but rather 'when'.

But at other times, it is loaded with stodgy exposition and wordy speeches, that do little to move things along.

There are some odd production choices which pull you out of the story. Modern costumes, grungy heavy metal music and sporadic segments of movement give it a contemporary feel but the performances and delivery often feel like it would sit better in a more traditional production. It didn't quite gel.