There is a scene in Eureka Day at the Old Vic during which the audience is roaring with laughter, but it isn't anything to do with the actors who are on stage or what they are saying.

And it isn't a mistake, it is intended, and it's a genius scene for a couple of reasons, how the actors carry on regardless and the relatable source of the comedy. 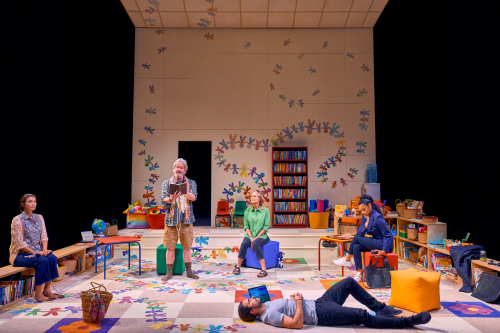 Eureka Day is the name of a private school in Berkeley, California, which is welcome to all children. That is until there is a health crisis which tests the ideas and values of five members of the PTA.

At first, the play is a satirical stab at the 'woke' left as they debate the appropriate racial groups to reference on the school's website. Everyone is seemingly doing their best to listen, suggest, understand and reach a consensus without causing offence. And it raises a good few laughs.

Of course, the irony is that they are so busy demonstrating what the school stands for and its inclusivity they don't realise the voices they are trying to include are getting stifled.

However, when a child at the school comes down with mumps, the play shifts gear into the debate around vaccines.

Where it gets very funny is at an emergency meeting about what to do, conducted via live video call with the rest of the parents. The PTA are huddled around one laptop, remaining polite and respectful to each other's views.

Then on the back wall of the classroom set, the comments from the video chat start popping up.

At first, it is a mixture of gossip, random remarks and polite comments about vaccines, but it soon descends into chaos, a mixture of wacky ideas, passive-aggressive comments and plain insults about each other's views.

Review: Rose, Park Theatre - a story of a life of love and tragedy told with wit and humour

Martin Sherman's play Rose at the Park Theatre is framed by two identical killings decades apart, and the titular character witnesses both. Played by Dame Maureen Lipman, Rose sits Shivah on a wooden bench, reflecting on her life.

Born in Ukraine in the 1920s, it is a life of searching and surviving; she moves towards the excitement of Warsaw as a teenager, and when the Nazis arrive survives by hiding.

After the war, her searching and surviving continue taking her across Europe and then the US via Palestine. Once in America, she moves driven by economics and opportunity.

But while this is a life shaped by brutal war and racism, it is also a life of love, romance, and humour. Rose, as played by Lipman, is witty and deadpan.

"I have only vague, wandering images of my childhood, but yesterday - I remember everything single thing about yesterday. Nothing happened yesterday."

She is not shy about the details and talks about love and sex almost in the same tone as losing loved ones. There are occasional emotional outbursts - anger and tears - but mostly, she is matter-of-fact, her vitality as a person expressed in her actions as described - and that humour.

Continue reading "Review: Rose, Park Theatre - a story of a life of love and tragedy told with wit and humour" »

Review: The Clinic, Almeida Theatre - an intoxicating and befuddling brew

Tea drinking features heavily in Dipo Baruwa-Etti's posh kitchen-set play The Clinic at the Almeida Theatre. But this tea may or may not have intoxicating or calming effects; even those who fervently dislike infusions get a taste for it. 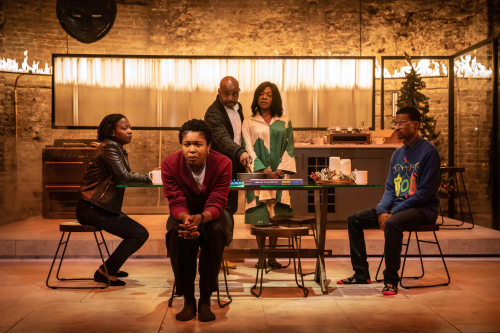 And that is The Clinic, a mix of contemporary family drama and something more difficult to put a finger on.

The dialogue crackles and sparks; this is a familiar family dynamic that is a mix of love and frustration. There are harsh jibes and sharp digs centring on politics and activism.

Segun is a therapist and author, and Tiwa volunteers at a women's refuge. They have made a comfortable life for themselves and vote Tory. Bayo is in the police, Ore is a junior doctor and both vote labour. Amina is a labour politician.

Job choice comes under scrutiny, as does who is best placed to force change and drive racial equality and what is the most effective tactic. Sparks fly in a fierce, passionate, angry debate that quickly spills over into hurtful remarks.

Into this mix comes Wunmi (Toyin Ayedun-Alase), a suicidal widow with a baby, whom Ore thinks her parents can help.

I can now say I've seen Kate Winslet and Leonardo di Caprio on stage. OK, so they were on telly on stage, but that is technically on stage. Kate and Leo were in Titanic mode, the favourite film of the son in Who Killed My Father. His homophobic father initially refuses to get him the video for his birthday.

Father and son are both played by Hans Kesting in this Ivo Van Hove adaptation of Édouard Louis' novel. The son is visiting his dying father and reflecting on his life, what shaped him and ultimately brought him to an untimely death.

Kesting differentiates the two using postures, cigarette breaks and stuffing fists up his jumper to indicate a protruding belly. He flits seamlessly from one to the other. There are shifts in energy too, the play covering childhood, teens, adulthood and middle age.

It's a punchy 90-minute play that feels a little like a whodunnit, with the suspects being parents, culture, class and politics.

While it is set in France, there is a lot that resonates about the struggles the poor face here in the UK and how the most minor political decision can make a huge difference - for good or bad.

It's also an interesting exploration of toxic masculinity and how that gets passed down and reinforced by society. It shows the devasting impact it has on the father and his prospects - toeing the line at school is seen as a feminine or homosexual trait.

But this isn't a simple story of an emotionally abusive father who can't hide his shame about his son's lack of 'masculine' traits. There are family treats, the Titanic video and singalongs to Celine Dion in the car.

The father also experiences a good dose of misfortunate, which makes life even more difficult despite his best efforts.

Kesting's delivery is slow and considered, reserving bursts for youthful energy. It makes for an effective contrast in mood and tone, although the pace does drag a little in a couple of places. He doesn't always play to the audience, so at times it feels voyeuristic.

At one point, Kesting disappears from view if you are sitting to the left of the stage, but it isn't for very long  He spends a bit of time sitting on a bed which is stage left, but I'm not sure if that affects the view if you are in seats that are to the far right.

Who Killed My Father presents some interesting ideas about the agency poor people have over their own lives, and the way society both helps and hinders. It's subtle but powerful, and I'm giving it ⭐️⭐️⭐️⭐️

Who Killed My Father, Young Vic

Running time: 90 minutes without an interval.

Booking until 24 September; visit the Young Vic website for more details and tickets.

Silence is based on a non-fiction book by journalist Kavita Puri who interviewed people who lived through the partition of India in 1947 and subsequently settled in the UK. 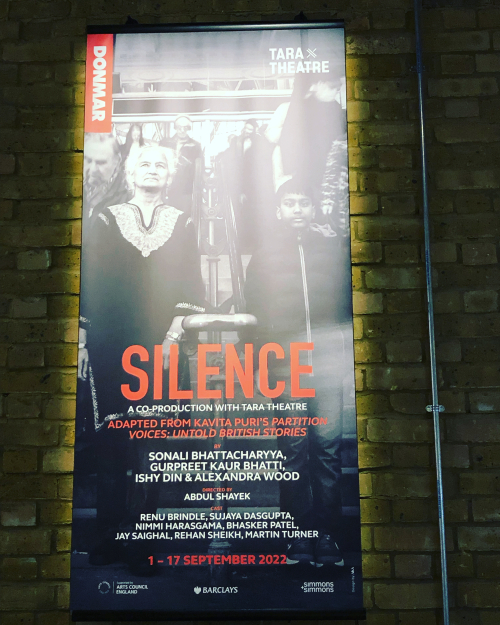 The play is co-authored by Sonali Bhattacharyya, Gurpreet Kaur Bhatti, Ishy Din and Alexandra Wood and is structured as a series of individual stories joined loosely by the thread of a journalist trying to coax her elderly father into talking about his own experiences.

Partition is not an event in history I know much about, which is what immediately drew me to the play, and for that, it is a good introduction. These are real experiences of trauma from a country suddenly divided on religious grounds. Friends turned enemies overnight because of a line drawn on a map and the atrocities and violence that result when people are othered.

The staging is simple, with large panels of cloth hanging towards the back of the stage, onto which there are projections. These can be turned at different angles.

A piece of string is used to denote how the country was carved up with religious groups designated to certain areas. And chalk lines depict train tracks now dissected by the 'border'.

However, the staging is such that it pushes the actors towards the front of the stage, and the production doesn't make the most of the Donmar's thrust with much of the performance played forwards, neglecting those sitting to the sides.