Review: Who You Are And What You Do, Bread and Roses Theatre - Making sense of spinning wheels

Who You Are And What You Do starts with spinning a wheel to determine the order of the story - it's a quirky idea and has been used in different guises before. 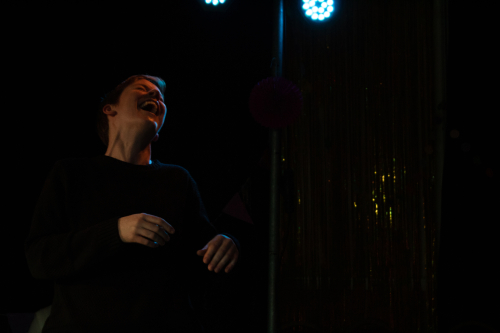 Who You Are And What You Do, Bread and Roses Theatre. Photo: Rachel Guest

The wheel has six pieces of paper with words such as "dignity" and "more than this", and once each is chosen (the audience does the spinning), it is pegged to a washing line across the performance space. It has the effect of bunting.

There is glitter on the floor and boxes with various random items, and a Christmas Tree in the corner. The audience is seated around the edge of the space, and it feels like you are attending a children's party. The play kicks off with two clowns larking about doing clown stuff.

Are they part of the narrative thread or just a scene-setter? There is a clown later entertaining a lonely boy on his birthday (played by a man wearing a dinosaur costume). That story thread contains a workaholic father who is also having an affair.

There is another thread with a woman who has lost the ability to laugh and turns to an ex-child star for lessons. In another, a woman is writing her dating profile, and in another, a couple live in a perpetual state of preparing for Christmas - the husband has dementia.

Continue reading "Review: Who You Are And What You Do, Bread and Roses Theatre - Making sense of spinning wheels" »

You know those times you are watching a play utterly transfixed by what is happening on stage? Yep, well, that's how I felt watching  Ruth Wilson in The Human Voice. 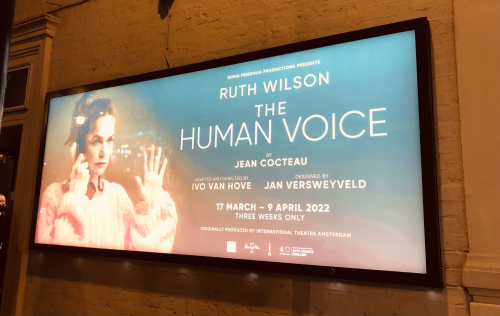 The signs were good. She's a fabulous actress, and she's partnered with director Ivo Van Hove before - in Hedda Gabler at the National Theatre, which earned five stars from me.

An adaptation by Van Hove of Jean Cocteau's challenging play, The Human Voice is not just a monologue; it's one side of a telephone conversation. In the wrong hands, it could be awful.

The conversation is between a woman (Wilson) and, as we learn, her lover. They have been together for five years, but he is leaving her and marrying another woman the following day, so this will be their last conversation.

There is nothing obvious or affected in Ruth Wilson's performance. We watch her through a large window as if observing her apartment from a neighbouring building. She occasionally walks out of view while talking, and there is something voyeuristic about the whole thing, a feeling which heightened by how oblivious she is to being viewed - or overheard.

Review: Under the Radar, Old Red Lion - mismatched and odd

In Jonathan Crewe's play Under the Radar, journalist Lee Stilling  (Eleanor Hill) is profiling inventor Martin Christensen (Nicholas Anscombe), who has built his own submarine. She is accompanying him on his two-day maiden voyage, and it will be her big scoop. 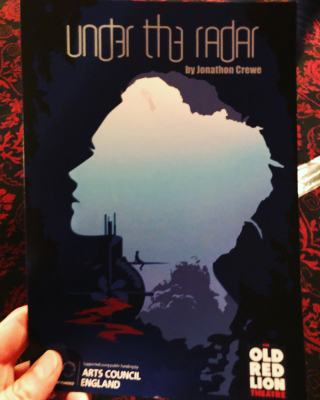 The first act starts ostensibly as an interview. However, the notebook and pen are quickly forgotten as the two drink their way through a bottle of some home-distilled liquor of Martin's. It turns out both Lee and Martin have daddy issues, and both want to prove themselves.

But the signs are fairly obvious that this isn't going to be about two strangers alone together comparing lives and working out their problems. There are Chekhov's guns all over the place, such as Martin's expressed desire for power and how he likes being on his submarine because he can make the rules. He stops drinking while continuing to top up Lee's glass and questions her about her looks and how it's impacted her career.

As the conversation about male-female relationships develops, more of Martin's gender bias is exposed, eventually turning into a darker, violent misogyny.

This leads to an utterly bizarre supernatural third act which, visually at least, had me thinking about Beckett's Happy Day. Is this the 'darkly comic' bit as described in the play notes?

When you've had acts of male violence towards a woman described in graphic detail in a previous scene, it's hard to find anything funny.

The acceleration of events between acts 2 and 3 is so rapid that Lee's response is glossed over. Is that what necessitated the odd final act: to give her a voice?

Reflecting on the submarine setting, it turns out to be merely a device to get the two alone and isolated with no phone signal. Other than brief references at the start about the right terms to use (a submarine is a boat, not a ship), the submarine seems to be on autopilot for the entire trip.

It is similar to Lee's role as a journalist; aside from a notebook, she seems ill-equipped to do an interview - no laptop or dictaphone to record the conversation. The fact that she turned up for an overnight work trip with just a handbag also felt strange.

Such detail perhaps wouldn't matter if the play was less disjointed and knew what it wanted to be. Is it a subtle exploration of unconscious bias or exposure of toxic masculinity and male violence? Is it a dark comedy, a thriller or a horror?

There is a lot to say about gender bias and misogyny, but in Under The Radar, it gets submerged.

Written and directed by Jonathan Crewe

Running time: 90 minutes with an interval

The Collaboration, Young Vic - The play that had me on my feet