Review: The Collaboration, Young Vic - Jeremy Pope and Paul Bettany had me on my feet

Anthony McCarten's new play The Collaboration at the Young Vic kicks off as you arrive in the auditorium with an 80s DJ set. It's toe-tapping, hip and creates a party, edgy, youthful yet nostalgic atmosphere. 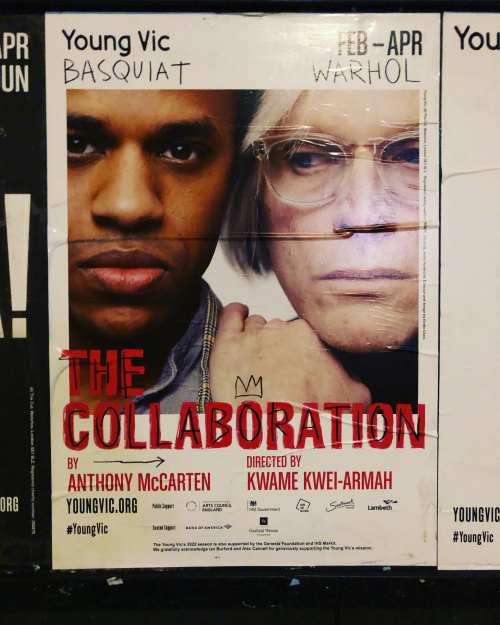 Official poster for The Collaboration at the Young Vic, Feb 2022

Contrast this with the first scene in which we find Andy Warhol (Paul Bettany) being persuaded by his manager Bruno (Alec Newman) to work on a collaboration with young artist Jean-Michel Basquiat (Jeremy Pope).

Bettany's Warhol is buttoned up, stiff, contained, tidy and hates mess. His appeal in the art world isn't what it once was.

In the next scene, we meet Basquiat, whose star is firmly in the ascendant. He is having a similar conversation with Bruno, whom he also manages, and we see someone who is more fluid and loose in their body language, inquisitive and prowling. Someone who doesn't care about mess.

But this isn't just about physical differences; it's a play about different minds, different approaches to art and different lives.

The first half is a verbal sparring match, the two artists having reluctantly agreed to work together. They clash on the purpose of art, what it's for and whether it can heal.

Warhol's art is planned, slow, particular and calculated its value, ironically, dismissed as nothing. Basquiat's art is spontaneous, rooted in emotion. It is about expression and saying something.

Continue reading "Review: The Collaboration, Young Vic - Jeremy Pope and Paul Bettany had me on my feet" »

Henry V opens with a burst of energy at a nightclub with a worse for wear party prince. It's a scene lifted from Henry IV part 2 and is an important reminder of Henry V's past and subsequent transformation into a serious king.

It is a great scene-setter for this modern-dress production and a performance of Henry that leaves the lines blurred between heroic and ruthless leader. 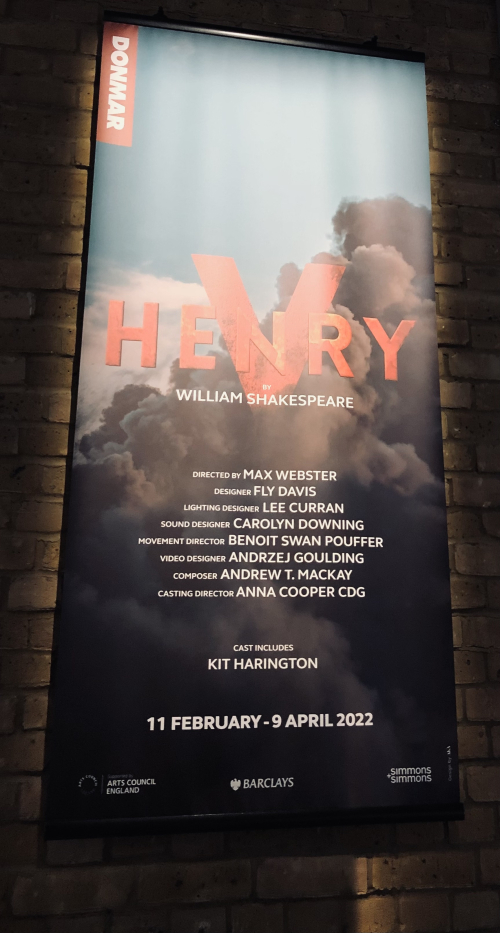 One of the first things we see the new king decide is whether to go to war with France. His claim to the French throne is explained by a Bishop, with the help of a family tree projected on the stage's back wall.

There is a satirical note in the way the hereditary links are drawn. However, it is Kit Harington's controlled switch in tone when addressing the French ambassador after being insulted, which is the first glimpse of Henry's character as king.

He is angry but sparing, there is no chewing the scenery, and yet it magnifies his power and presence even when he isn't on stage.

His divine status is emphasised subtly in choral and operatic pieces sung by members of the cast. The music serves as a reminder of the role the church plays in driving Henry to war with France as well as lending a tragic tone to the story.

Review: The Forest, Hampstead Theatre - marriage, masks and our darker side

Florian Zeller's new play The Forest is like looking at broken mirror pieces, it is you, yet the angle is a little bit different in each piece. It follows Pierre, a successful surgeon who's married and the father of a grown-up daughter, as he juggles his professional and family life with having a mistress. The first inkling you get that he is duplicitous is his reaction to the news that his daughter has caught her partner cheating. He is sympathetic but doesn't think it's that big of a deal.

It's a stark contrast to what unfolds when his own affair threatens to be exposed. Or at least what he fantasises.

I confess that there is a moment in the play when the train jumps tracks, and it nearly left me behind. If you've seen The Father, you know that Zeller can play with timelines, and he does something similar here with the same scenes played out with subtle differences.

Continue reading "Review: The Forest, Hampstead Theatre - marriage, masks and our darker side" »