Sunday theatre question: Which is your favourite play based on real events?

Sometimes the truth is stranger than fiction and that's how I preambled my review of The Great Wave at the National Theatre back in 2018. It was based on real events in the 1970s and 1980s when North Korean agents abducted ordinary people from Japanese beaches in order to steal their identities or learn the Japanese language and culture.

The play follows two sisters one who has been abducted and the other left behind living with her sister's sudden disappearance.  It's a nail-biting, emotional roller coaster of a play that brought to life events I had no knowledge of.

Which is your favourite play based on real events?

The Great Wave is one of several plays based on real events I've really enjoyed over the years, here are some other notable mentions:

Enron, Noel Coward Theatre - Took a very dry subject and made it interesting and entertaining - bonus points for velociraptors and light sabres.

Continue reading "Sunday theatre question: Which is your favourite play based on real events?" »

The 'Chekhov's gun' in Lolita Chakrabati's Hymn is £10,000 in savings. When it gets mentioned early on, the warning light started flashing in my mind. It belongs to Benny (Danny Sapani), hard-earned and put by bit by bit over the years.  But it is a victim of the story rather than the driver of the narrative.

Benny has recently found out his father is - or was - a local businessman and turns up at his funeral, where he meets his half-brother Gil (Adrian Lester).

The narrative quickly strides forward to when a strong bond has formed; they share a love of music and, in particular, the music of their youth.

There is a celebratory feel to their friendship - helped by some serious dancing and cool 80s beats - as if making up for the decades of missed shared experiences.

But Benny and Gil's relationship contrasts with that between Gil and their father.

Two eulogies bookend the play. The first is revealed to be not quite truthful in how it represents a relationship while the other we'll never know if it was or not. And that made it a slightly problematic device for me.

Sunday theatre questions: Which play have you seen the most?

Theatre-land is a mixture of new plays and revivals, but there are certain classics which regularly get staged - which have you seen the most? Is there a particular reason why you've seen one play more than any others? The hands-down winner for me is Hamlet. I think I've seen 17 or more different productions, but I confess it was less than literary reasons that got me hooked initially.

Yes, Hamlet was one of the set texts in my final year at Uni but that year also saw the release of a film version of Hamlet starring Mel Gibson.

He was one of my teen crushes so; naturally, I ran to the cinema to see it and then went back to see it again... and again.

I have no idea if it was well done - I wasn't really watching it for the play - but it helped me get really familiar with the key speeches. Handy when exam time came around.

The first stage production of Hamlet I saw was on a student trip to Theatr Clwyd. It was memorable for several reasons no least because one of the actor's costumes caught fire  - it was all fine, quickly stamped out by another actor without even a pause in their speech.

But it wasn't until I saw it again years later - in 2008 - with David Tennant as Hamlet that it really sparked my interest/obsession. The speeches were still familiar, and the production just opened up the play in different ways.

Continue reading "Sunday theatre questions: Which play have you seen the most?" »

I don't want to turn this lockdown theatre walks series into Ben Whishaw stories, but I do have a Ben Whishaw story connected to Hampstead Theatre, but I'll come onto that. 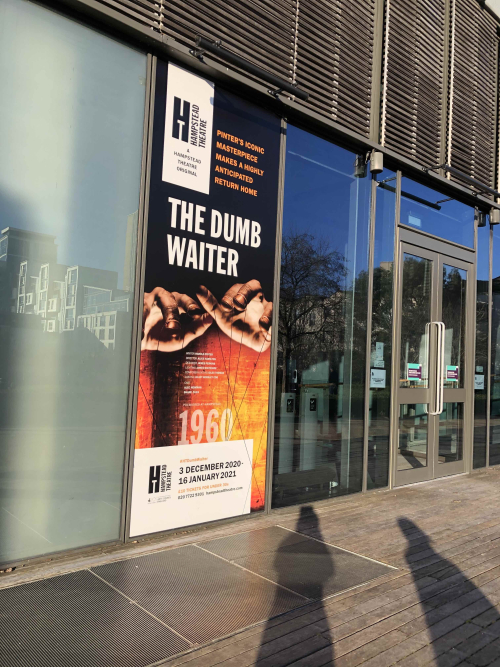 Normally I'd get the tube to Hampstead as the Santander Cycle docks don't stretch that far but having the time, I cycled into town and met up with fellow blogger Maryam (Cultural Capital) for a socially distanced walk to the theatre.

At the end of last year, we had tickets to see The Dumb Waiter, but then theatres had to close, again, so it was bittersweet seeing the posters.

I think my relationship with Hampstead properly started with Propeller Theatre and two particular productions: Richard III and A Comedy of Errors.

Richard Clothier's portrayal of Richard III is still one of my favourites and Propeller's 'Errors' was the first time a Shakespeare comedy had really made me laugh so it was a bit of a revelation.

Another play that really 'stands out' is The Judas Kiss for reasons of impressive velvet backdrop which proved to be a teeny trip hazard and, well, if you've seen it you'll know the 'other' reason.

This week's Sunday Theatre question is about girl-power on stage - what is your favourite play or production with an all-female cast?  Theatre's gender balance still has a way to go, but it feels like it has improved in recent years. Do you think? 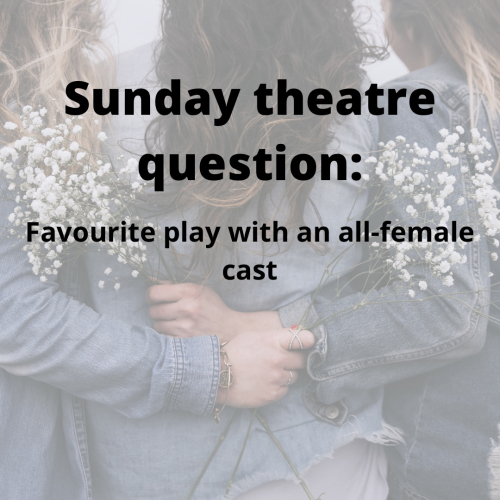 My choice for this makes a thing of having an all-female cast. Emilia, which I saw at the Vaudeville Theatre in 2019 (review here) is the story of Emilia Lanier, the first feminist poet and a possible inspiration for Shakespeare.

And while it is a story with feminism at its heart, having an all-female cast allowed plenty of humourous digs at the fact that women weren't allowed to perform on the stage in Shakespeare's time.

It was brilliantly done and was such a joyous production; I loved it. So what is your choice and why?

Looking for inspiration? Here are some other all-female cast productions that spring to mind:

Queens of Sheba, Battersea Art Centre - Saw this at the Edinburgh Fringe then again when it transferred the Battersea Arts Centre. It's one of those plays that doesn't shy away from looking at the difficult subjects - sexism and racism - but also feels like a celebration and a rally - a call to arms. I loved it very much.

Headed into town for my weekend lockdown exercise and visited the Soho Theatre - we go back a long way, to pre-blog days and pre-fame days for two notable names. 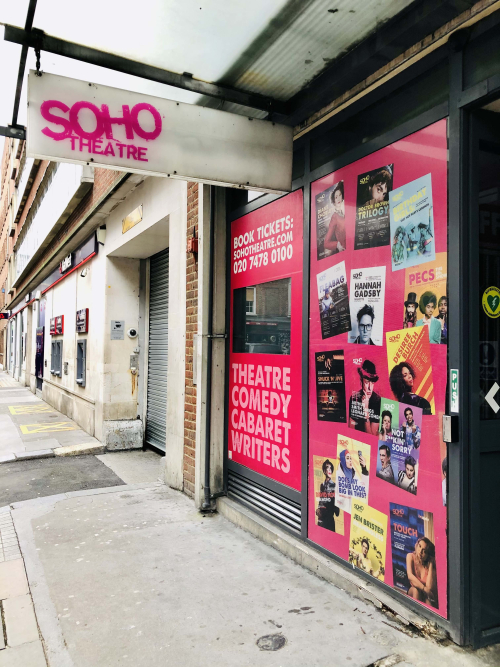 It was at the Soho Theatre I first saw Ben Whishaw on stage. He'd just come to my notice in the film Perfume and when I saw that he was doing a play I bought a ticket out of curiosity to see what he'd be like on stage.

The play was Leaves of Glass, by Philip Ridley and he co-starred with Maxine Peake.

I actually saw him in person the week before, passed him on the stairs at the theatre as I was heading to see some comedy (Soho has more than one performance space).

Whenever I'm walking up those stairs with @polyg I point out the spot where we passed - it never wears thin. For me, anyway.  Poly is very good at humouring me.

Seeing Leaves of Glass cemented my opinion of Mr W, and I've tried to see everything he's done on stage and screen ever since.

But this wasn't the only 'early in their career' spot at the Soho Theatre.