Review: The Comeback, Noel Coward Theatre - is this the comedy we need?

I love a serious play, something thought-provoking and challenging but right now, with everything that is going on, I just want a laugh. I want frothy fun that is diverting. Did behind-the-scenes farce The Comeback at the Noel Coward Theatre fit the bill? 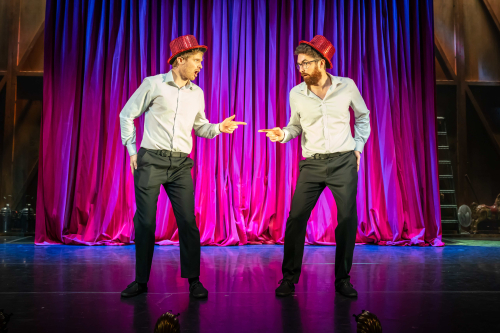 Written by and starring Ben Ashenden and Alex Owen, The Comeback is a bit like Michael Frayn's Noises Off but instead of seeing the on and off stage shenanigans during a play, it is set on a comedy tour.

The 'stars' of the tour are an ageing comedy duo (Morecombe and Wise-esq) trying to stage a comeback. Ben and Alex are the warm-up act and hoping the tour will catapult them into the big time.

When they spot the name of a Hollywood director on the list of ticket holders the need to impress suddenly becomes even more important.

Ashenden and Owen's humour is gentle, fun and cleverly disarming. You wonder where they are going with a skit or a gag but where it lands is often a surprise - and all the funnier for it.

Continue reading "Review: The Comeback, Noel Coward Theatre - is this the comedy we need?" »