The last time Jamie Lloyd directed James McAvoy in a play, he had him riding around the stage on a unicycle in nothing but his pants. 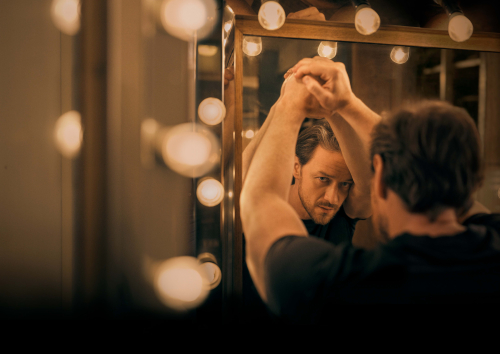 In Cyrano de Bergerac, their latest collaboration, the trousers stay on (sorry) instead it is deep, raw emotional pain which is laid bare for all to see.

It is a tragic tale of unrequited love. Cyrano has gained acclaim and respect as a skilled soldier but is also beloved as a clever wordsmith baiting the authorities with his biting wit and writing beautiful romantic verse with equal aplomb.

Convinced that the woman he loves - Roxane (Anita-Joy Uwajeh) - will never see past his looks he accelerates his own heartache by helping her and her lover Christian (Eben Figueiredo), a good looking cadet.

Lloyd's modus operandi is to take a fresh approach to classic plays, adding a contemporary spin while drawing out the deeper emotions and nuances and Cyrano is no exception.

The stage is plain and simple with just a mirror or sometimes a couple of chairs.

Cyrano is reborn as a performance poet. While the actors all have head mics, there are two traditional microphones - a reminder of the 'performance', one of several nods to it in the production.