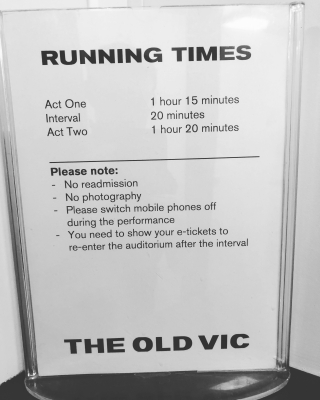 An Octoroon was the first play of Branden Jacobs-Jenkins I saw and it blew me away. He has such an imaginative and bold approach to difficult themes I rushed to get tickets to another of his plays, Gloria, at Hampstead Theatre. Again I wasn't disappointed.

So I had great expectations as I walked into the Donmar to see Appropriate which is receiving its UK debut.

Set in a crumbling plantation house in Arkansas, the Lafayette family has gathered to sort out their late father's belongings and sell the estate.

They all bring emotional baggage and scars of past events.

Older sister Toni (Monica Dolan) is recently divorced, has a teenage son who has been in trouble for dealing drugs, was close to her Dad and executor (and chief visitor) of her father as he became a recluse and required day to day care.

Review: Juliet Stevenson in The Doctor, Almeida - Principles, prejudices and listening to your PR

Robert Icke has certainly made his mark while associate director at the Almeida. Highs include Hamlet with Andrew Scott and Oresteia with Lia Williams although there was also Mr Burns. 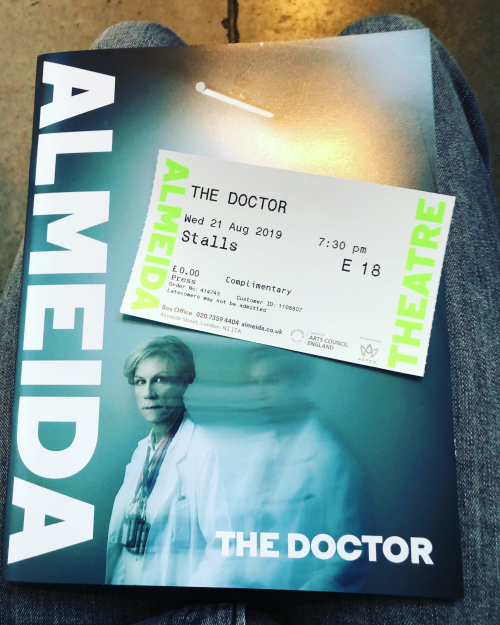 He leaves the Almeida with a challenging piece, his adaptation of the early 20th Century play Professor Bernhardi by Arthur Schnitzler.

Set in a modern hospital, the protagonist is the formidable Ruth Wolff (Juliet Stevenson) dubbed 'BB' (big bad) by her team when she isn't around.

She is an astute and skilled doctor, a leader in Alzheimer's research, focused, inflexible and forthright in her views to the point of rudeness.

'Leaders should lead' is her mantra but playing the game - the politics of management - isn't her strong suit and gets her into big trouble.

When a 14-year-old girl is admitted with sepsis from a botched home abortion, Wolff refuses to allow a Catholic priest to give her last rights because the girl hasn't given her express wish for the priest to be there and she doesn't want her becoming distressed.

Wolff wants her to have a peaceful death but that message gets lost in the row that ensues and she comes across as obstinate.

It is easy to see the escalating maelstrom that could be prevented by a simple apology but Icke throws so much petrol on the bonfire it's obvious she never stands a chance.

Petrol on the bonfire

Because Wolffe is Jewish, albeit non-practising, she is seen as bigoted.

Because the 14-year-old girl had an abortion, albeit self-administered, the pro-life campaigners see Wolff as pro-abortion.

Continue reading "Review: Juliet Stevenson in The Doctor, Almeida - Principles, prejudices and listening to your PR " »

Review: The Night of The Iguana, Noel Coward Theatre, modern women and a minister on the edge

The women of Tennessee Williams' play The Night of the Iguana were in many senses ahead of their time. 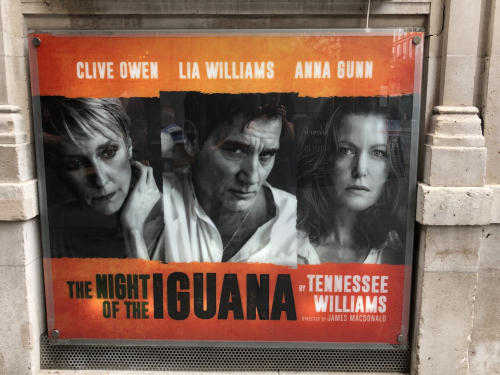 Based on Williams' 1948 short story and set in 1940s Mexico, the play's central character Rev Lawrence Shannon (Clive Owen) is enveloped in a scandal. On an official break from his ministerial duties after preaching atheistic sermons, he's taken work as a tour guide but after sleeping with an underage girl on his tour, the group has turned against him.

He has retreated to a hammock at the budget hotel run by his friends Maxine (Anna Gunn) and Fred although the latter has recently died.

The hotel is perched on a cliff - a brilliantly imposing set by Rae Smith - which puts the protagonist literally and figuratively on the edge.

Here while facing off the ferocious and unrelenting tour leader Miss Fellowes (an unrecognisable Finty Williams) and the sexual advances of Maxine he finds a connection with the whispy spinster Hannah Jelkes (Lia Williams) who is travelling with her aged grandfather Nonno (Julian Glover).

Hannah is devoted to Nonno, has an inner strength and sensibility which both calms and inspires Shannon who is prone to nervous attacks and depression.

Continue reading "Review: The Night of The Iguana, Noel Coward Theatre, modern women and a minister on the edge" » 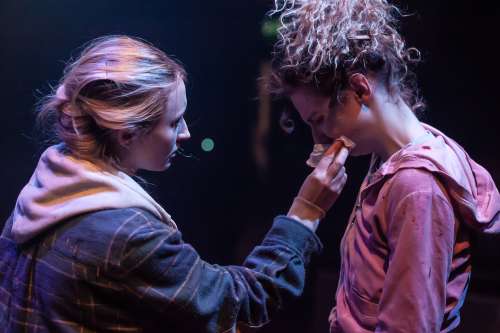 What could be worse than being killed? For Joanne, the victim of child sex grooming gang you don't want to imagine but delivered in such a throwaway manner its potency is subtle.

Jane Upton's play, All The Little Lights was inspired by news headlines about the Rochdale child sex abuse ring, not an easy or comfortable topic to broach.

It is delicately handled, the story told through the eyes of Joanne (Lucy Mabbitt), her friend Lisa (Erin Mullen) and young newcomer Amy (Emily Fairn).

Is saying 'actually', the same as saying 'no'? This is a question posed very early on in Anna Ziegler's play about two students whose drunken date night ends up in a rape accusation. 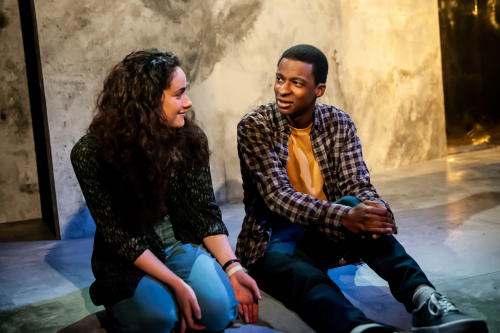 Yasmin Paige and Simon Manyonda in Actually at Trafalgar Studios 2

It is the first term at a prestigious university. A time for making new friends, enjoying the freedom of being away from home, finding out who you are and where you fit in.

Amber (Yasmin Paige) is Jewish at turns shy, awkward, talkative and forward. Tom (Simon Manyonda) is black, good looking and confident, occasionally to the point of being 'dickish', something he acknowledges.

When we first meet them they are on the fateful night out. It appears from the nature of the conversation that they are in the early stages of getting to know each other.

The narrative jumps back and forth piecing together the events leading up to the alleged rape and the college hearing that results from the accusation.

Why I won't be renewing my London theatre friends memberships

For a long time, I've paid an annual fee to be part of various London theatres 'friends' schemes but over the past 12 months, I've been assessing their value.

Ultimately they are a way for theatres to raise extra money but I already buy a lot of tickets so the perks for paying extra need to be worth it.

Early access to tickets is pretty much the USP for theatre memberships and the reason I joined so many schemes. I like good seats, I like to be as close to the stage as possible.

I guess the fear of missing out has kept me renewing the memberships over the years.

Only the Barbican offers discounts on tickets and given that membership also gives you discounted cinemas tickets and free access to exhibitions, it's the only scheme which can pay for itself.

In recent years, theatres have been making a concerted effort to be more accessible to a wider variety of people. Hallelujah to that, it is really important.

But sometimes it has eroded the perks of friends memberships.

Harriet Madeley's The Colours is a verbatim play based on interviews with people with life-limiting illnesses and those working in palliative care. While researching the play, Madeley herself was diagnosed with a potentially life-limiting illness but rather than fraught emotional meaning-of-life drama this a piece of quiet ordinariness - which is its secret power.

It starts in darkness projecting the audience by way of a soundscape to the seaside but what it is, in reality, is a therapy session at a Welsh hospice.

Sand is a physical motif throughout. It represents the shoreline, the beach from patients' therapy sessions but also the flowing sands of time as seen from the bucket at the back of the stage.

We are introduced to two cancer patients and another with motor neurone disease, getting snatches of their conversations with family, doctors and their thoughts through diagnosis, initial treatments and then palliative care.

The tone, for want of a better comparison, is like animation series Creature Comforts which is voiced by ordinary people.

Review: Tree, Young Vic - spectacle and atmosphere but I wanted more digging around the themes

When it opened at the Manchester International Festival last month, Idris Elba and Kwame Kwei-Armah's highly anticipated immersive production Tree was marred in controversy over authorship credits - to which both have responded. 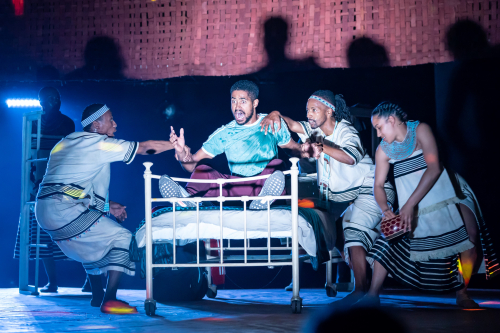 Cast members in Tree at Manchester International Festival. At the Young Vic from 29 July to 24 August. Photo: Marc Brenner.

It's now in residence at the Young Vic and interest remains untarnished if the long queue of people waiting for the doors to open is anything to go by.

Tree tells the story of London-born Kaelo (Alfred Enoch) and his journey to scatter his white mother's ashes in her South Africa homeland.

There he meets his white grandmother (Sinead Cusack) and black half-sister (Joan Iyiola) for the first time and sets out to discover what happened to his father.

Dance with the cast

The play opens with a club DJ playing music from Elba's own album and the audience is encouraged to dance on the low circular stage among the cast.

I did see one couple getting a selfie with Alfred Enoch - not sure if that is in keeping with the character of the piece or not.