Review: Grace rather than gasps in Pirates of The Carabina's: Relentless Unstoppable Human Machine, Roundhouse

...it is in many ways an entertaining show but it is also a show that feels more about grace than gasps and I missed those nerve-jangling, pulse-raising moments you normally get with acrobatics. 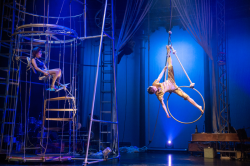 Pirates of the Carabina are more than acrobats they are also clowns, singers and musicians.

So while one of them is hanging spectacularly by their feet from a hoop that is being spun above the stage another is singing or playing guitar in the onstage band.

As well as the band the lights sometimes fall on a group of singers up in the balcony.

The rhythm and tone of the music and singing introduce the pace and style of each sequence of acrobatics and clowning.

There are graceful pieces, that are almost balletic when combined with the music where artists are swinging in circles from ropes or bolts of fabric - or hoops - while creating amazing shapes or performing incredible holds.

More uptempo music denotes a faster pace to the acrobatics or some clowning around.

And there is some great clowning around with chase sequences on roller skates and a 'novice' attempting a wobbly walk along a tightrope - I'm sure it is more difficult to look bad when you are actually really good.

Writer Guleraana Mir talks about her new play Coconut, in which she wants to show that there is far more to British Asian women than is commonly portrayed. What is Coconut about and what inspired you to write it?

The term Coconut refers to someone who is brown on the outside and white on the inside. It is mostly used as a derogatory term, but that is how the protagonist Rumi, a British Pakistani woman self-identifies.

The play charts the course of the relationship between Rumi and Simon, a white man who converts to Islam to marry her.

It’s a story of two people trying to navigate what being in an intercultural and interracial marriage looks like when they’re not even sure where they fit in society individually.

Back in 2015 when I was asked to write the original 15-minute one-woman piece for Ladylogue! (an evening of one-woman shorts) I was given the extra caveat to consider what I wasn’t writing about: My heritage.

Of course, I wanted to meet the challenge but I was also inspired by the fact that I’ve never seen a character like Rumi on stage before.

We don’t have much range in our British Asian representation on stage, or screen. It’s all Bollywood-inspired wedding-based drama, colonialism, terrorists or doctors.

Some of us don’t fit into any of those boxes as people, so why should our characters?

It’s your first full-length production, what has the journey been like?

Long. No one ever tells you that theatre takes time, especially if you’re producing.

The Thelmas are co-producing Coconut with Ovalhouse and we’ve known for over a year that this production would happen, it’s just been a case of getting everything in place so that we’re ready to pack the theatre with an exciting and diverse audience once we open.

Before that we spent over a year developing the play with support from Park Theatre’s Script Accelerator and New Diorama’s BAMER program, so a lot of work has gone into this.

I’m really excited to show off the play in its final form as it’s undergone some serious rewrites since our last industry reading.

How involved are you in the rehearsal process?

Not very. Since the last rewrite, I’m comfortable with where the script is at, and I trust the creative team with it.

If they need clarification on something I know they will reach out, otherwise director Madelaine [Moore] has a strong vision for the piece and I trust her completely.

In fact, I’m pretty sure that once it’s all put together it’s going to look better than I could have ever imagined.

What I am doing is admin - helping organize the pick-up and drop-off of set, source props etc. all much less glamorous than sitting in a rehearsal room chewing the end of a pen, but ultimately much more useful.

Coconut is a described as ‘an irreverent, dark comedy', what role does humour play in the telling of this story?

Humour is essential otherwise when the play takes a dark turn the audience would just feel battered.

Most of the humour comes from the character of Rumi and her outlook on life.

She’s the kind of person that approaches everything lightheartedly with a smile and a one-liner.

In the play humour is what lulls Rumi (and the audience) into a false sense of security, as she’s constantly brushing everything off with a joke and so doesn’t realise what is going on until it’s too late.

* Mark Bonnar and Jane Horrocks have been cast in Instructions for Correct Assembly at the Royal Court which opens for preview on April 7. 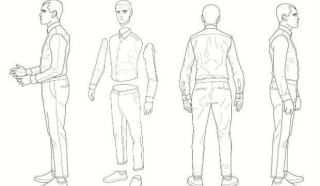 * Samuel West joins the previously announced Romola Garai in Ella Hickson's The Writer, Almeida, which opens for preview on April 16.

* Not only is the Donmar staging a new adaptation of The Prime of Miss Jean Brodie, directed by Polly Findlay, but Lia Williams and Angus Wright are starring. Be lovely to see those two on stage together again.

* Stan-fav Jade Anouka has been cast in The Phlebotamist, the debut play by Ella Road at Hampstead Theatre Downstairs.

* It's bye bye to the Lyric Hammersmith for a little while (June to October) as it undergoes a refurbishment.

* Orlando Bloom has been cast in Killer Joe at Trafalgar Studios which opens for previews on May 18. I admit my interest in seeing this is more out of curiosity rather than being a fan.

* Another Stan-fav, Jonjo O’Neill, has been cast in The Prudes at the Royal Court Theatre which opens for preview on April 18.

There's a bit of a Hamlet theme to the spots in March. Game of Thrones's Joe Dempsie was watching the RSC's Hamlet at Hackney Empire and then he 'stalked' @PolyG and I nearly all the way home on the tube.

Exeunt magazine (@theatremagazine) asked its reviewers what their (irrational) dislikes at the theatre were and compiled them into this great list. There are many I agree with (ovations, actors on stage as the audience arrive, real food...) but I have my own addition: Snotty noses.

Well, not so much snotty noses, there's (s)not much you can do about that, but the fact that actors never have a hanky or tissue.

Instead, they wipe their nose on their hand or sleeve...or on the shoulder of the fellow actor, their character is hugging, if they are lucky.

It's what seven-year-olds do. It's revolting.

Only once have I seen an actor on stage with a hanky. Zoe Wanamaker obviously had a cold during when I saw her in The Rose Tattoo at the National Theatre but she made blowing her nose part of the performance.

An actor blowing their nose isn't going to break some magical spell, in fact watching them wipe snot on their sleeve or hand breaks the spell, grown-ups (mostly) don't do that.

They must know they are going to get snotty why not be like Zoe, make it part of the performance?

Photo by William Brawley on Flickr and used under a creative commons license.

When an actor holds your hand or leads you into the performance space it is the encounter that is foremost in your mind and what is going on around you rather than the nuances of character, play and plot.

REVIEW: It's a cold, wet, Easter Friday and I'm in a church hall in Pimlico, sat in a circle on a plastic chair.

The strip lights are bright, the atmosphere friendly, the scouting posters on the walls betray the halls usual users - this isn't your standard theatre experience. It feels a little like a support group, a support group for theatre addicts - later an actor will stand next to me and hold my hand - but that's during the play, beforehand they mingle and chat.

They aren't yet in character like at the Donmar's The Resistible Rise of Arturo Ui last year. Neither are they in costume.

I'm asked how I heard about the performance and whether I'd seen anything by Factory Theatre before - the company behind this production of Macbeth.

The atmosphere is relaxed, warm, full of expectation but with an underlying layer of nerves from the actors and perhaps the audience too - some are due to take part.

Audience participation is voluntary. Kind of. You can volunteer to 'play' a witch and are allocated a line or two together with the appropriate cue.

You can also join in with certain choruses of the witches. Or you can observe unless you find yourself being led gently by the hand to stand with the actors and other members of the audience during particular scenes.

But this is all to come. First us theatre addicts get an intro by our support group leader, RSC thesp and Factory artistic director Alex Hassell.

This, we are told, is the first performance of what will hopefully be an evolving production with the cast changing as often as the venues. Casting is colour, gender, age and disability blind.

The actors have a prompt, things might not go smoothly, we can pop out to the loo - the only real nod to convention is that phones should be switched off.

In a similar vein to recent productions where the lead actor is determined on the night (coin toss for Mary Stuart and burning matches for the RSC's Doctor Faustus) a game of rock, paper, scissors decides who will play Macbeth.

The two actors up for the part choose a member of the audience to play for them. We get a female Macbeth - what I was hoping for.

And then the play begins and we are in theatre-land with the actors wearing tights on their heads and silently moving around, shaping the performance space in the middle of the circle by either sitting, crouching, laying or standing.