Amadeus (National Theatre) or crying more the second time around 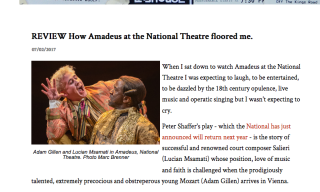 Poly urged me to see Amadeus last year after I missed seeing it with her and I was so glad she did, I gave it five stars.

So when it was announced it was returning this year, I had to see it again. Would it live up to the very fond memories I had?

What I liked so much about Amadeus the first time wasn't just the spectacle - the costumes, live music, beautiful snippets of opera, the craziness and craft of the production - but how it packed an unexpected emotional punch.

This time I knew what was coming, and that made it so much worse. Happier scenes took on a bitter taste. I started seeing shadows where before I'd seen light.

There was a poignancy to the music that hadn't been to perceptible to my ears first time around.

It becomes a tragedy in slow motion and one I was powerless to stop. When you don't know the story, you can hope for a different outcome, perhaps even expect it.