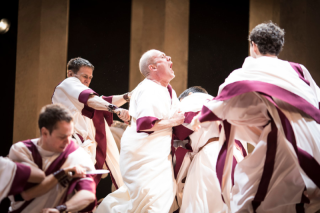 Bloody Julius Caesar. Not only does he gets ideas above his station and meet with a messy end but his murderers decide to wear his blood like a face mask, as if they weren't smeared and splattered enough.

However, it wasn't the sight of the red stuff in this RSC production that earned a collective gasp from the audience it was another death, bloodless but with a realistic snapping sound effect that had more than a few hands over mouths.

Who met with this end? Well that was, I suspect, a big contributing factor in the response but I won't spoil it.

Julius Caesar is a brutal play not just in the violence but in the questions of loyalty and justice.

The writing is on the wall in the opening scene where a celebratory mob are criticised for their fickleness having changed allegiance to Julius Caesar when he is victorious.

Brutus (Alex Waldmann) has the people behind him after his rational speech explaining the reasons for the murder but it is Mark Antony (James Corrigan) who really knows how to work the crowd.

Here's a video interview of him talking about the character. Counting the days.

Julius Caesar is at the Bridge Theatre from January 20 to April 15. 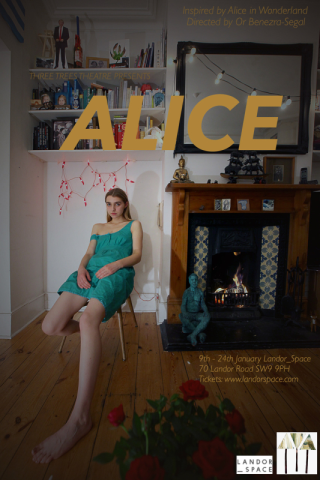 Jonna Blode Hanno, Laura Thomasina Haynes and Mollie Macpherson from Three Trees Theatre talk about the inspiration and process behind their new play Alice which opens at the Landor Space in Clapham on January 9.

How would you describe the piece?
It's a devised piece inspired by Alice in Wonderland, focusing on Alice's journey into the confusing and somewhat absurd world of adulthood. The piece deals with controversial rumours about Lewis Carroll's relationship with Alice Liddell, for whom he wrote the book, but set in our time of #metoo and countless testaments of sexual abuse.

Why Alice in Wonderland?
Alice in Wonderland is such an iconic story, but after reading it we were most fascinated by the darkness in it, and Lewis Carroll's unique perspective on the world of adulthood. When the Weinstein scandal came out and #metoo started shaking the world we felt we had to join the discussion around responsibility and power in our own industry as so much of the controversy around Lewis Carroll is still so relevant.

Tell us about the process?
We cast everyone as different characters from the book but then examined what that creature could symbolise in our world today instead of having a literal portrayal. For example, we do not have the White Rabbit sat at Lewis Caroll's dinner table but instead take inspiration from the essence of his character.  Led by our director Or Benezra-Segal we worked as a company to devise a play based on who these people are and where we thought the night would take them.