REVIEW How Amadeus at the National Theatre floored me. 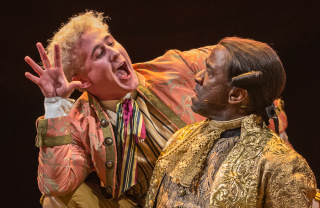 When I sat down to watch Amadeus at the National Theatre I was expecting to laugh, to be entertained, to be dazzled by the 18th century opulence, live music and operatic singing but I wasn't expecting to cry.

Peter Shaffer's play - which the National has just announced will return next year - is the story of successful and renowned court composer Salieri (Lucian Msamati) whose position, love of music and faith is challenged when the prodigiously talented, extremely precocious and obstreperous young Mozart (Adam Gillen) arrives in Vienna.

Mozart's skill at musical composition is so exceptional it makes everyone else, including Salieri, look mediocre and he isn't happy with that. But neither is he happy with the fact that God seems to have bestowed such an amazing talent on such an uncouth and uncivilised youth when he himself is a devout Catholic. The mixture of jealousy and contempt starts to eat him up and he plots to halt the march of Mozart's growing success.

This production is a spectacle with the Southbank Sinfonia performing live on stage and professional singers taking the parts of Salieri's pupil and Mozart's performers. The costumes are lavish as befits the 18th century court in Vienna - with the odd modern touch such as Mozart's Dr Marten boots and bleached blond white hair.

Continue reading "REVIEW How Amadeus at the National Theatre floored me." »

I'm a firm believer in 'you get what you pay for' except when it comes to theatre because the rule book seems to get thrown out of the window. The last production of The Glass Menagerie I saw was at the Young Vic in 2011 where I probably paid £20 or less and got a perfect view. I was chuffed to bits when I managed to nab a pair of the special offer £20 tickets in the stalls for The Glass Menagerie at the Duke of York's, particularly as it was chance to see Broadway star Cherry Jones and Stan fav Kate O'Flynn.

The seats were on the end of row H, seats that if you were to book them now you would pay nearly £60. Good seats, or so I thought. The problem is that the production design is such that whenever the actors are stage left on a balcony or something, I couldn't see them. Then in the crucial final act when Laura and the gentleman caller are sat on the stage talking, I had the head of the person in front obscuring my view because the rake is too shallow. It meant I couldn't see both characters at the same time and had to make a frustrating choice as to which to watch and therefore felt like I was only getting half of the conversation - do you watch the person talking or the person reacting?

I mention this as a warning: if you are booking avoid the edge of the rows (higher seat numbers). And also to illustrate why the West End is far from the best place to see good theatre in London. I also want to set my review in context because not be able to see properly did spoil my enjoyment - this is a play of nuances.

So what of it? Well Cherry Jones didn't disappoint as the overbearing mother trapped in her own romantic notions and desires for her children. She was beautifully stuck in past as the Southern Belle swishing around in her lacy frock, talking of gentlemen callers and her youth with rose-tinted glasses. All the while her children Tom (Michael Esper) and Laura (Kate O'Flynn) fight to appease her and fight their own wishes and desires.

Roaming through the Roman Tragedies - is this the ultimate in immersive theatre?

Got this email yesterday ahead of our visit to see Ivo Van Hove's Roman Tragedies at the Barbican next month:

Refreshments will be available to purchase on stage using cash or contactless payment and you may enter and exit the auditorium whenever you like. Use of mobile phones to access the internet is permissible throughout the performance although we kindly ask you to silence phones and ensure you switch off the flash when taking photos.

We look forward to welcoming you to the Barbican Centre.

Is this the ultimate in immersive theatre? The audience become the extras in the background "shopping" or being a tourist and stopping to take a photo? Curious to see how it works. It could be brilliant, it could be a massive distraction or the British proclivity to avoid embarrassment might prevail and people will stay put.

That was January in London theatre land 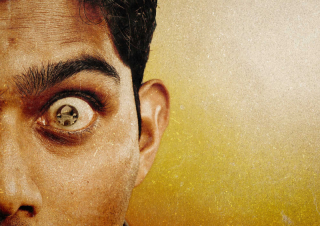 Guards at the Taj, Bush Theatre

January was a fringe fest for me with some cracking productions. I definitely recommend Out There On Fried Meat Ridge Road at the White Bear (finishes Feb 4) and BU21 at Trafalgar Studios 2 (finishes Feb 18) and from the off West End sphere Dirty Great Love Story at the Arts Theatre is a real hoot (finishes Mar 18).

* Biggest news, obviously, is Ben Whishaw treading the boards at the Almeida again. He's moved on from playing a Greek god in Bakkhai to playing a tech billionaire who thinks god is talking to him. It's a new play called Against by Christopher Shinn and to say that I'm excited to see it, is an underestimate.

* The Ben Whishaw news has almost over shadowed the announcement of a new James Graham play, Ink, at the Almeida as part of the the same season. This time Graham is taking on Fleet Street at the end of the sixties. Given how much I enjoyed This House, this has a lot of promise.

* The Bush Theatre reopens its doors after redevelopment work and kicks things off in April with Jamie Lloyd directing Guards at the Taj by Rajiv Joseph. It seems to be a theme for Jamie Lloyd this year to direct in smaller theatres - his current production is Pitchfork Disney at Shoreditch Town Hall which will be followed by a new Philip Ridley play Killer at the same venue.

Continue reading "That was January in London theatre land " » 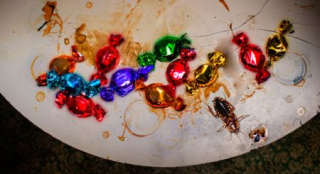 Tom Rhys Harries is hanging from some ceiling pipes, wearing a sequinned jacket. I'm having flash backs to when he played Silver Johnny in Mojo but here the boot is firmly on the other foot. In Mojo he was an innocent victim, in Pitchfork Disney he is a charming threat in fact his performance reminded me a little of Ben Whishaw's Baby who tortures Silver Johnny.

Here he plays Cosmo Disney, hair bleach blond, shaved at the sides and quiffed, with dress shirt, bow tie and sequinned jacket. He's a performer but as this is a Philip Ridley play his is a macabre and stomach churning act.

Cosmo turns up sick at the house of siblings Haley and Presley (Hayley Squires and George Blagden) where they live in almost perfect, self-induced isolation, eating only chocolate and entertaining each other with retelling the same stories. Cosmo disrupts the routine and you can never quite tell whether his motives are good or bad and then his associate Pitchfork (Seun Shote) turns up. Is the terror about to start?

If you've seen Mercury Fur, Fastest Clock in the Universe or Tender Napalm you'll have an idea Philip Ridley's poetic, metaphorical style. He gives an impression of a dystopian world outside the house without ever explicitly describing it. Haley and Presley talk of their dreams and nightmares so how can you tell what is real and what is part of their imagination? And if it is imagination it chocolate coated-macabre, where things are not quite right and not quite off. There is a pervading sense of disquiet as the plays slips from child like innocence to horror in the flick of a grass snake's tongue. Dreams can turn to nightmares so can you ever truly escape?