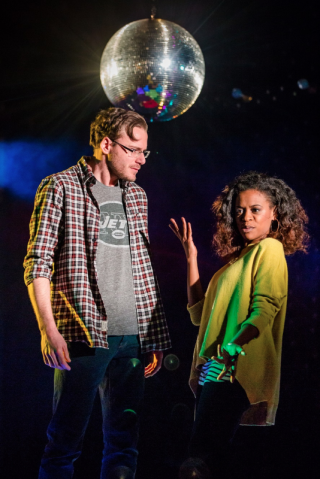 Richard Marsh and Katie Bonna's comedy Dirty Great Love Story is a modern poem to romance but Romeo and Juliet this isn't. This is a love story that starts at a hen and stag party, a story of drunken sex, morning after awkwardness, shoes that hurt and rescuing escaped boobs. It's a love story where climbing a vine to a balcony takes a lot longer and a lot more effort than the movies would have you believe.

Ayesha Antoine plays Katie (and CC) who is out on a hen night with her mates. She's recently been dumped by her boyfriend (he who must not be named) and her friend CC is determined to get her a shag. Felix Scott plays Richard (Westie and Matt) and is on a stag do with his mates and his friend Westie is equally keen to pair Richard off with someone. Their eyes meet across a pulsating, sweaty, alcohol drenched dance floor but the course of true love never did run smooth.

Written in verse we are taken on a two year journey of mishaps and relationship mayhem. Those around Katie and Richard seem to be entering a new phase of their lives while our two mismatched, one-night stand, lovers seemed destined never to get it on again.

Ayesha Antoine and Felix Scott switch swiftly between characters without missing a beat of the poetry. They deliciously deliver the misinterpretations and missteps of Katie and Richard and the antics and opinions of their friends.

HENRY V - Set in a First World War field hospital, Antic Disposition bring Shakespeare's play about the warrior king to Southwark Cathedral as part of a UK cathedral tour. You can see it there on Feb 2, 3, 20 & 21. For more details and other tour stops head to Antic Disposition's website.

WAR TIME COMEDY Flew the Coop is a humorous take on an amazing but controversial story based on true events: the romance between young Silesian translator Rosa Rauchbach, debonair British POW Horace Greasley and an inordinate number of stolen chickens. New Diorama Theatre 14 Feb to 4 Mar.

TEEN TALES #1 Filled with school riots, first loves, beached whales, cinema, space and sex, RUN tells the story of Yonni (Tom Ross-Williams), an orthodox, Jewish teenager, who sneaks out over the Sabbath and causes a world of trouble. The Bunker Mar 20 to Apr 1 (70 mins without interval). Also in Brighton prior to it's London run.

REVIEW The Marx Brothers come to London in The Doppel Gang, Tristan Bates 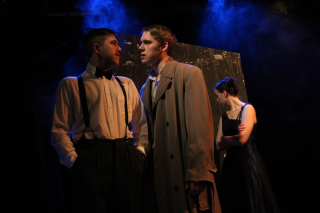 It is London during the blitz and the city's inhabitants seek the distraction of entertainment but unfortunately not at one theatre. With the audience numbers dwindling and staff leaving for better prospects the theatre is about to go under. But what if they pretend to be the crowd-pulling Marx Brothers? It's a bold plan and some of the company are only convinced by the promise of a decent pay packet, for once. But what else is going on behind the scenes?

The Marx Brothers skit, when we get to it, is really well done and had me grinning but the problem with The Doppel Gang is that the rest of the play doesn't quite match it. The relationship between Peter Stone's mysterious Tommy and Rachel Hartley's Rachel is the main sub plot and yet these characters feel underused at the expense of some mildly funny and often laboured 'life back stage' comedy. As a result what should be the source of mystery and drama, the counter point to the comedy, feels under developed.

There are some laughs but not enough to be a fully fledged comedy and without the fleshed out drama it feels like is an overly long and strangely contrived set up for The Marx Brothers skit.

The Doppel Gang is an hour and forty minutes long with an interval. I'm giving the play two stars plus an extra star for the Marx Brothers scene. It's on at the Tristan Bates Theatre until Feb 11.

Ben Whishaw is back on stage at the Almeida #almeidatheatre

So I wake up to this news in the Guardian:

August will also see the debut of Pulitzer-nominated playwright Christopher Shinn’s new work, Against. Ben Whishaw will play Luke, a tech millionaire convinced he is the next messiah, whose calling is to confront violence in America.

Which is exciting not only because Ben Whishaw is back on stage (obviously) and at the Almeida rather than in the West End but also because it's a contemporary play and it feels like a while (The Pride - half contemporary - so perhaps Cock in 2009?).

James Graham will also debut a new play about newspapers in the 1960s. Given the brilliance of This House (currently enjoying a revival in the West End) this should be cracking. 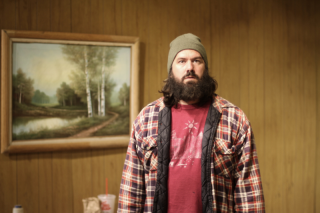 It's a bitterly cold, dark January night in the maelstrom of Trump's impending inauguration and May's hard Brexit speech and a piece of 'vital', 'essential' or 'urgent' theatre is not really what you want - or need. Thank heaven's then for Keith Stevenson's Out There On Fried Meat Ridge Rd which, in its 65 funny minutes of misfit, odd, dark, craziness has a warmth that leaves you feeling that not quite everything is wrong with the world.

Set in rural West Virginia, Mitch (Robert Moloney) has lost his job, been kicked out by his girlfriend and has a condition which makes him sweat profusely. JD (Keith Stevenson) lives in a motel, helps out with odd jobs and advertises for a room mate. JD and the room aren't quite what Mitch expects when he turns up to have a look but then neither is the slightly scary un-PC motel owner Flip (Michael Wade) or the warring couple next door - the philandering Tommy (Dan Hildebrand) and crystal meth addict Marlene (Melanie Gray).

But these are all characters that defy initial impressions. On the one hand JD has never heard of the state of Maine or that lobsters come from the sea but on the other he knows Latin. They are the sort of people whom you'd expect to see on the Jeremy Kyle show and yet they occasionally use language you'd hear on Radio 4. Just as Marlene's 'most beautiful' painting is a woman with a snake head the juxtaposition isn't quite right, it is surreal, slightly odd, perhaps a little sinister.

Rehearsal photos have arrived for the hotly anticipated Sex With Strangers at Hampstead Theatre starring Emilia Fox and Theo James. Probably shouldn't admit that Theo James makes me a bit giggly but he does, there I said it.

Directed by Peter DuBois, Laura Eason's comedy tells the story of two writers trapped by snowy weather in a remote B&B. It opens for previews at Hampstead Theatre's main stage on Jan 27 and runs until Mar 4. 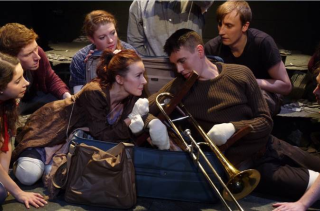 GENDER & RACE Am I black enough? straight enough? Jamaican enough? Created and performed by performance artist Rachael Young in collaboration with dance artist and choreographer Dwayne Antony, OUT examines and explores the stigmas associated to queerness and gender conformity within the black community. It's touring but has a short run at the Yard Theatre in Hackney from Feb 14-18 and is a 9pm start.

WOMEN'S FOOTBALL It is 1881. It is 1921. It is 2017. Four women from across the centuries live, breathe, and play football. Whilst each of them face very different obstacles in pursuing their dream profession, the possibility that the beautiful game will change their futures - and the world - is tantalisingly close. Offside is told through lyrical dialogue, poetry, and prose, placing the audience on the touchline of the game of a lifetime and its tour include a stint at Clapham Ominbus Mar 27-28.

WRITER IN CAPTIVITY Borrowing from some of his work and real events Don Quixote in Algiers tells of story of when writer Miguel de Cervantes was captured by pirates, examining truth, identity and freedom.  White Bear Theatre in Kennington 7 Feb - 4 Mar.

TOP TRUMPS At Theatre503 in Battersea there is a week of plays in which playwrights respond to the election of Donald Trump as president of the US. Timed to coincide with his inauguration, each show will feature 12 short plays including work by Caryl Churhill, Neil LaBute and Roy Williams. Theatre503 19-21 January.

Review: Sketches of a relationship in Abigail, The Bunker

Fiona Doyle's relationship drama is told in fragments that jump back and forward through time. A man in his 40s (Mark Rose) and a woman in her 20s (Tia Bannon) meet at Berlin airport and strike up a relationship. They travel to bucket list destinations, celebrate an anniversary and things fall apart.

The set of stacked boxes at the back of the stage is used cleverly as the scenes and locations change but the narrative falls down because the characters are too nebulous, too sketchy. You get hints and clues but not enough to really form a picture of who these people are and what motivates them. In order to understand the relationship's ultimate failure you need more of an understanding of the people themselves.

There are hints of the woman's childhood experiences and hints of her motives for being in the relationship, hints of more complex emotional forces and experiences at play but not enough to help you to fill in the gaps and form a proper picture. Instead you get a woman who is volatile and needy but you aren't sure why. The man is even more of an enigma. We know he has a bucket list of places to visit and he seems a kind, gentle sort of person but not much else. Perhaps there was more that I missed as it wasn't always easy to hear what Mark Rose was saying.

What you get is a jumble of exchanges that are a clunky mix of poetic, philosophical and banal. It builds to a scene which would be more at home in a thriller but given how little you know about these people it comes across as just odd.

After 60 minutes I was left scratching my head none the wiser about the two people who's relationship I'd just watch unfold. It's two stars from me and runs at The Bunker until Feb 4.

Production photos: Imelda Staunton and the Who's Afraid of Virginia Woolf cast #whosafraidofvirginiawoolf

This is on my play hot list for this year as I love Imelda Staunton and Who's Afraid of Virginia Woolf is one of those iconic plays I've not yet seen. It also stars my Game of Thrones fav Conleth Hill and Luke Treadaway whom I haven't seen since the wonderful Curious Incident of the Dog in the Night-time. Oh and James McDonald is directing and he's directed Mr Whishaw twice in the past (Cock and Bakkhai). So all in all, pretty excited.

It opens for previews at the Harold Pinter Theatre on Feb 22 and runs until May 27.

My love for Imelda Staunton as expressed in two reviews:

The meh play but outstanding Imelda (A Delicate Balance, Almeida)

Review and production photos: The awkward, honest and hilarious truth in #BU21 at Trafalgar Studios 2

Using real testimonies from terrorist attacks around the world Stuart Slade's play, BU21, imagines the aftermath of a plane being bombed out of the sky over London. It follows six people - a combination of victims, witnesses and those who lost loved ones - and in a series of interweaving monologues charts what they go through physically and mentally.

There are the obvious emotions of anger, fear and guilt but it is in the detail, those moments when the sub conscience brain operates without the usual societal and moral filters where thing gets really interesting. Sometimes awkward, sometimes painful, sometimes funny and not always PC, these are the revealing moments, the moments when you get glimpses of how humans behave in the most extraordinary situations.