That was November in London theatre land 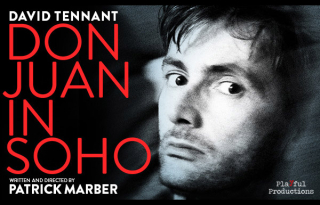 Feels like November was a big month for announcements...and thesp spotting.

* Even being out of the country at the time I couldn't miss the announcement that David Tennant is returning to West End stage in the 16+ age rated Don Juan of Soho at the Wyndhams Theatre next year. He'll be joined by Adrian Scaraborough and Gawn Grainger with further casting to be announced

* Barely a month goes by without the National Theatre announcing new productions and it's particularly exciting to see Kate Fleetwood cast in new play Ugly Lies the Bone in which she'll play an American soldier returning home after three tours in Afghanistan.

* The Boys In The Band, starring Mark Gatiss, which enjoyed a successful run at the Park Theatre, is transferring to the Vaudeville Theatre for a two week run in February. My review from the Park Theatre is here.

* Double excitement from the Royal Court as next year they've got a new Simon Stephens play (Nuclear War) and a new Jez Butterworth play (The Ferryman). Just need to take a moment to absorb that. As Sam Mendes is directing The Ferryman and Sonia Friedman Productions are involved I'd put money on a West End transfer and at least one really starry name in the cast. Not surprising it's already sold out apart from the Monday day seats.

Continue reading "That was November in London theatre land" »

Holidays got in the way of me posting October's theatre hottie and girl crush so I decided to package up it up with November into a bumper edition - see it as an early Christmas present.

Theatre hottie: This was a tough one, because it was a month where the suave, sophisticated and hot Mark Strong was on stage in The Red Barn at the National, although he did keep his shirt on. But he was just pipped at the post by Jack Derges as 'The Cowboy' in The Boys in the Band. I might have giggled like a 14-year-old when he first stepped on stage looking like this. Certainly, there was a knowing look that passed between PolyG and I. It must have been such hard work for Mark Gatiss. What can I say, I'm shallow. Mark Gatiss and Jack Derges in The Boys In The Band, Park Theatre. Photo Darren Bell

The Boys in the Band is transferring to the Vaudeville Theatre for a two week run in February.

Review: Sparkling fun and Harry Enfield in Once In A Lifetime, Young Vic Theatre This time of year needs a bit of fun and sparkle from theatreland and the Young Vic's Once In A Lifetime fits the bill perfectly.

The story is about an artistic gold rush; Hollywood's first ever talking motion picture is a massive hit and there is a scramble to produce more. The problem is that Hollywood's actors are silent movie stars not used to speaking on camera. Down on their luck variety performers Jerry (Kevin Bishop), May (Claudie Blakley) and nice but dim George (John Marquez) spy a business opportunity and jump on a cross-country train to California to set up a speech school.

On the way they meet celebrity gossip columnist Helen Hobart (Lucy Cohu) whom they wheedle into helping them with an introduction to movie mogul Herman Glogaur (Harry Enfield).

Cue what is part farce, part satire on theatre and Hollywood types who look down on each other and where guile rather than talent, luck rather than intelligence gets you ahead. It is a shallow, glamourous and opulent world full of champagne and sequins (mainly on Lucy Cohu's amazing dresses) where there are so many egos and administrative layers that it swallows people (and money) up.

Continue reading "Review: Sparkling fun and Harry Enfield in Once In A Lifetime, Young Vic Theatre" » 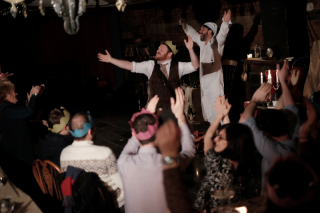 PANTO Ricky Whittington and his Cat is a timely, satirical and funny take on old-school panto featuring song, dance and a WEALTH of comic talent and guest cameos. Catch it at the New Diorama from December 12 to January 7 with a special New Years Eve performance and party.

HUMANETTE PUPPET COMEDY An absurd and endearing portrait of Christmas, like The Royle Family meets Phoenix Nights, in miniature Holy Presents is on at the Camden People's Theatre from 6 to 17 December.

COMEDY The BAC has a season of festive fun including two festive stand up shows: A John Kearns Christmas (6-10 Dec) and Josie Long Hosts Christmas This Year (13-17 Dec). For more details head to the BAC website.

SIMON STEPHENS' CHRISTMAS Not his actual Christmas but his play Christmas which Theatre N16 is reviving for a run from 11 to 22 December. It's one week ‘til Christmas. A bleak bar in the heart of London’s East End. Landlord Michael Macgraw is setting up for the Saturday punters - all two of them; young Billy Russell, a foul-mouthed football fan and Seppo the barber with an odd fondness for Drambuie and dreaming of Vienna. Christmas, a time for family, goodwill and peace to all men, but not for these three.

OPERA PANTO The King's Head Theatre in Islington has chosen Pinochio for it's festive treat. Performed by a cast of Charles Court Opera with a whale-full of jaw-dropping musical numbers from pop to opera, and puns and tomfoolery galore, this year's 10th anniversary celebration promises to be the biggest and best yet. It runs from Dec 1 to Jan 7.

DINNER & CHRISTMAS CAROL Dickens' classic festive tale comes to the Above the Arts Theatre in Covent Garden served over a two-course dinner. Food and theatre are dished up from Dec 12 to 31.