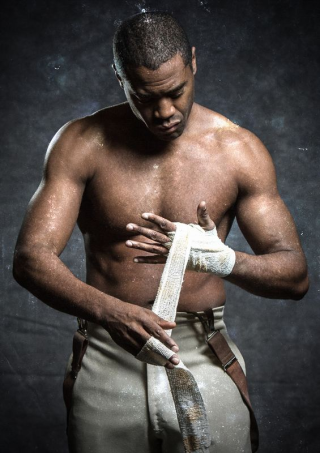 * Justin Audibert directs My Mother Medea at the Unicorn Theatre which tells the story of Medea and Jason through the eyes of their children. It runs from 17 Oct to 25 Nov.

* Edinburgh fringe show Trumpagedon arrives at the King's Head Theatre in Islington in time for the final leg of US presidential campaigning so you can imagine what it would be like to have Donald Trump as president before it actually happens. Laugh before you cry from 16 Oct to Nov 8.

* A comedy about a tragedy is how Borderline is described, set in the Calais Jungle it is a devised piece with European and refugee artists. It is part of the Voila festival at The Cockpit in Marylebone and runs from Nov 2 to Nov 6. Trailer available here.

* The S0 & So Arts Club in the City will host ageing spinster Dr Evadne Hinge in the comic opera The Dowager’s Oyster. Best known for performing with her cabaret partner Dame Hilda Bracket (now deceased), Dr Hinge is dusting off the old tiara and giving it one last whirl in Louis Mander’s rip-roaring Carry-On of a “kiss-me-quick whodunit” comic opera, which had a first outing at the Arcola Theatre earlier this year.

* Tonight With Donny Stixx by Stan-fav Philip Ridley arrives at the new Bunker Theatre in Southwark from 8 Nov to 3 Dec. Starring Sean Michael Verey (Pramface, Radiant Vermin) and directed by David Mercatali (Blue Heart, Cargo) it is a one man show about our celebrity-obsessed culture, the damage our parents can inflict on us and the dangers of delusion.

* The Bush Theatre’s production of The Royale by Marco Ramirez will open at the Tabernacle in Notting Hill in November. The Royale returns following the UK premiere and sell-out run in spring 2015 and will again be directed by the Bush Theatre’s Artistic Director Madani Younis. It runs from 3 Nov to 26 Nov.

* Norfolk playwright James McDermott's debut play Rubber Ring opens at the Pleasance in Islington on 31 Oct until 6 Nov. It tells the story of a sexually confused teenager living in rural Norfolk: "I'm sixteen. I don't know whether I like boys or girls. I live in Sheringham. I'm fucked. Well I'm not actually and that's the problem." 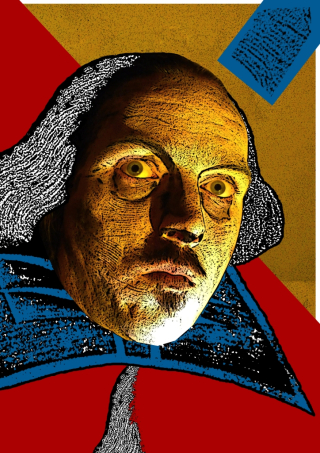 As the antithesis of Shakespeare's 400th anniversary celebration Robert Crighton has come up with a two part performance that (sort of) questions our obsession with the bard.

In the first half he plays a sweating, divorced professor obsessed with the question of authorship of Shakespeare's plays. He recounts how he tested several theories while playing a cat and mouse game with the 'leather patches on elbows' who want to protect Shakespeare as the author. The result is an ever more paranoid professor with ever more ridiculous theories. The second half sees him channelling the Bard who feels if he can't be 'undead' then he just wants to be left alone and forgotten about.

There are some chuckle-worthy moments and the occasional witty line - it helps if you are familiar with Shakespeare's contemporaries and the theories of authorship - but there just isn't enough of it to fill two 45 minute segments. There are sections which could perhaps work as short sketches but it needs to be cleverer and a lot funnier for a longer piece.

Crighton ends by arguing that we should put on new writing rather reviving old stuff and he does have a point but the old stuff is really rather good which is why it has lasted.

It's two 45 minute segments with a 15 minute interval and I'm giving it two stars. It is on at Theatre N16 in Balham until 13 October. 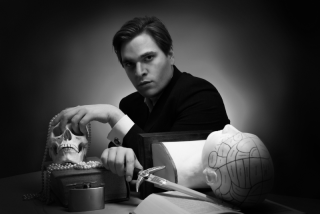 * Still Ill, a play which looks at psychosomatic illness and has been devised with the help of real sufferers, opens at the New Diorama Theatre on Nov 1 until Nov 19: Like many young actors, Sophie earns extra money by playing a ‘patient’ for medical students to practise on. But as her career begins to take off and she gets the job of a lifetime in a TV medical drama, her body begins to betray her. This time, the symptoms are all too real.

* The Canal Cafe Theatre in Little Venice kicks off a season of American plays with Driving Miss Daisy which runs from 18 Oct to 5 Nov. This ‘tramersive’ production (staged in traverse with that action happening in and around the audience too) is a fresh look at Uhry’s classic play.

* Orson Welles first play Bright Lucifer kicks off a series called Lost Classics at the The White Bear Theatre in Kennington in November. The play runs from Nov 8 to Dec 3: Jack Flynn’s in movies – “creature features” – quite the celebrity, as far as men in rubber masks go. Celebrity enough that when his wife disappears in a flurry of sex scandals and drug parties, his face ends up on front pages. On the verge of a nervous breakdown, Jack retreats from the world with his brother Bill to an isolated family cabin, planning a long weekend of whisky, fishing and brotherly love. All doesn’t go to plan. As the brothers descend into madness and paranoia, only one question matters; who or what is Eldred Brand?

* The Right Ballerina makes its London premiere at the Hen & Chickens Theatre in Islington after making its debut at The Lowry in Salford. It runs from Oct 11 - 22 and is described as a new play that eviscerates our perception of right/left wing politics. The play is inspired by the real life case of Simone Clarke, a ballerina with the English National Ballet who was “outed” as a BNP member in 2006.

* Fives Guy's Chillin' arrives at the King's Head in Islington from 15 Oct to 5 Nov. It's a verbatim play about the gay chill out scene and follows a run at the Edinburgh Fringe and off Broadway.

* Maud Dromgoole's Acorn opens at the Courtyard Theatre on 4 Oct until 29 Oct. It radically re-imagines two mythic women in a play that explores the power of stories, and how we come to write our own. Combining dark humour with lyricism, fury and wit, projection and an original score, Acorn is an all-female underworld myth for a modern age.

Tom Stoppard's Travesties, Menier Chocolate Factory - great acting, not sure about the play

REVIEW Tom Hollander's Henry Carr has just shuffled onto the stage. 'Oh it's him!' says the old lady sat behind me loudly, so loudly he could probably hear her from the other side of the stage. I stifle a laugh.

This is a play of Henry Carr's reminiscences from his stint at the British consular in Zurich during the first world war. Zurich has become a magnet for artists and political exiles and his acquaintances include James Joyce (Peter McDonald), Tristan Tzara (Freddie Fox) - one of the founders of Dadaism - and Lenin (Forbes Mason) but, as his forgetfulness suggests, his recollections may not be accurate. While Tom Stoppard's play Arcadia explores maths and science, here he explores art, war and revolution.

There is a farcical love story of sorts. Tzara fancies Henry's sister Gwendolene (Amy Morgan) but she doesn't like his radical, anarchic art movement so he's pretending to be Jack, a less radical fictional brother of Tzara's. Meanwhile, Henry fancies Cecily (Clare Foster) a librarian who is helping Lenin with research for a book. All the while James Joyce admires Lenin from afar and is trying to manage a production of The Importance of Being Earnest in which Henry will take a leading role.

Travesties is performed with such energy and verve, the delivery gunfire quick and clipped it is a skill in its own right. The performances I enjoyed very much, particularly Freddie Fox who was on fine form but I have a problem with the play. It's not the first time I've had this problem with a Tom Stoppard play in fact I'm starting to think Stoppard and me just don't get on. 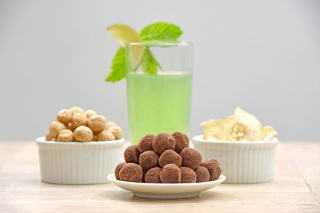 Busy and exciting month in the world of theatre not least because TodayTix launched a range of 'silent snacks'. This is something I can whole heartedly get behind as the rustle of sweet wrappers and other snacks is up there with talking as the most annoying audience behaviour. It is only a promotion but I hold out hope that theatres could be persuaded to stock only quiet edible items...These are the some of the other highlights:

* A stage adaptation of Khaled Hosseini's The Kite Runner was announced. It's one of my favourite books and to say I'm curious as to how it is going to be adapted is an understatement. It opens on December 21 at the Wyndhams and runs until March.

* Ruth Wilson was confirmed for Hedda Gabler at National Theatre and Rafe Spall has also joined the cast. With Ivo Van Hove directing this just might be too much excitement. It opens on December 5.

* The relationship between Trafalgar Studios and Broadway's New Group continues as the latter brings its production of Buried Child starring Ed Harris and his wife Amy Madigan to the theatre in November. The New Group also produced Jesse Eisenberg's The Spoils which had a run at Trafalgar in the Summer.

* The Lyric Hammersmith's Spring season is shaping up to be really interesting with the European première of Seventeen which is described as a coming of age story set on the last day of school - performed by septuagenarians. And then Duncan Macmillan (People, Places, Things and 1984) is adapting Paul Auster's City of Glass for the stage. The creative team behind the likes of The Nether, Wolf Hall, Let the Right One In and Harry Potter are also involved.