That was May in London theatre-land 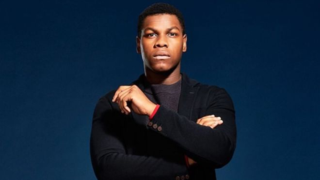 May was the month I went to a musical, sort of. It was also the month I saw probably my favourite Hamlet so far. But in other news there was quite a bit of celebrity casting...

* John Boyega of new Star Wars film fame is to star in a Jack Thorne adaptation at Woyzeck at the Old Vic. Is this a bit of a coup for the Old Vic? Boyega cut his teeth in youth theatre but has been catapulted into the limelight through the Star Wars franchise.

*Matt Smith of Dr Who fame is in new play Unreachable with Stan fav Jonjo O'Neill at the Royal Court next month. I'm hopeful that it will be far more inspiring than the trailer in fact I think the trailer is a strong contender for worst of the year.

* Much excitement for us Ivo Van Hove fans when the Barbican announced a Toneelgroep residency next year. There will be three plays including a six hour epic based on Julius Caesar, Coriolanus and Antony & Cleopatra. His four and a half hour Kings of Power was just a warm up it seems. It is not going to be a bum-numbing experience though as apparently the audience will be invited to move around the auditorium and even tweet throughout. He's also roped in Jude Law to star in Obsession.

Continue reading "That was May in London theatre-land" » 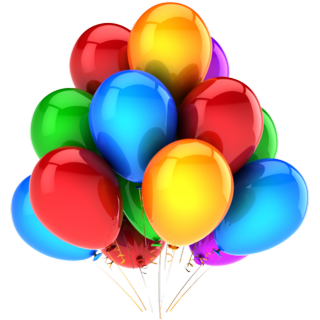 In April 2010 I wrote my first post on my new theatre blog and six years later, here I am writing my 1,000th. My love for theatre and writing about it hasn't waned and neither, it seems, has the interest from those of you generous enough to indulge me by reading what I write. So thank you, it still surprises me that people actually do take the trouble.

To celebrate I've been thinking about those more unusual experiences you very occasionally have as an audience member - I see it as a sort of initiation, a test of endurance and dedication, so here are my five:

1. Spat on by an actor - That moment when you are sat on the front row, somewhere like the Royal Shakespeare Theatre and there is an actor walking towards you giving an impassioned and earnest speech with a generous accompaniment of spittle spraying far and wide. You brace yourself as they get closer.  I was once spat on by the lovely Alex Hassell, a former Hottie of the Month so I can't complain too much.

2. Splashed by stage blood - During Jamie Lloyd's production of Richard III they handed out protective T-Shirts for those sitting in the front row. I just wore dark colours and saw it as a rite of passage.  My reward was a few splashes on my foot. I have seen someone walk out with a nice smear right across their cheek. I live in hope. 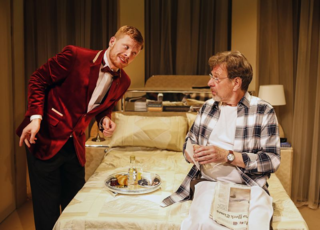 Bit of a coup getting Hollywood legend Jeff Bridges in your play. Sort of. He appears in pre-recorded Skype calls with Matt (Michael Brandon) who is staying in a small, London town house hotel off the Kings Road.

Matt is a recently widowed American taking a break in London - a city he visited with his wife - and Bridges plays his therapist Dr Kozlowski. He is lonely and Kozlowski encourages him to fill his days with activity, things that he enjoys doing. Matt seeks companionship and intimacy with a Russian prostitute Sheena (Diana Dimitrovici) who has boyfriend problems - the blow up doll he bought just doesn't scratch the itch.

The hotel where he is staying is like something out of mildly amusing sitcom (including the presumably unintended wobbly set). Freddie (Luke Pitman) is the camp concierge and down the corridor from Matt is long term hotel guest Ellen Mellman (Cherie Lunghi). Ellen is a slightly crazy cat lady who's aged feline pet Christina keeps going missing. She also has a bit a soft spot for Matt.

As bitter sweet comedies go this doesn't quite work. There are some good individual elements but there are too many stereotypes at play and Neil Koenisberg's dialogue just isn't strong enough to balance it. 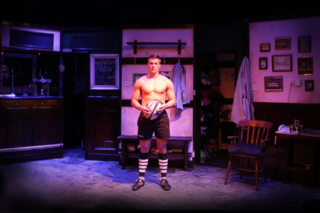 The Old Red Lion's tiny stage has been transformed into part bar/part rugby pitch for this coming out story. James 'Jimmy' Hall's rugby career is taking off as his team have been promoted but he has a secret he is desperate to keep.

He has a girlfriend but he also has a boyfriend and in the testosterone-fuelled world of rugby that is something he wants to keep quiet. But with the big league comes big press interest and secrets don't stay secret for very long.

The starting point for Richard D Sheridan's one-man play is when Jimmy accidentally swears during a TV interview after his team wins promotion. The clip goes down a storm on social media but in hindsight it will be the least of Jimmy's worries and is perhaps a hidden warning of what is to come. Matthew Mars plays all the characters in Jimmy's story taking us through his celebrations with his team, meetings with the boss, his relationship with his girlfriend, visits to his parents and his boyfriend.

Review: A Midsummer Night's Dream, Southwark Playhouse or when Stan went on stage to play a flower #7actordream 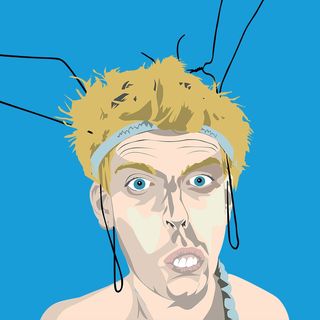 At the end of this promo video for Go People's A Midsummer Night's Dream an actor says that 'everyone single person will come away with a slightly different experience' and they weren't kidding. I've had actors deliver lines at me, ad lib lines at me, throw stuff at me, sit next to me, even fall in my lap but I've never been dragged on stage to play a part before. Not until last night at the Southwark Playhouse anyway.

This isn't A Midsummer Night's Dream for purists, Go People have added an extra premise that they are a company of seven actors attempting to play all 17 parts. They also only have about four props between them but are going to give it a go with a bit of imagination and imagining from the audience.

When Puck (Melanie Fullbrook) is asked by Oberon (Ludovic Hughes) to fetch a wild pansy to use as a love potion, in lieu of a prop flower Puck grabbed me. So there I am in the middle of the stage with Oberon gripping my hands and intently telling me all about how he discovered said love potion. At least I think that was the speech he was delivering, at the time I was more concerned with the fact that I was actually on the friggin' stage and feeling just a teeny bit self-conscious.

But it didn't end there. I was whisked off to wait back stage by Puck while the next scene was in progress.  Then Puck said something like 'have fun with it' and lead me back on stage to 'work my flower magic'. Randomly waving your hands sort of works for a magic potion being administered, doesn't it? Later Oberon assisted by holding my hand and moving it in a delicately, elegant gesture. And I just wanted to face palm thinking 'yep that would have been better'.

Now at this point I should add that earlier we'd been asked to imagine there was a large oak tree in the middle of the stage which all the actors subsequently stepped around when moving from one side to the other. So when I was excused from my flower magic duties I felt I should carefully avoid the imaginary tree on my way back to my seat, in keeping with the spirit of things, which seemed to go down quite well.

Continue reading "Review: A Midsummer Night's Dream, Southwark Playhouse or when Stan went on stage to play a flower #7actordream" » First I should clarify, Ben Miles, he of Cromwell/Wolf Hall fame, isn't the only member of the cast of Alexi Kaye Campbell's new play to have been sent off to get a fake tan. There is a good reason for getting rid of pasty complexions, as the setting is a holiday home on a small Greek island.

English couple Charlotte (Pippa Nixon) and Theo (Sam Crane) are on a work-cation - Theo is a playwright - and American couple June (Elizabeth McGovan) and Harvey (Ben Miles) are taking a break from Athens where Harvey works for the US government. Charlotte and Theo befriend the Americans at the port, well I say 'befriend', they are English so they invite them over to the house they are renting out of politeness rather than because they particularly like their company.

It is 1960s Greece. Harvey is on the one hand, loud and forthright with his opinions but on the other can be introspective and occasionally poetic. He loves theatre and obsesses over the play Theo is working on but there is also something about Harvey that makes you question quite how genuine he is.

June is warm, friendly and dutiful. She likes to drink. Perhaps it something to numb the boredom of her rootless life, following her husband and his job around the world or is it something else?

Charlotte and Theo seem content, they are a happy couple with a social conscious but romantic notions, something that leads them into making a decision that comes back to haunt them.

Now I do have a soft spot for Ben Miles who is in Sunset at the Villa Thalia at the National at the moment (review to come) but this month's hottie is all about the great Dane, the Prince...Hamlet.

The stripped to the waist fight between Paapa Essiedu's Hamlet and Marcus Griffiths' Laertes in the RSC production made it difficult to choose between them but I completely fell in love with Paapa's likeable, hurting Prince. So my theatre hottie for May is Paapa Essiedu. And, because I think the boys have been getting a lot of attention, I'm introducing 'girl crush of the month' see below to find out who is the inaugural recipient. 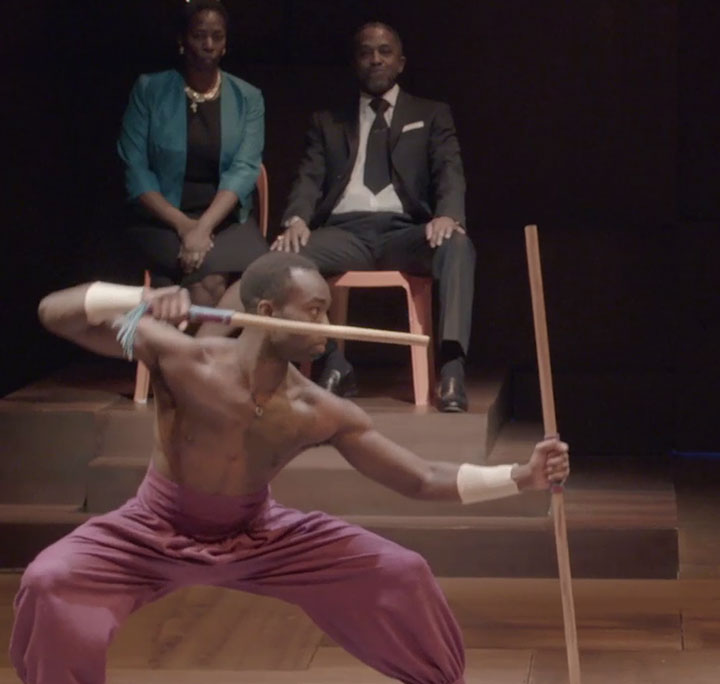 Paapa Essiedu as Hamlet for the RSC

Continue reading "Theatre hottie of the month: May 2016... and introducing girl crush of the month" »