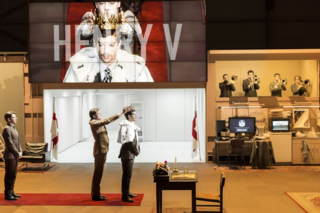 Four and half hours of Shakespeare performed in Dutch (with English subtitles)? With Ivo Van Hove directing I rushed to buy a ticket.

Bart van den Eynde and Peter van Kraaij have combined Henry V, Henry VI and Richard III into one epic play (there is also a smidgen of Henry IV part 2 at the beginning) which Van Hove has set in what looks like a war bunker.

There are three corridors (of power) that feed the bunker and a camera* follows the actors when they disappear down them, the feed appearing on a large screen at the back of the stage. Some of it is obviously pre-recorded - as much as I would love to believe they had a flock of sheep back stage - some of it is live. There are also cameras hidden on stage which film the action from angles not easily seen by the audience.

Kings of War begins quite slowly. Van Hove's naturalistic directing style has the actors in office mode. After the initial coronation scene which is done without speeches just a red carpet and a train of followers, in a device that will be repeated, there is little ceremony. Henry V (Ramsey Nasr) is portrayed more as a military leader at work than king, around him people sit at desks carrying out their usual tasks, finishing writing a sentence before responding to a question.

Theatre hottie of the month: April 2016

At the start of the month there were two potential contenders in my mind. Previous hottie Eelco Smits who is playing Henry VI in Ivo Van Hove's Kings of War (review is on its way). And the pretty and muscular Kit Harington in Dr Faustus.

Now, when Eelco won hottie of the month last September for A Song From Far Away he was naked for most of the play. Poly insisted that he wouldn't be getting his kit off in Kings of War but he did, bless him, strip down to his pants to change into PJ's so that was a real 'shame'.  I'm starting to wonder if he ever keeps his clothes on when he's on stage.

But Eelco already had stiff competition from Kit who'd spent most of the second half of Dr Faustus in his pants and has a body that is no stranger to the gym. It was almost gratuitous. Almost. So the lovely Kit Harington is my theatre hottie of the month for April: 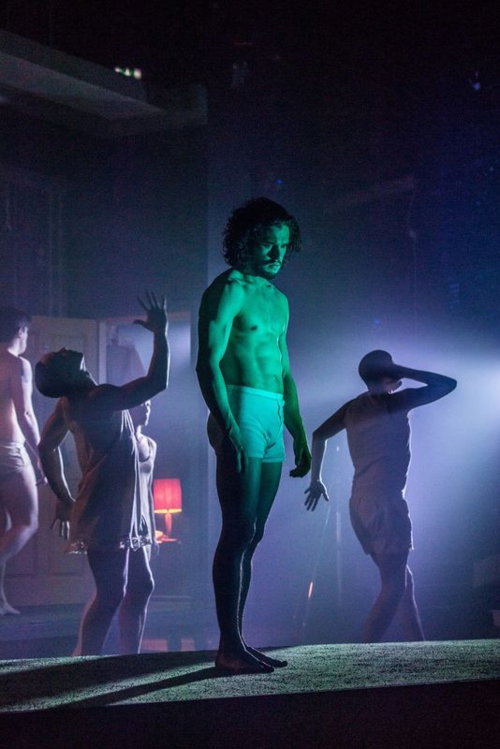