Review: Robert Sean Leonard is Atticus Finch in To Kill A Mockingbird, @BarbicanCentre 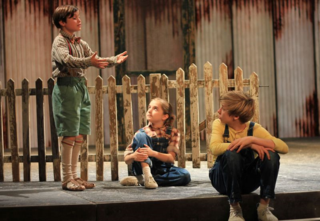 Harper Lee's classic novel was one of a small handful of books read during my formative years that has left an indelible mark so I was mixture of excitement and nerves going to see this stage version.

This production of Christopher Sergel's adaptation, directed by  Timothy Sheader, originated at the Regent's Park Open Air Theatre in 2013, where it sold out two runs before touring and this residence at the Barbican - so the signs were good. It also stars Robert Sean Leonard of House and Dead Poets Society fame.

The story in the book is told the through the eyes of his young daughter Scout (Rosie Boore*) who, together with her older brother Jem (Billy Price) and friend Dill (Milo Panni) obsess about the reclusive Boo Radley who lives next door and plot to try and get him to come out.

It is so with the stage production but Scout's voice doesn't come just from Boore but also the ensemble who each carry a copy of the novel from which they take turns to read passages. The result is an intoxicating mixture of story time and acting,  blending seamlessly the enduring charm of reading the novel with the thrill of watching live theatre.