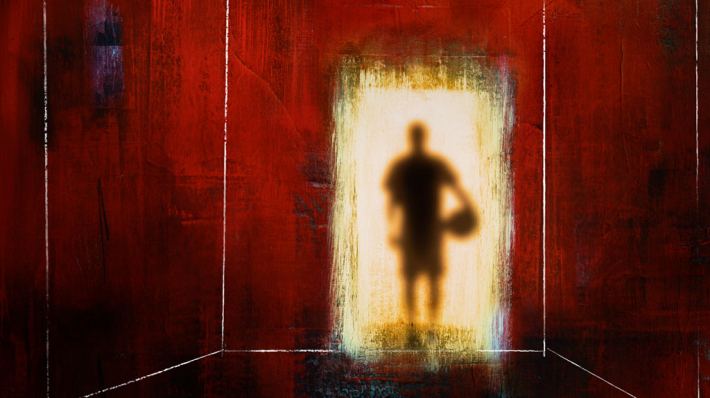 This is the second 'football play' I've seen this year. I'm not a football fan but like Three Lions, this isn't so much about the game as the people involved. Three Lions was set around England's World Cup bid while Patrick Marber's new play is at the other end of the spectrum and set at a non-league football club.

With the story taking place in the club's seen better days changing room, the manager (Daniel Mays) is excited about a talented new kid (Calvin Demba) who wants to play for the team. The kid's arrival is perfect timing as the club has just lost its best player to a rival team at a time when they were on a winning streak. The kit man and ex-Manager (Peter Wight) is also excited but has a fatherly concern for the kid and wants to make sure he is looked after properly.

All three share a deep passion for the game but for each it means different things.  Also for very differently reason they seem quite lonely and carry scars from their pasts which perhaps explains why they all bury themselves in the game.

Five thoughts I’m having about the Donmar Warehouse new season

Booking is already open to Friends of the Donmar and public booking opens 16 June. Full season details are here.

* I was only looking at preview dates so there may well be plenty of seats left later in the run. 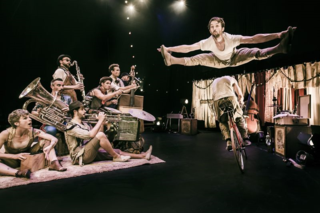 Stepping into the Spiegeltent at London Wonderground on the South Bank is like stepping back in time. This old-style big top is an appropriate setting for acrobatic jazz troop Scotch and Soda. They dress for the period complete with the grime of a travelling, rag-tag troop of entertainers. In fact they are a horse and gypsy cart short of looking completely authentic.

Take your seat early* as they are on stage getting ready. Proud Pierre (Ben Walsh), who leads the musicians, is waxing his moustache, others are preparing their instruments.  The acrobats are playing cards and tricks on each other and the oddball Bush Stranger (Mozes) with his soot-smudged face and impressive beard is roaming around the auditorium.

It sets the tone for some nerve jangling acrobatics accompanied by live jazz. There are aerial stunts with a trapeze and rope that had my palms sweating just watching - there is no safety net, occasionally they put out a mattress. But that didn't have me holding my breath quite as much the stunts performed on a higgledy-piggledy stack of trunks and crates.

My favourite type of seat and my least favourite way of having my ticket checked: 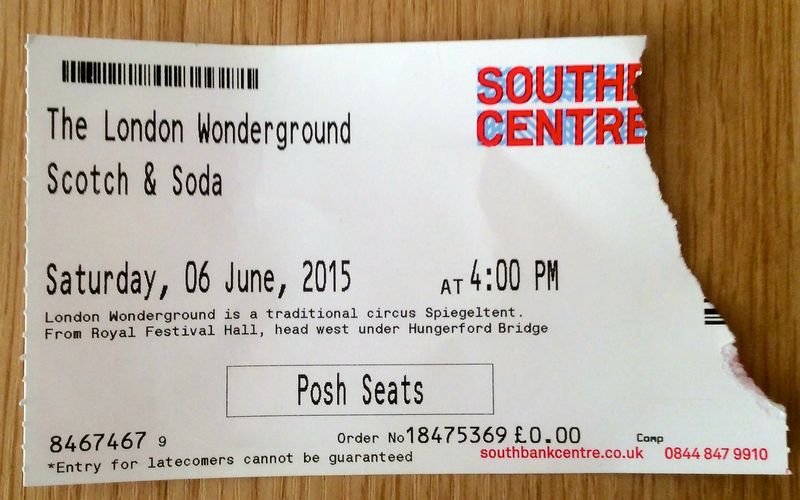 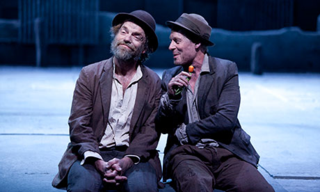 Hugo Weaving and Richard Roxburgh in Waiting for Godot

I've been waiting for Godot (sorry) to return to London for six years. Samuel Beckett's surreal, existential tragicomedy is a Marmite play, I know, but I think it's a great piece. It is a play that tests both actors and audience and one which always gives up something new.

This is a Sydney Theatre Production which is in residence at the Barbican for just over a week and sees Hugo Weaving take on Vladimir and Richard Roxburgh Estragon with Philip Quast as Pozzo and Luke Mullins as Lucky.

Their back drop are the walls of a what looks likes a former industrial building and yet there is proscenium arch of sorts which also looks likes a dressing room mirror frame with most of the bulbs around its perimeter either missing or broken. And of course there is the tree, just a long trunk disappearing off into the flies and one branch.

It is evocative of economic decay, the passing of good times and a reflection of ourselves and the human condition. The latter is an irony that is really brought to the fore in this production. It feels like the play is often poking fun at the audience; as Vladimir and Estragon entertain themselves to pass the time so we are similarly entertained. There is a bleakness and tragedy in everything but equally there is something very warm and comforting. This is a production with no half measures.

Review: #AlmeidaGreeks season kicks off with the emotionally charged Oresteia 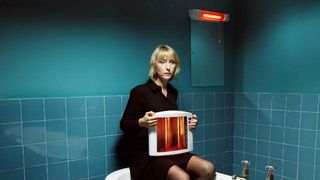 Each of the intervals during the three hours, forty minutes running time of the Almeida Theatre's Oresteia is announced as a break by the Chorus (Rudi Dharmalingam). We are instructed to return within the designated time or be refused admittance, and there are clocks counting down the minutes and seconds just to make sure you know.

It isn't as much of a gimmick as it first appears but part of a theatrical device that only becomes clear as the play progresses although it works brilliantly at getting everyone back in their seats for a prompt start.

The clocks are not the only way that director Robert Icke plays with time during this powerful production and neither is it the first time he plays with the audience.

Oresteia, the first in the Almeida's Greeks season, was originally three plays telling the story of Orestes (Luke Thompson) the son of Klytemnestra (Lia Williams) and Agamemnon (Angus Wright). In this adaptation by Icke he melts the three into one story but introduces elements that are usually told in other Greek tragedies. For example, rather than starting the play at the return of Agamemnon from the Trojan war he begins with the events leading up to his departure it helps put Klytemnestra and Orestes' behaviour into context.

In Icke's Oresteia what you get is the story of a family torn apart by faith and tragedy which raises questions about justice and revenge. Agamemnon's lands are threatened by war and he puts his faith in the Gods whom he believes have sent him a sign: He must kill his youngest daughter to ensure victory. It is an act he naturally agonises over: is the death of his treasured daughter worth it to save many other lives? It makes for a powerful, emotionally charged and disturbing first act and includes ones of the most distressing scenes I've watched in the theatre.

Was reading this interview with Michael Morpurgo, writer of National Theatre hit War Horse, and was struck by his reaction to first seeing the Joey puppet on stage:

"Amazed as was everybody else that a creature so obviously made had been filled with life."

I think it is the puppetry which has made War Horse such an enduring production and a global hit, and it is certainly what I remember most from my two visits to see it at the theatre. But his appearances aren't confined to the stage as he keeps popping up on special occasions.

He was on the roof at the National Theatre for the Queen's Jubilee celebrations and has had an official introduction to her Majesty, as well has appearing at West End Live at least once. I caught him arriving in his liveried horse box a couple of years ago. Does this make Joey a theatre icon?  He must certainly be the theatre equivalent to a 'national treasure'. 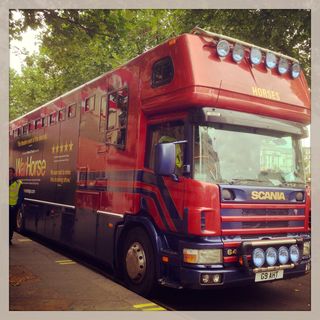 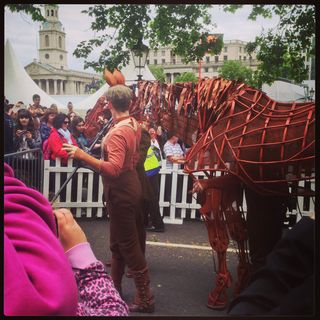 Theatre Hottie of the month: May

April was an embarrassment of riches when it came to stage hotties and, in contrast, May was strictly a tops on affair and a more select gathering. In fact it went to the wire (again) until Richard Southgate popped up (not literally) in Dogs of War at the Old Red Lion last Thursday.

Production shots don't really do him justice but trust me he's cute. 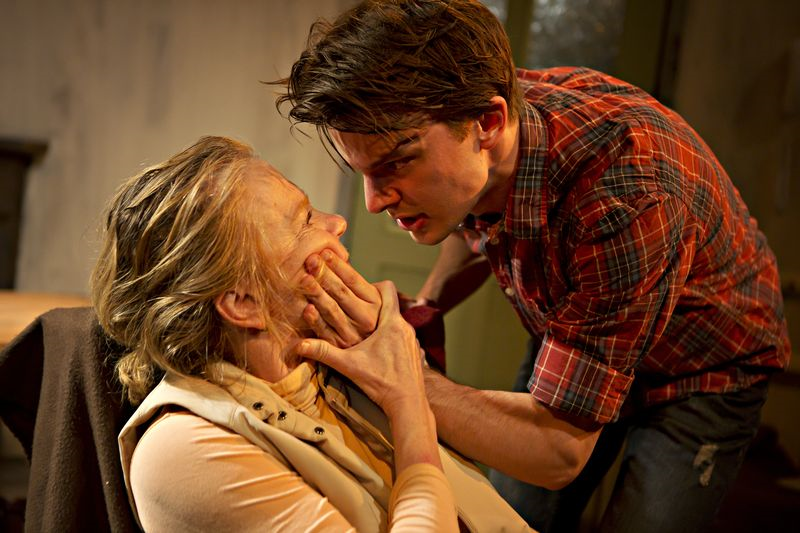 Richard Southgate in Dogs of War at the Old Red Lion. Photo by Pamela Raith