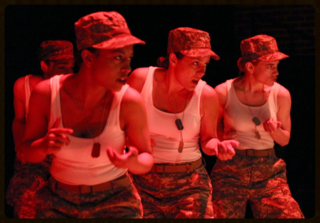 Imagine being sexually harassed on a daily basis. Imagine being threatened with the sack if you complain. Imagine not going to the toilet after dark for fear of being raped. Sounds like life in some sort of repressive, misogynistic regime doesn't it? This is, in fact, life in the US army for seven service women.

Helen Benedict's play, The Lonely Soldier Monologues, is adapted from her book which is a series of verbatim interviews with women who served in the US military on tours of Iraq and Afghanistan. There is much revealed in the play to get angry about. There is certainly plenty to be shocked by.

Actors tell the stories of the seven women using their own words, lifted from Benedict's interviews. Starting with why they signed up, to life away on tour and then what it was like when they returned. Most come from troubled, abusive or dysfunctional backgrounds and signing up is a chance of escape or at least to put their lives back on track. 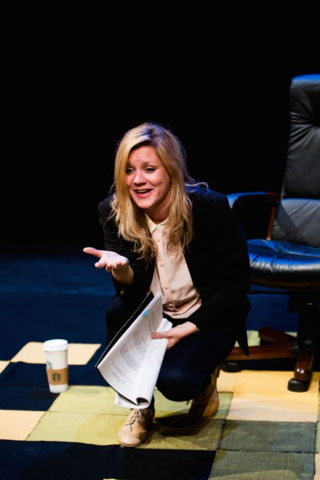 If the film Olivia Poulet's Leah is pitching to an actress had a movie poster it would be the sort that you'd run a mile from. Mark Ravenhill's satirical monologue is far more entertaining than the finished product ever would be or perhaps it would be a film so bad it would actually be good.

Leah thinks she has the perfect script for big actress Julia. She needs a big name actress to get the film green lit and Julia's career is on the wane:

And so for 50 minutes Leah talks Julia through the plot, re-anacting bits of the script, playing mood music, giving costume notes "You are wearing a gorgeous Versace suit, Versace are on board" and generally scene setting.

It is a cringe-worthy script which will be "hardened up" and a plot that is laced with female and racial stereotypes. Imagine Bridget Jones crossed with a bad Jason Statham action movie. Leah wants Julia to play the central character Amy, a successful, jet-setting woman living in a "beautiful warehouse apartment in East London that used to be an abattoir". Amy meets and falls in love with Mohammad, a Jihadist. Osama Bin Laden even makes an appearance. It's pure farce. It's cackle-inducing.

But this isn't just about the bad movie, it's about movie making as a commercial enterprise masquerading as an art form. And it's about Leah's increasingly desperate attempts to sell the movie. Leah peels off lists of inner monologues for particular scenes, breaking flow to mention how fantastic the lighting will be and body doubles. You can only imagine the look on Julia's face throughout.

It's a masterclass in acting from Poulet and, ironically, a level of talent which wouldn't even save this film from heading straight to DVD were it to be made.

Product is silly, ridiculous and sharp. It's a thoroughly entertaining 50 minutes. Catch it at the Arcola's Studio 2 until May 23 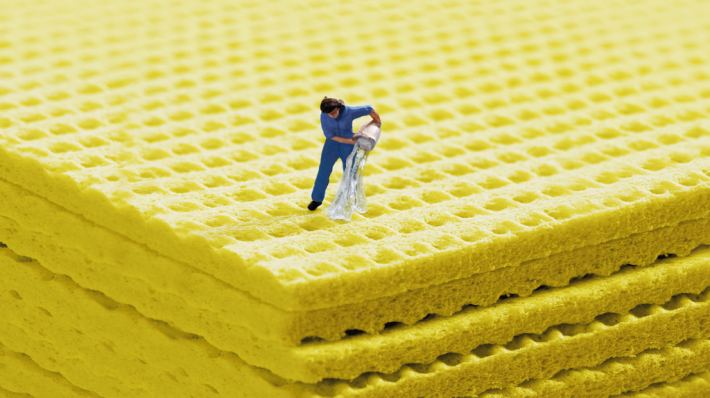 Beyond Caring is a curious play; curious in that it feels slow and, dare I say it, a little underwhelming while you are watching, but it is only afterwards when you realise how it has quietly got under your skin.

It's a Yard Theatre production written and directed Alexander Zeldin, and devised with the company, and is set in a sausage factory where three women have been employed on zero hour contracts to clean at night alongside full-timer Phil (Sean O'Callaghan). There is a lot of cleaning.

They are supervised by Ian (Luke Clarke) who pops in every now and again to assert his own brand of management on the team. But this is a play about strangers who find themselves in the same situation, working unsociable hours doing a job very few would do if they could avoid. You'd expect one of them to be chatty and loud but none of them are. There are long periods when nothing is spoken and they are getting on with cleaning, hence why it can feel a little slow; the communication and character revelations come from their body language and behaviour.

It's been a fruitful month of 'talented' talent. At first I thought Alex Hassell, playing Biff in Death of a Salesman, in his white vest and PJ bottoms would walk away with the title. He even made baby blue knitwear look sexy.

Then there was Jack Farthing playing a rent boy in Carmen Disruption who made me want to be a boy.

But then I went to see Cheek By Jowl's Russian Measure For Measure and, well, I was a little bit breathless and a little bit giggly by the end. So April's theatre hottie is Peter Rykov, the gorgeous Peter Rykov who played Claudio.

Here he is as Claudio making a double bass look sexy: