The Almeida's performance space has once again undergone a transformation this time to host Simon Stephen's new play Carmen Disruption.

Stalls ticket holders enter via the back of the stage, crossing a performance space strewn with rubble, a faded, red-velvet theatre seat and a bull which lies prone but breathing*. Two musicians play. The circle balconies take on the appearance of a faded, grand old theatre all reds and gold and on the brick wall at the back of the stage there is subtitle screen.

The names of characters from Bizet's famous opera are borrowed for four of the characters and together with 'The Singer' are connected only by geography, they all happen to be in the square in front of the opera house in Seville at the same time. Other links with the opera are thematic and musical rather than narrative or at least it appeared to me with my basic knowledge of the story.

There are two Carmens; one for appearances in the form of Victoria Vizin, who with the two musicians, acts as chorus and another who is a rent boy played by Jack Farthing.

Each of the characters tells snatches of their story. Carmen, for example, describes getting ready and going out on a 'date' which doesn't end well. Micaela (Katie West) has to dash across town to deliver an essay and recounts the sorry tale of a failed love affair. Don Jose (Noma Dumezweni) is a taxi driver with tough connections and a grim job to do and Escamillio (John Light) is a global trader pulling off a huge deal. The Singer (Sharon Small) is losing all sense of her self and seeks connection in the streets.

It is a play of atmosphere and impressions rather than simply plot. Where it succeeds is in being deeply sensual, passionate, brooding, rich and dark. The writing is at times poetic and its content grim as if Stephen's has lifted a stone and let selfishness, narcissism, neediness, lust and greed crawl out. And yet it is done with a dark beauty and with occasional wit and humour. 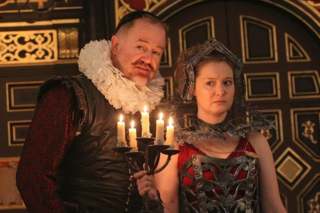 John Ford's more well known work is Tis Pity She's a Whore* and while that focused on the incestuous relationship between a brother and sister The Broken Heart is about brotherly betrayal.

Set in the court of the King of Sparta, Ithocles (Luke Thompson) stops his sister Penthea (Amy Morgan) marrying her betrothed Orgilus (Brian Ferguson) by marrying her off nobleman Bassanes (Owen Teale).

Later, having returned victorious from battle, and seeing how his sister suffers he has feelings of regret. He falls in love with Princess Calantha (Sarah MacRae) who is set to marry someone else. Meanwhile Orgilus, despite warnings, plots his revenge.

Director Caroline Steinbeis makes the most of the source material. She draws out the comedy as well as the passion and drama and the two hours and 45 minute running time (including interval) is peppered with some great moments however it is not until the plot threads start to come together that it really satisfies.

Owen Teale stands out as Bassanes, he's tyrannical, irrational and jealous and yet the performance just skirts the comic so that you don't know whether to be afraid or laugh, particularly when he is staring right at you from just two feet away.

Review: The RSC's Death of a Salesman with Antony Sher and Harriet Walter

There are lots of things that seem appropriate about the RSC staging a production of Arthur Miller's Death of a Salesman.

It is a play that is rich in ideas like Shakespeare's, is a grim as any of his tragedies and has at its heart dreams and illusions like some of his best plays.

Then there is the cast. Antony Sher who plays Willy Loman was last seen playing Falstaff in Henry IV*, a character steeped in his own illusions and dreams. Falstaff is part father figure, part rascally chum to Prince Hal who sees through him and rejects him. Alex Hassell played Prince Hal and in Death of a Salesman play's Willy's son Biff who ultimately rejects his father's principles.

And, like many of the themes of Shakespeare's plays, Death of a Salesman feels as pertinent today as when it was first performed in 1949.

Willy has been a salesman for thirty or so years, travelling far and wide. He believes that being liked is the key to success and yet has never quite attained the success he has dreamed about. He and his wife Linda (Harriet Walter) are getting close to paying off the mortgage on their house but times are tough and Willy isn't bringing in as much commission as he once was.

His elder son Biff has returned home having been working as a farm hand and there are tensions between father and son which Linda is constantly trying to sooth. Happy (Sam Marks) is the younger son and has gone into business and believes a big promotion is just around the corner.

Willy has started talking to himself and these form a series of flashbacks through which we learn of the family's past, how Biff was the apple of his father's eye and going to do great things but then something went wrong.

Continue reading "Review: The RSC's Death of a Salesman with Antony Sher and Harriet Walter" » 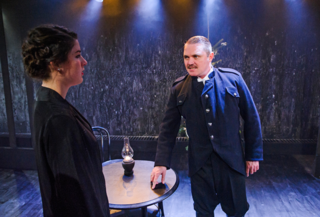 When August Strindberg wrote The Father he was going through marital problems and boy do they show in this tug of love play about two parents fighting over their daughter's education. There's a bit more to it than that, of course, but that is what kicks things off.

Captain (Eastenders' Alex Ferns) is a military officer and scientist and lives in a house with his wife Laura (Emily Dobbs), daughter Bertha (Millie Thew) and nanny (June Watson) together with an unseen nurse and mother-in-law.

He wants to send Bertha to live with a family in town for her education and also to get her away from the influence of the women in the house who have differing religious beliefs. Captain himself is an atheist.

Demonstrating his rights as a father, and the lack of those for Laura as his wife and a mother, he tells her that Bertha is going to be sent away.

Laura uses the only things available to her, her wile and cunning to prevent the plans. She plants seeds of doubt in the Captain's mind about Bertha's paternity and begins to spread rumours about his mental health. Strindberg himself was to suffer from some sort of mental breakdown resulting in hospitalisation just a few years after writing The Father.

So this isn't just a battle about parents who disagree but a battle between the sexes in a misogynistic society and a battle for sanity. Getting Captain sectioned is a cunning move, as he points out to his wife, she needs him alive in order to maintain her lifestyle. (Interesting that this has been programmed at the same time as The Ruling Class on the main stage which is also about getting someone sectioned.) 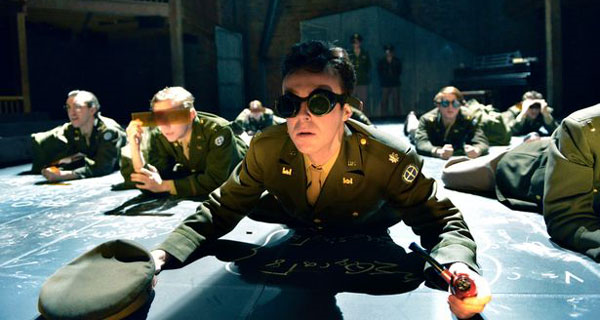 J Robert 'Oppy' Oppenheimer (John Hefferenan), the father of the atomic bomb, is gregarious, a lover of women, leans politically towards the communist party and is highly driven by his work.

This is a multi-layered play about science, academia, politics and humanity and Oppy has to grapple with them all.

The play starts pre-war with Oppy as a lecturer with political leanings. A man who likes to socialise, has a lover and hangs out with card holding members of the communist party. When the war begins to rage he is employed by the Government to work on a bomb that could bring things to an end. Ensconced on a secret military encampment in New Mexico with the sole purpose of developing the weapon with a team of fellow academics, he comes under scrutiny and suspicion over his politics.

Holborn fire: find out which West End theatres are affected

The Official Theatre website has published a handy guide to where the show is going on and where it isn't for those theatres near the Holborn fire. You can check out which shows have been cancelled and which are going ahead here.