The Old Vic Theatre has a rather large and impressive tree on its round stage. On the floor beneath it a road is marked out with white tape (and the word 'ROAD' just in case you were unsure) and there are also squares marking imaginary tree stumps.

Tim Key arrives with a cool box and a small ruck sack. He's meeting 'Sarah' for a picnic date underneath the tree but he's got the time mixed up, forgotten the clocks went back. Then he notices Daniel Kitson up the tree. Over an hour and a half the two men tease out each other's stories - the back ground to the date and why up a tree. They are amusingly told, often filled with banter, teasing and incredulity.

The picnic is set out during the conversation - very ordinary yet pertinent fare which is served with a particular flourish - and Kitson stays up the tree. 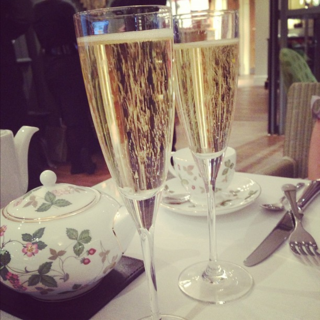 It was a year in which I was spat on, splattered with blood and humiliated - the things we audience members have to go through when watching a play. It was also the year of the dog with not one but two scene-stealing canine appearances (Two Gentlemen of Verona and Shakespeare in Love) and then, on my final theatre visit of the year, the 'ahhh-factor' ratcheted up a notch with a kitten stealing the show in Elephants. A kitten, yes. Actors don't bother speaking when there is a kitten on the stage, no one is listening.

But back to the matter in hand, yes, it is that time of year again; a time to honour and reflect on those moments that made up 2014's theatre highlights. And, a time to feel aghast all over again at some of the lowlights.

The long and short of it award

Down on the South Bank the Young Vic was having a little competition with itself over running times. Bam it hits us with a lithe, 2-hours straight-through A View From the Bridge then, pow, it counters that with a three hours 40 minutes Streetcar Named Desire. Maybe the latter was to stick one in the eye of neighbour Old Vic which at the time was running The Crucible at a good three and half hours long. I'd normally go for quality over quantity but for once the long plays got away with it.

Best use of a song

Last year was particularly notable for the use songs during plays (I'm not talking musicals). Lorde's Royals got used at the end of Charles III and then again during one of the James plays.

And I'm still haunted by the brilliant use of Chris Isaak's Wicked Game during Streetcar Named Desire. It's an ambiguous song in that it's not quite as romantic as the lyrics may initially imply. It was an ambiguity that worked perfectly for the sexually charged moment between Gillian Anderson's Blanche and Ben Foster's Stanley.

But neither of those songs gets the award, nope, it goes to David Bowie's Starman played during My Night With Reg. I'll never be able to listen to that song again without it conjuring up the bitter sweet 'dance' in Guy's flat. It was a laugh or cry moment and the song captured it perfectly.

Curtain call, the moment when actors float somewhere between their character and themselves; the moment of relief, jubilation, pride and perhaps regret. It is at this brief juncture between performance and dressing room that a myriad of emotions can erupt into something amusing or quite telling.

I love the curtain call moment for the unexpected, the awkwardness (how much should you look at any one actor?) and its simple joy. For those reasons it's become a category in my StOlivier awards in previous years - 2014's are currently being deliberated - but there was such a good measure of memorable moments, I thought they should get their very own blog post.

Theatre review 2014: It was a vintage year and this is my big best of list

Well I think we can safely say 2014 was a vintage year for theatre, just so many highlights. In June when I did a quick tally there were more than 10 potential contenders for my 'best of' list and the year just got better.

I've also seen more this year probably around 15-20 more plays than last year which has meant a bigger pool to choose from. I've already published my favourite Shakespeare's and favourite fringe lists but this is the biggy, my overall favourites from everything I've seen. These are the plays that, for me, had the most impact, left the biggest impression or were just pure unadulterated fun.

So in no particular order:

1. The Pass, Royal Court Upstairs A sharp and witty play that put fame under the spotlight and who couldn't enjoy Russell Tovey and Gary Carr running around in their Calvin Kleins. Had to have a second look of this one.

2. Good People, Noel Coward Theatre Imelda Staunton gave a tour de force performance as the fast talking Margaret in a funny and beautifully observed play that examined opportunity vs circumstance in light of the American Dream.

3. Charles III, Almeida Theatre Mike Bartlett channelled Shakespeare in this extremely clever and funny new play that imagined what Prince Charles would be like as King. It's now playing in the West End so go and see it.

4. A View From The Bridge, Young Vic This stripped back version of Arthur Miller's classic pushed the complex emotional conflicts of its key characters to the fore. It was tense and powerful and another play I had to see twice. Look out for the West End transfer this year although I don't think a huge West End stage will quite deliver the same impact - it was staged as a thrust with audience on three sides at the YV.

Continue reading "Theatre review 2014: It was a vintage year and this is my big best of list" »

Theatre review 2014: My favourite fringe productions and my fringe star

2014 was a cracking year for fringe productions, particularly new writing. Popular themes were deprivation and the break down of society but often delivered with a spark of hope in humanity and a dollop of humour. Sometimes you had to look hard to see the hope but it was there.

Alex Waldmann gets my fringe star award for appearing in two productions I loved this year, Jonah and Otto made it onto the list below and Widowers Houses gets an honourable mention.

There are a handful of fringe productions that are making an appearance on my overall best of list which I'll be publishing later today but I haven't included them here so as to make more room for more productions I loved. What can I say, its was a quality year.

In no particular order:

1. Pests, Royal Court Upstairs This was urban poetry, fresh and urgent and had a lot to say about how society is failing the young.