Review: Rupert Goold's gambles on his Las Vegas set Merchant of Venice at the Almeida 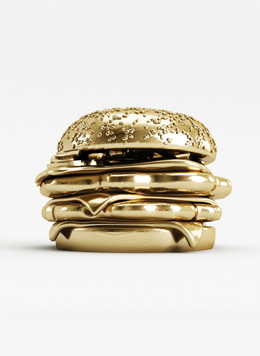 It's all Elvis impersonators, slot machines and dancing girls in Rupert Goold's lively and colourful production of The Merchant of Venice. He originally directed this production for the RSC in Stratford in 2011 but with a few staging adjustments to fit onto the trimmer Almeida stage and some new cast members it arrives in London for a two and a bit month run.

The Stratford production had me conflicted. On the one hand there are some achingly clever devices and interpretations but on the other the 'in your face' tone and American accents made it difficult for a Merchant novice, as I was, to understand what was going on. I hoped this second viewing, now being more familiar with the story, would open up the play a bit more.

Ian McDiarmid steps into Patrick Stewart's shoes as Shylock the Jewish money lender with a macabre idea for a bond on a loan to Antonio (Scott Handy) and his is initially a much more playful Shylock who relishes what he thinks is a clever deal.

Susannah Fielding and Emily Plumtree return as the rich single lady Portia and her maid Nerissa and it is the treatment of their story which remains the highlight for me. Portia's father has left any potential suitors, all of whom have to be rich, with a choice of three boxes to open. One box has a picture of Portia in it to indicate they have chosen correctly and each box has an inscription in order to help them to decide which is the correct one. Goold uses a TV game show format, a cross between Deal or No Deal and Blind Date. 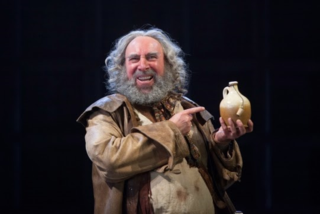 It is fathers, sons and frolics as Greg Doran turns his hand to the two part story of Henry IV and the future Henry V. And it is all about personal and public appearances.

Prince Hal (Alex Hassell) enjoys a wild life in London's less salubrious hang outs with a gang of the less than gentile headed by Sir John Falstaff (Antony Sher). But responsibility and princely duty nags at him to reform as civil war threatens his father's kingdom and he plots, albeit naively, an impressive turnaround.

He contrasts starkly with Harry Hotspur (Trevor White) the son of the Duke of Northumberland who takes his duty seriously, fighting heroically but in a way is too honest. He cannot deviate from his inherent irascible nature, temper his hot-headedness which is something that ultimate betrays him.

Meanwhile Falstaff just lives in a world of charming denial and playful lies to suit whichever circumstance he finds himself in. He is one of those characters that light up the stage, Sher's throaty, red-cheeked, never-rushed portrayal one that you just enjoy spending time watching.

Was talking to a fellow audience member in the queue for the loo at the interval; English wasn't her first language but Piranha Heights was her first play. She wanted to experience British theatre. She'll have certainly got an experience.

Philip Ridley is unique among modern playwrights for his ability to poetically mix gritty realism with fantasy and horror in a style that is inevitably unsettling. His scripts are visual and productions often physical and muscular and this revival of Piranha Heights is no exception.

Brothers Alan (Alex Lowe) and Terry (Phil Cheadle) are meeting in the housing association flat of their recently deceased mother to decide who is entitled to what from their mother's belongings and, most importantly, who gets the flat.

Nothing is straight forward with Ridley though. There is always something in the characters history or in the present that isn't quite right, often a little bit sinister or uncomfortably strange and sometimes downright shocking. You can almost guarantee that something or someone will not be quite as they initially appear.

Review: Austerity under the spotlight in Hope at the Royal Court During the interval of Jack Thorne's latest play Hope @polyg and I were discussing how the play posed an impossible question. The fictional town council at the heart of the story is setting its budget. It must make substantial savings but doesn't have the means to generate extra income in the amounts necessary to compensate.

The councillors are faced with impossible questions of whether to cut such services as disabled day care or residential care for the elderly. Do they close the library and keep the museum open or cut classes and swim lessons at the local baths? Trimming a few quid here and there isn't going to get the numbers they require.

The baddie in this is not on stage, its central Government. It would have been easy to slip into stereotype, show a council full of bluff and a history of reckless spending. Instead these are committed and essentially good people faced with making decisions that will impact on some of the most vulnerable and in need. This is austerity.

Continue reading "Review: Austerity under the spotlight in Hope at the Royal Court" »