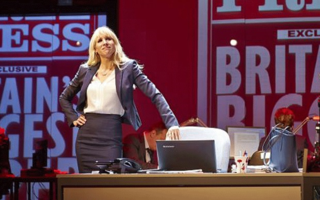 Richard Bean's sharply satirical and blackest of black comedies arrives in the West End this week having enjoyed a successful debut on the South Bank at the National Theatre.

There are a few cast changes, most notably Lucy Punch taking over from Billie Piper as Paige Britain and Ben Mansfield replaces Oliver Chris as the ambitious assistant chief constable Donald Doyle Davidson. The other notable change is the running time which has been trimmed back by at least 15 minutes so that it comes down at 10pm (not 2 hrs 45 as it says on the website).

Based on the phone hacking scandal Great Britain follows ambitious tabloid news editor Paige Britain as she manipulates a press hungry Prime Minister and police commissioner to get what she and her news conglomerate boss want while exploiting c-list celebrities along the way.

Paige makes the audience complicit in her immoral tactics remorselessly justifying not only the means but also the end results. It is a device that is echoed in one of the plays central messages that as consumer of media we are ourselves in some way to blame. It is part of the black edge this play has. Yes at times it is farcical and wry and satirical but the humour isn't always comfortable.