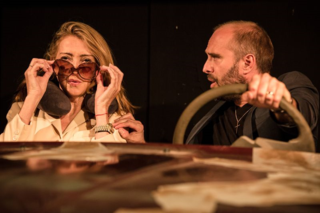 Neil LaBute has knack for highlighting the more dislikeable and sometimes downright sinister side of human nature and in Autobahn - making its London premiere - we are treated to seven short plays to make the point.

Each 'playlet' is set in a car, sometimes parked, sometimes on a journey which as a device serves to heighten the tensions in the conversations that are played out. The stories alternate between a one-sided conversation, a monologue in essence and then something more conversational. A cast of four - Zoe Swenson-Graham, Sharon Maughan, Tom Slatter and Henry Everett - take on the twelve parts.

LaBute doesn't like to give the audience anything up front, the effect is a narrative strip tease leaving you with two characters that don't quite look how you first imagined.  And it is in doing this that the grubbier side of humanity is revealed, from the husband who calls his wife a 'c*nt' in public, the girl who sent dead animals to an ex-boyfriend and the friend who puts his own needs ahead of those of his recently jilted mate. 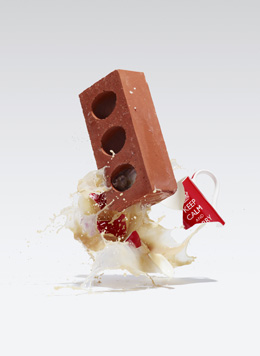 [Had a bit of a tidy up and added some additional thoughts] Verbatim plays have come into vogue in recent years but this is actually the first I've seen (cue: incredulous comments about things I've missed) so I'm coming to this experience 'fresh'.

During the 2011 riots - sparked by the shooting of Mark Duggan - writer Alecky Blythe took her dictaphone to Hackney.  She talked to people affected by the riots and followed the community campaign that sprang up to support local convenience store owner Siva Kandiah whose shop was looted.

Alecky appears in the play as herself. The actors all wear ear pieces and are fed the lines of the different characters they play which they then recreate.

The Almeida has been transformed for this production with the stage and seating moved into the round*. There is a temporary feel to everything with chip board and industrial looking railings to protect those sitting in raised seating as if the theatre has been patched up post the riots.

In the central performance space it is community centre style chairs and random raised platforms with the actors often staying on stage or in seats within the audience. At the beginning we are told by Alecky that the actors are hearing the voices of those they are playing and the whole thing is set up as a meeting of people who want to be...in her play. It is device that is never returned to.

The narrative is told through a selection of encounters Alecky had and we see a mixture of responses to the events. There are the well-meaning middle-class residents who set up a fund for Siva and organise an afternoon tea party, sponsored by M&S, in order to bring the community together.

Then there are the residents of the local Pembury Estate who see the social issues that caused the riots as something different, not about eating cupcakes but addressing things like stop and search and various other policing techniques designed supposedly to suppress criminal activity among the local youth.

Back in the theatre saddle and a new banner

My summer recess from theatre ends tonight. A whole week without seeing anything but not only am I back in the theatre saddle (Little Revolution at the Almeida) but I'm also back with an updated banner for the blog. It's something I've been planning for a while as I've seen so many fabulous plays since the original was made nearly four years ago.

It's been fun going through all my tickets and reminiscing about some great plays, some not so great and and trying to remember the less memorable. And, it was really tricky narrowing my choice of tickets to feature. Do I go for my favourites or the most recent or the most varied? Well it turned out to be a bit of all of those things together with some aesthetic considerations.

The toughest decision was between the tickets for the Young Vic's Streetcar and A View From the Bridge. In the end the former won out purely because of the way the title of the play was set on the ticket. (Sorry View From.)

Had to get a Hamlet on there too as it's my favourite play and it was a really good fringe production at the Riverside Studios. Mr W naturally had to make an appearance and there was a choice but Mojo was always going to walk that one.

As it turned out once I'd chosen my tickets getting them positioned correctly for the frame of the shot was by far the most difficult part of the task. The number of times I got the shot taken, edited and ready to upload only to realise that Hamlet or Mojo had slipped behind another ticket or Sweet Bird of Youth was cropped out. It's far harder than it looks but I'm quite happy with the result, what do you think? 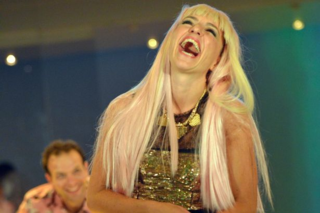 David Sturzaker and Kirsty Bushell in RSC's The White Devil

Contemporary settings, modern beats, graphic murders and racy love scenes have become common features of RSC productions in recent years. And its great, giving the Shakespeare and Jacobean plays a vitality, freshness and youth that they probably had when they were first performed, before it all became a bit high-brow and any interference or irreverence was sacrilege.

The slight problem is that it has raised expectations and I think this might have tempered my enjoyment of The White Devil yesterday. It was good - slickly done and performed - but there was something missing. Discussing it on the train back to London with @polyg and @nick730 the consensus seemed to be that it lacked a certain flourish.

It does make the job of reviewing it slightly tricky. It is easier to write about what did and didn't work rather than trying to put your finger on what it didn't quite have.

The White Devil is a classic Webster revenge tragedy. An affair between Vittoria (Kirsty Bushell) and  Duke Bracciano (David Sturzaker) creates scandal among the nobility as both are married. Vittoria's husband Camillo (Keir Charles) is nephew to a powerful Cardinal and papal candidate. Bracciano's wife Isabella (Faye Castelow) is the sister of the Duke of Florence.

The society the two lovers move in is already deeply spoilt and corrupted; noblemen murderers are banished rather than sentenced to death. Murder has become a currency to get what you want and if it can be carried out with an element of theatre then all the better.

And, we are sitting on the front row so maybe, just maybe, this will be the time there is a teeny bit of blood splatter (I've already been spat on by an RSC actor this year). If not tomorrow, then my back up is a front row seat in the designated splatter zone for Richard III at Trafalgar Studios on Monday.

Review: Fun and silliness in The Diary of a Nobody, King's Head Theatre 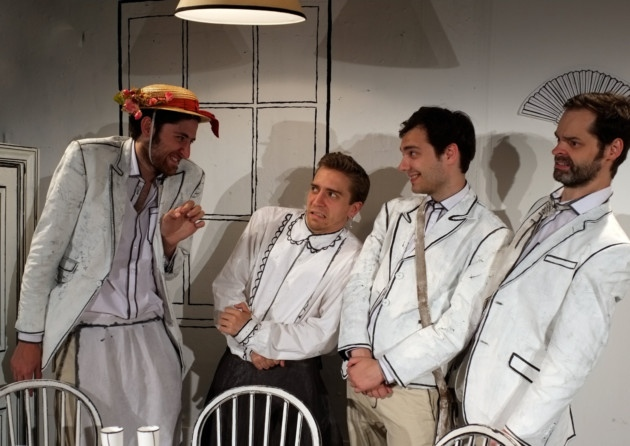 Fringe theatre is at its best when it is doing something different and creative. And Mary Franklin's adaptation of the classic 19th century comic novel The Diary of a Nobody is a great example.

The 'Nobody' is Charles Pooter, a City of London clerk living in Holloway with his wife Carrie and their servant Sarah. Their grown up son William is working in Oldham. As in the novel the play follows Pooter's diary for 15 months, the trials and tribulations of an ordinary life told with extraordinarily chaotic and farcical fun.

Carin Nakanishi's design is illustrative as if from the pages of the book. The Pooter's front room is drawn in black on a white background and the casts costumes match. Four actors take on all the roles of Pooter family, friends, acquaintances and colleagues, the humour often drawn from the rapid changes, quick disappearances and mysterious absences of particular characters.

Continue reading "Review: Fun and silliness in The Diary of a Nobody, King's Head Theatre" » 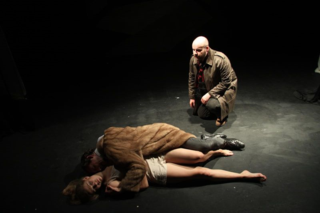 Lucy Laing as the Duchess, Tom Blyth as Ferdinand and Stephen MacNeice as Bosola

Webster's dark tragedy of brotherly lust and revenge is a favourite of mine. It's got some great characters - the good, the flawed and the out and out bad. It has love, duplicity, madness and murder. Plenty to entertain.

Pell Mell's production is simply staged with a series of curtains dividing the stage at appropriate points and the very bare minimum of props - some cushions and throws on the floor for a bed chamber and a pole with a couple of chains for a prison. Nothing to distract you from the story of the young widowed Duchess of Malfi (Lucy Laing) who defies her brothers request not to marry by attaching herself to her steward Antonio (Callum Cameron) and having a child with him.

The Duchess is an interesting character. She's done her duty in the past and wants to use her new found freedom to marry whom she chooses but falls foul of the male-dominated world and in particular her jealous and obsessive twin Ferdinand (Tom Blyth).

Laing's Duchess is a little too capricious and lacking in charm to fully empathise with her situation. She was probably at her best in the bedchamber scene with Antonio where there was a nice relaxed playfulness between husband and wife which did make what follows more difficult to bear, in a good way. 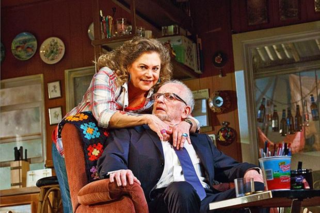 Fantastic to get the chance to see a Hollywood acting legend like Kathleen Tuner on the West End stage and opposite Star Wars' Emporer Ian McDiarmid to boot.

Bakersfield Mist is inspired by true events and sees snobby, upper-crust art expert Lionel (McDiarmid) flying to Bakersfield, California, to determine whether the thrift-store painting bought by unemployed barmaid Maud (Turner) is a genuine Pollock as she claims.

The authenticity of the painting is important but not really the crux of the play. Maud and Lionel are chalk and a cheese in almost every sense except they are both firebrands. Maud is passionate about proving the painting is a Pollock for reasons that go beyond the money it might yield. For Lionel art is his life and passion, he is extremely knowledgeable but that manifests itself in a superior, self-satisfied and patronising manner.

As you'd expect the two don't immediately hit it off but at the end of the visit and after working their way through a bottle of Jack Daniels they have both discovered something about art, themselves and each other.

Review: The beautifully bittersweet My Night With Reg at the Donmar Warehouse 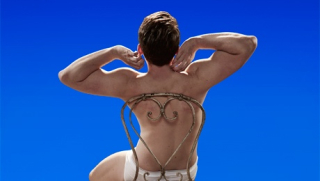 It's the 20th anniversary of Kevin Elyot's gay comedy My Night With Reg and while medical science has subsequently made huge leaps in the treatment of Aids this production hasn't lost any of its bittersweet edge.

Set in the flat of Guy (Jonathan Broadbent) the play follows the lives, loves and affairs of a group of gay friends over several years as they adjust to life and the spectre of Aids. The eponymous 'Reg' is like Godot in Samuel Beckett's play Waiting for Godot, never seen but pivotal to the plot.

Guy is the cuddly, affable one and the least successful in love mainly because he has held a torch for John (Julian Ovenden) since they were students. John oozes charm and charisma, is independently wealthy and unable to settle down, disappearing for months sometimes years on end until he falls for the wrong person.

Daniel (Geoffrey Streatfeild) and John were best friends at University, swapping lovers and easily falling back into old jokes and teasing when they meet up. Daniel has subsequently settled down with Reg. The group is completed with Eric (Lewis Reeves) a young Brummie barman at the local gay pub and Benny and Bernie (Matt Bardock and Richard Cant) a bickering couple for whom domestic bliss suits one more than the other.

Continue reading "Review: The beautifully bittersweet My Night With Reg at the Donmar Warehouse" »