Review: Mark Strong in A View From The Bridge at the Young Vic 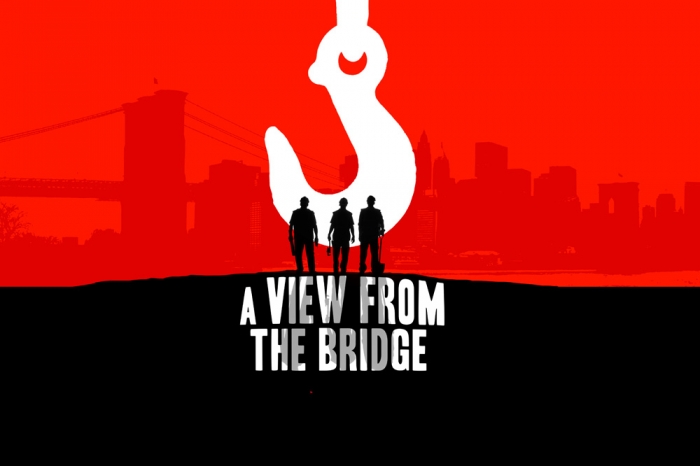 Ivo van Hove directs Mark Strong in a stripped back production of Arthur Miller's classic play A View From the Bridge at the Young Vic. The script has been trimmed to two hours straight through and the stage is a stark, under lit pit - like a light-box - with clear-walled benches at its perimeter.

The lawyer and narrator Alfieri (Michael Gould) stalks the area between the stage and audience, his presence a reminder of his warnings of what is to come.

It concentrates the attention purely on the performances which are shot through with a sexual tension unlike I've experienced before in watching the play. Phoebe Fox's Catherine is a beautifully observed confusion of childlike behaviour and desire to grow up. She's not quite ready to relinquish the little girl relationship she has with her uncle Eddie (Mark Strong) and is just beginning to understand the power of her sexuality.

Mark Strong's Eddie is equally complex. He isn't ready either to give up that adult/child relationship and is possessively protective but there is something that isn't quite parental in his caresses and cuddles which is uneasy to watch. As Catherine's relationship with illegal immigrant Rodolpho (Luke Norris) develops there is a violent and panicked battle going on inside Eddie. It adds to the growing tension of the piece and feeling of discomfort, the pregnant pauses grow culminating in his violating Catherine with a kiss on the mouth and then much worse.

Continue reading "Review: Mark Strong in A View From The Bridge at the Young Vic" »

This production of Chekhov's Three Sisters is a version by Anya Reiss who has modernised the language and placed the sisters in a British enclave, in an unnamed Middle Eastern country, from where the British army is about to withdraw. The characters have mobile phones and iPads and rather than wanting to return to Moscow the sisters want to return to London.

The problem with going down this path is one of context. The basic premise of Chekhov's play is that the three woman are trapped in a man's world, unable to fulfil their desires and return home because they can't do so without their brother Andrei. Those constraints just don't exist in this modern context and the production just reminded me of that fact all the way through.

In the same way that my inner voice is screaming "just sell the friggin' cherry orchard" in this I just wanted to yell: "get onto Expedia and book yourself a flight". And in the same context would Masha stay with her husband whom she resents?

Stuck in a place they don't want to be the three sisters and their army friends philosophise on their place in society, their worth and happiness. However, all this got clouded by the modernity of the setting and considering its trimmed running time - 2 hours 10 including interval - it felt a little slow and stodgy. 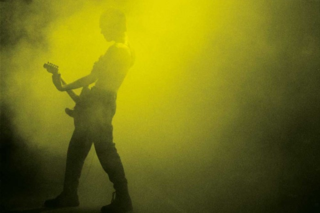 Birdland is a night of rock stars for this theatre fan and @Polyg too I imagine. You see Simon Stephens is a rock star playwright for us and Andrew Scott is a rock star actor and the play is about a rock star.

Andrew Scott plays Paul who's playing to crowds of 75,000. He's reaching the end of a 15 month world tour where one country and hotel blends into another and there seems to be only two states of being: performing and waiting to perform.

Paul hasn't so much been corrupted by fame as badly tainted by it.

"I walk into a room. Far more people know who I am than I could possible know and after a while that does start to get a little disorientating."

He's a cash cow for so many people it's got to the stage where they won't refuse him anything and that money and influence is corrosive. He's living a surreal life and losing his grip on the real world. Money means nothing anymore other than being his answer to everything. Buy something to make himself feel empowered, buy things for others to make them feel better or like him or to impress. Buy things because he can and what else is there to do in between gig?

There are drugs and alcohol too - always the best and purest of course - but these are just part of the landscape.

Paul is a cock. Actually he's something stronger than that and he does admit it a couple of times when he manages to pull back to himself for a moment. The adulation and constant attention has made it difficult for him to make social and moral judgements. He is offensive and destructive when it comes to relationships and friendships.

Review: The disappointing A Small Family Business at the National Theatre 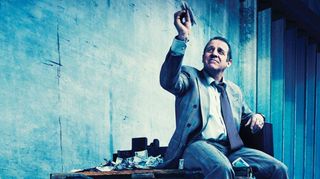 Sometimes revivals of old farces can work if there is enough silliness, humour and pace to entertain. Unfortunately the National Theatre's revival of A Small Family Business is not anywhere near as 'riotous' as it is described on the website.

Alan Ayckbourn's 1980s comedy about an honest man - Jack McCracken (Nigel Lindsay) - who joins the family firm only to find out that almost everyone has their hand, metaphorically, in the till never really rises much above a lame TV sitcom. In fact I was more fascinated/alarmed by the garish 80s dresses the female characters were wearing.

Even the great performances can do nothing to hide the predictable plot and stereotypical characters, some of whom were probably funny 20 or so years ago. Aside from a just a handful of laughs it doesn't really rise much above mildly amusing for its two hours and 40 minute  running time (including interval).

Continue reading "Review: The disappointing A Small Family Business at the National Theatre" »

Review: The urban poetry of Pests at the Royal Court 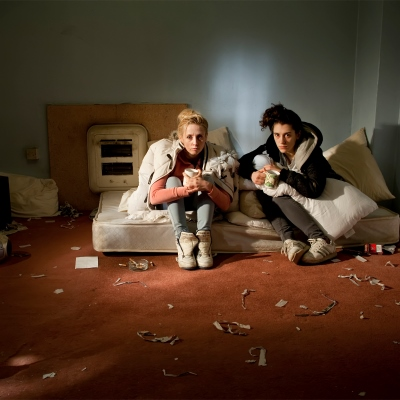 Sinéad Matthews and Ellie Kendrick in Pests - taken for the Royal Exchange, Manchester production where Pests premiered before transferring to the Royal Court

As usual it falls to one of my theatre friends, this time @pcchan1981 to make the most pertinent comment about a play we've just seen. As we left the Royal Court's upstairs theatre he said of Pests: "This is what teenagers should be watching, not Other Desert Cities."

I didn't have to sit amongst a group of bored teenagers during the Old Vic's current play to which he was referring but I whole-heartedly agree. Bruntwood prize-winner Vivienne Franzmann's latest play is refreshingly contemporary written in a London street patois that makes it grimly poetic as well as giving it an urban currency.

Rolly (Ellie Kendrick) has just got out of prison, is pregnant and off drugs at present. She turns to sister Pink (Sinéad Matthews) for somewhere to live. Pink is a heroin addict funding her habit with petty crime and occasionally prostitution. Rolly has a job interview at a hotel which helps ex-cons into a new life. This could be a new start.

The two have a strong sisterly bond despite being separated for a time when they were in care. They have little else to identify with but it is a bond that ties them not only to each other but to a life they would like to leave. Failed by most adults they have been abused and abandoned by society and left to rot on its sidelines, surviving the only way they know how: get money, get drugs, get high. It leaves only a little time to daydream of a different life in between.

Continue reading "Review: The urban poetry of Pests at the Royal Court" »