Kind of ironic that there is a trailer for the Royal Court's new play Let The Right One In when it most likely owes its existence to the 2008 Swedish film adaption of the John Ajvide Lindqvist novel. (And it is actually quite a good trailer, for once, see for yourself below.)

I loved the film to the point where I refused to see the 2010 English language remake (renamed Let Me In) as I couldn't see how it could be bettered or the chill atmosphere of the Swedish landscape recreated. So I'm both curious and nervous about how it is being produced on the stage.

Let the Right One In is a vampire love story that is a real departure from the usual teenage, hormone-laden versions that have proliferated TV and cinema screens in recent years primarily because the protagonists are children. The actors that played the leads, Eli and Oskar, in the film gave beautifully understated performances and had a quiet and innocent reflection about them which made the occasional scenes of bloody violence all the more affecting.

They were 12/13 years old when they made the film and I worry about whether the inevitably older stage actors will be able to capture that innocence. If they do, it could be cracking.

No doubt there are devices unique to theatre that can be employed to recreate the atmosphere of a gothic thriller and that is certainly something I'm equally curious about. Hopefully I'll get the chance to find out whether they have pulled it off on Monday, day seat tickets permitting.

It's difficult to describe quite what sort of entertainment the Blue Man Group is. They don't speak. They drum a bit, sometimes on instruments made of plastic piping. They make art and sound with paint and food. They play around with lights, shadows and other visual tricks. And, they are blue.
It is a unique sort of cabaret made quirky by the performers who have the curiosity and playfulness of children encouraged by attention with the occasional knowingness of adults. The blue paint also gives them an other-world appearance. It is charming and disconcerting at the same time.
If you are sat in one of the front rows you are given a poncho as you are in the 'splash zone' and if you are late, well everyone will know what you look like. This is interactive entertainment with no fourth wall and a finale that can't but help get everyone in the party spirit (and up from their seats).
This is family fun - assuming the later evening show in a Friday is the same as the 6pm I saw - and as such is harmless and unusual fun.
Afterwards there is the chance to meet some of the Group, if that's your thing.
Good holiday entertainment.

If Mojo was performed by women who would you cast?

This came up in conversation in the day seat queue and it really got me thinking. We decided that you'd have to update the setting to something more contemporary but other than that you wouldn't have to change much. Here is my casting:

What the critics thought of Rupert Grint, Colin Morgan and Ben Whishaw 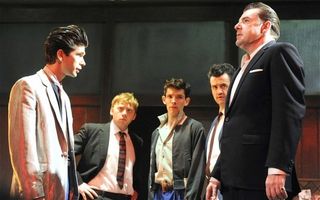 You can read the What's On Stage review round up of Mojo here - most critics have given four or five stars - but what did the critics say our leading boys? It is Rupert and Ben that seem to garner the most comments:

"Daniel Mays and Rupert Grint are the jumpy, insecure sidekicks in the club, the first a non-stop jittery bugger with a hilarious line in feeble self-assertion, the other – in a more than competent stage debut – a moon-faced, slow-thinking foil who finds himself retching without any sick." What's on Stage

"Rupert Grint makes an assured stage debut as Sweets, a pill-popping, pill-dealing kid with a hollow confidence. His opening dialogue with Daniel Mays’s garrulous, sweaty Potts is played out at a beguilingly brisk comic pitch.." The Times

"Distancing himself from his alter-ego, Ron Weasley, the Harry Potter actor has chosen to make his stage debut, and a new start, with an edgy role.

It’s a formula tried and tested by his co-star Daniel Radcliffe, who went from heroic Harry to nude heart-throb when he starred in Equus in 2007.

Still, it’s a shock to see the loveable Ron as Sweets, a pill-popping member of London’s 50s underworld.

Almost as surprising is just how natural and convincing he is, showing great comic timing and delivery throughout." The Mirror

"Grint also shows his growing maturity as a performer as his much dimmer, but no less frightened, pal..." The Stage

"Colin Morgan is both wonderfully funny and desperately poignant as the club’s dim-witted cloakroom attendant." The Telegraph

"Morgan (spoiler alert) does one of the best death scenes I’ve ever seen." Daily Express

"Colin Morgan’s Skinny is a tragic, bullied study in human weakness, his final demise played with skill, precision and pathos." The Stage

"...there is a superb performance from Whishaw, who brings a drop-dead arrogance and a chilling touch of the psycho to the late club-owner’s abused son, Baby." The Telegraph

"Ben Whishaw as Baby radiates a toxic stillness, yet never lets you forget that the character is a victim of paternal abuse." The Guardian

"Oh yes. And Ben Whishaw (Q from Skyfall) as Ezra’s son, Baby, is the heart of it. He is sinewy, unnervingly still, angry, unpredictable. Cool to the point of crazy. He reacts to his father’s death with nagging chat about how Colin Morgan’s cadaverous Skinny has nicked his fashion sense. You dread what is really inside him.

Whishaw handles Baby’s dry wit — “There’s nothing like someone cutting your dad in two to clear your mind” — without resorting to off-the-peg psycho glibness. By the end, he is crying one second, bursting into song the next. It’s a performance far outside of his usual range, one that reminds us just how versatile an actor he is." The Times

"Ben Whishaw (once a pretty formidable Dane) offers up a Hamletesque portrait of Baby, savvy enough to play his new situation with an antic disposition but allowing the deep pain and fear to emerge subtly and incrementally. His father, we soon learn, sexually abused him, but this is a world that cannot afford any pity (his “type think the world owes them a trip to the zoo” as Potts puts it). Appropriately enough, Whishaw’s performance hovers perfectly between wounded vulnerability and a frankly disturbed menace that feels like his only recourse." The Stage

Review: The Door at Park Theatre 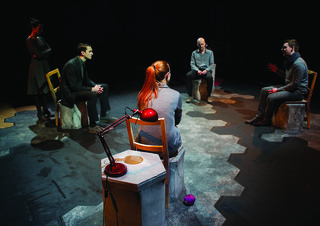 8fold Theatre wants audiences to think for the themselves, to come away with their own conclusion which is great if the play doesn't leave you completely befuddled.

The latest offering The Door, written by Cherise Cross is about John (Philip Nightingale) who has chronic insomnia and attends a support group run by a therapist (Adele Keating).  John is quite resistant to the therapeutic process, has episodes of tinnitus during which he can also hear a door banging.

As the play progresses there are hints of a confused mind and confused reality - the description of a girlfriend that matches the therapist, for example. There are also some odd interludes that hint at something sinister and organised which made me think of the film Trance about a man being hypnotised in the hope that he'll reveal a forgotten secret.

I suppose the idea is how much is in John's head and how much is real. Are the fellow therapy group attendees actual people or figments of John's mental state, did his girlfriend try and help him before leaving him or was that his therapist. Is he still going to work or has he retreated to his flat drinking whiskey.

Review: Matthew Macfadyen and Stephen Mangan are Jeeves and Wooster

Every now and again comes along a comedy that is perfect silliness and Jeeves and Wooster: Perfect Nonsense at the Duke of York's is one.

The humour is farce gleaned from two narrative threads. Wooster - PG Wodehouse's hapless toff - has just got into a bit of a scrape involving a silver cow-creamer, miss-directed affections and an extremely tall German gentleman. One of his club drinking pals, in hearing of the tale, suggests it is the stuff of a stage play and so Wooster decides to give it a go.

Assisted by his capable butler Jeeves (Matthew Macfadyen) and his Aunt's butler Seppings (Mark Hadfield), who between them play all the other male and female characters, you are set upon a journey where the finer plot details - there is a lot of blackmail - is of lesser importance than the fun and japes.

Review: Passing By at the Tristan Bates 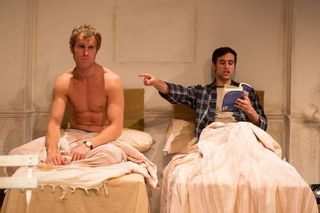 Written in the 1970s Passing By is set in a New York that is a gritty mix of booming creative scene, street crime and dereliction. It is also set against a society in which two men seen kissing in public could be arrested.

But Passing By is remarkable for what it doesn't say rather than what it does. We have grown used to political gay plays and perhaps for that reason Passing By initially seems like a soft touch because its two gay characters don't dwell on issues of homophobia or prejudice. Instead it remains in the background focusing instead on a love story in which the two protagonist just happen to be male.

Toby (Rik Makarem) and Simon (James Cartwright) meet in a cinema and end up in bed. However, there is an attraction that goes beyond the carnal pleasure of a one night stand. Simon is alone in New York having travelled up from Florida to get a job and is glad to have found a kindred spirit but Toby is reluctant to embark on anything more substantial as he is planning a long trip to France where he hopes to develop his career as an artist.

Continue reading "Review: Passing By at the Tristan Bates" »

Props with a life of their own, when 'dead' became 'bed' and the Richard II Star Wars connection

Occasionally I'm asked to defend my obsession with theatre-going (nobody told me interests were limited to a certain number of times/hours a week). Most recently because I was seeing the RSC's Richard II for a second time in just a few weeks.

Going to the theatre a lot and repeat viewings require two different responses and as the comment was in response to the latter on this occasion, I'll address that one. My stock response is you wouldn't watch your favourite DVD or listen to your favourite album only once.

OK so watching a DVD or listening to music doesn't take a massive amount of commitment other than a bit of time but with repeated viewings of a play it normally falls into two categories. Either its the play/cast combo and I know I'll regret only booking to see one performance or I just enjoyed it so much I have to see it again.

Richard II is a play I love and David Tennant is always a treat to watch performing Shakespeare. There is a particular joy in seeing a play twice and in quick succession because every performance is unique and you inevitable notice new and different things the second time. For this particular performance there was the added incentive of a Q&A with some of the cast afterwards.

Knowing where the cast and director has taken a play means you can look out for other things. For instance the part of Aumerle (Oliver Rix) is rendered far more significant by his actions at the end of this particular production and that character's gestures and reactions, in the earlier parts,  become all the more interesting on a second viewing as a result.

Continue reading "Props with a life of their own, when 'dead' became 'bed' and the Richard II Star Wars connection" »