Review: The lovable Liolá at the National Theatre 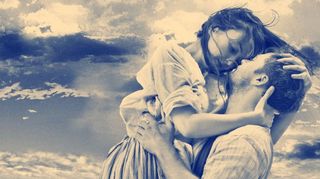 Liolá is a cad. He loves 'em and leaves, often with a baby on the way which he then hands over to his mother to look after. He doesn't want his wings clipped and even if he did want to marry what mother in the village would give their daughter to him?

By all accounts you shouldn't like him but in Rory Keenan's hands and in Tanya Ronders version of Luigi Pirandello 1916 play you do.

Keenan's Liolá oozes charm, always ready with a song and a dance and wink to entertain the villagers when they are about the mundane task of harvesting. It is what sustains them, that and gossiping. For Liolá the hop in his step and charm is his currency not having anything else to trade. He flirts with the women and girls, plays games with his young sons and is generally loved by everyone.

Everyone, that is, except for Simone (James Hayes) who has the worldly possessions that Liolá lacks but no children to pass it onto. He's married for the second time to orphan Mita (Lisa Dwyer Hogg) and after five years he still doesn't have an heir and is growing bitter with a tendency to lash out and humiliate her.

Continue reading "Review: The lovable Liolá at the National Theatre" »