Review: Joe Wright directs Chiwetel Ejiofor in A Season in the Congo at the Young Vic 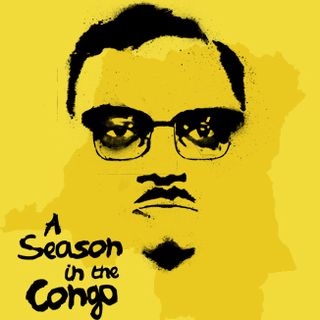 In Joe Wright's production of A Season In The Congo he has approached the storytelling like an impressionist painter approaches a canvas.

His defined brush strokes here on the Young Vic stage are a careful juxtaposition of music, dance, movement, song, dialogue and puppetry. It shouldn't work but it does and it works really well producing an evocative and atmospheric piece that is at once circus-like in its colour and vibrancy and dark in its subject matter.

The obvious treatment for Aime Cesaire's play about Congolese independence fighter Patrice Lumumba would be a straight-down-the-line political and historical drama but Wright's approach succeeds in creating something more sensuous and steeped in African culture. Music entwines the narrative utilising the lilting tunes of the likembe and tribal beats.

Old and new story telling too is entwined. Likembe player Kabongo Tshisensa in traditional dress acts as the sage voice of experience. He performs fables in Congolese as short interludes which are translated by the cast and act as warnings about what might happen. It is captivating as are Chiwetel Ejiofor's political speeches as Patrice Lumumba. He portray both a commanding and charismatic leader.

Continue reading "Review: Joe Wright directs Chiwetel Ejiofor in A Season in the Congo at the Young Vic" » 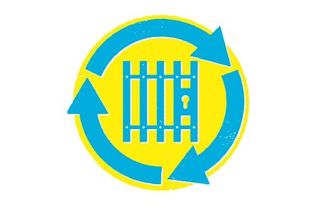 Mint is Clare Lizzimore's first play and it starts off well enough. Alan (Sam Troughton) is in prison and receives various family visitors from his quiet father (Alan Williams) to his chatty and unsubtle mother (Debbie Chazen) and two sisters.

The first three quarters of the play see Alan transferred from prison to prison, his older sister Stephanie (Laura Elphinstone) gets married and has a daughter, Amber (played later by Tess Fontaine) while his younger sister Nicola (Angela Terence) completes her school education and goes to university.

As time passes the families lives go on, Alan becomes more accustomed to prison life and the visits evolve from from the awkward initial conversations and inappropriate comments to something resembling a new normal.

Alan is eventually released and there is a slightly awkward family celebration. However the initial excitement and promise of a new start quickly fades as the harsh reality of life with a criminal record sets in.

Review: @Propellertheatr Twelfth Night and The Taming of the Shrew at the Hampstead Theatre

Each year I see Propeller I get a little more smitten with them. I mean what isn't to love about an all male Shakespeare company that almost guarantees at least one appearance of a pair of bare buttocks?

Smut aside they have an irrevant, fresh approach to Shakespeare that I love often stuffed with joyous moments that have the plays rocking along.

First up is Twelfth Night: 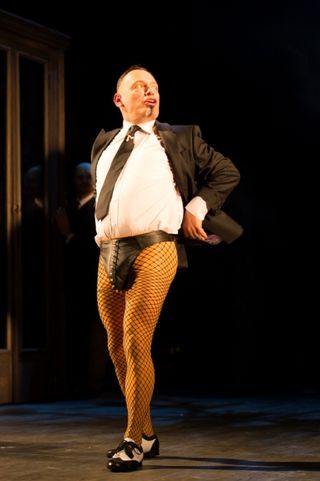 Having seen The Globe's brilliant, traditional and very lively production with Mark Rylance and Stephen Fry earlier in the year I was expecting Propeller to ratchet the physical comedy to new levels adding their own trademark spin. But it turned out to be something I wasn't at all expecting and I liked it all the more for it.

This was a melancholy, almost haunting production of Twelfth Night which made the contrasting comedy moment all the funnier.  There were still moments of farce and silliness, snatches of modern tunes amusingly appropriate to the scene and flirtation with the audience but in between it was far subtler showcasing something more akin to the reflective side of love.

Relationships between characters I'd never noticed before or rather took for narrative contrivances got a chance to blossom away from the usual frolicking.

The initial storm sequence was done with a ship in a bottle and the twins (Viola - Joseph Chance and Sebastian - Dan Wheeler) born aloft by others in the company as if floating on waves. Then we meet Orsino (Christopher Heywood) in an almost Miss Haversham-style repose. There is a huge chandelier on its side in the middle of the floor and dust sheets over huge wardrobes with antique mirrored doors which would become the main set (for both plays). These acted as both entrance and exit points, doors to slam and hidey holes and changing rooms, tipped on their side to make tables and pushed to one side when not needed.

Continue reading "Review: @Propellertheatr Twelfth Night and The Taming of the Shrew at the Hampstead Theatre" »

Dr Who, Q, Watson and the quest to thwart Moriarty, no not a dream but a A Curious Night At The Theatre

When Dr Who (Matt Smith) asks the Curious Incident of the Dog in the Night Time's hero Christopher Boone (Luke Treadaway) to stop Moriarty (Andrew Scott) spreading a virus you know there is something special going on.

When Christopher is guided by supply teacher called Jude Law (yes that one), visits the Queen (Helen Mirren) and Q (Ben Whishaw) en route then you have something very special. Add in musical interludes by the likes of Bat For Lashes, some stand up by Simon Amstell and a special mystery guest that turned out to be Coldplay's Chris Martin and it is off the scale. No wonder more than £100,000 was raised for the National Autistic Society and Ambitious About Autism. But that doesn't even scratch the surface of the delightfulness of the gala, world premiere performance of A Curious Night At The Theatre.

This special one-off story was written by Curious author Mark Haddon and the play's adapter Simon Stephens (both who ended up on stage for a panel game of Mel Giedroyc devising - no this wasn't a dream, honest).

The writers created a series of connected sketches (most filmed on location and projected onto the wall at the back of the stage) which beautifully melded the fiction of Christopher's world while simultaneously smashing it with the reality hammer. There were frequent references to Luke Treadaway having a body unusually honed for a 15-year old boy, mentions of the Curious Incident 'shitting Oliviers and of course other work the actors have done.

It was all beautifully blended so that at one moment Q was explaining some maths to Christopher and then next telling him he could arrange a meeting with Moriarty because he'd been on stage with him in a Mike Bartlett play called Cock.

One or two key scenes from the Curious Incident were played out with a twist so that Jude Law got to have a go at Christopher's scene where he imagines he is in space and is carried about the stage to recreate the absence of gravity.

There were so many lovely moments throughout the evening -  Simon Amstell talking about his crush on Ben Whishaw, Chris Martin's trousers coming undone while he sang acoustic versions of his songs, banter between Martin and Jude Law about Robert Downey Jnr taking the lion share of any film fees (Chris Martin is married to Gwyneth Paltrow) - it would be impossible to mention them all.

Curious Night was a unique and special evening and one I'll always remember. And worth every penny.

For a fuller report of the evening head over to Poly's blog for her two-part review.

My review of Curious Incident of The Dog in the Night-Time in the West End from 2013.