What to expect from an all female production of Julius Caesar 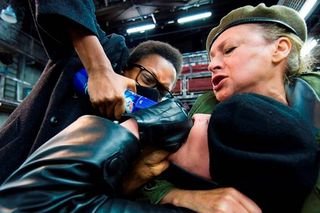 Watching my first all female Shakespeare this week - Julius Caesar at the Donmar - was an illuminating experience. Primarily because I went in with few conscious expectations but the experience raised so many questions in my mind that subconsciously I must have certain expectations.

When all-male companies do Shakespeare it adds an extra level of humour to the comedies – men in women's clothing is amusing – for the tragedies and histories it depends on how it is played. I’ve been moved to tears by a male actor playing Gertrude in Hamlet and I’ve seen a Richard III where Richard was camper than the female characters.

A question then, is whether the gender swap is part of the performance or whether the actor is merely a vessel for the character? 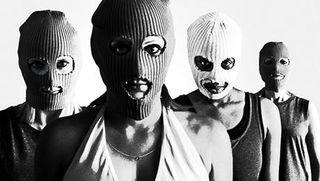 I've seen plenty of all male Shakespeare productions but never an all female and I'm not sure what I was expecting, except that is wasn't going to be an ordinary production.

And it certainly wasn't ordinary. The Donmar's auditorium has been stripped back to the walls and floor. The stage is at foot level of the front row and the padded bench seats have been replaced, in the stalls at least, with chairs I last saw in school assembly.

There are a couple of metal platforms across the back wall reached by metal steps and TV monitors with split screens show CCTV footage of corridors along which you occasionally see people walking or running. It is industrial and institutional in tone and reminded me a little of the Young Vic's Hamlet with Michael Sheen last year but whereas that was a mental hospital this is a prison.

*Production spoilers alert* The setting is a hint that this is going to be far from stereotypically feminine. If the boys can do it loud and brash in a banging metal food trays against metal railings kind of way then the girls can too (I've never heard such noises murders).

The actors burst onto the stage in prison regulation track suits, 'Caesar' (Frances Barber) is greeted with a contemporary song, muscular choreography and gestures, all her followers creepily wearing masks of her face. The fateful 'Ides of March' speech is delivered as a horoscope from Heat magazine and for a moment I thought it was going to be an adaptation rather than the bards words.

But the production soon settles into Shakespeare's language telling the tale of the overthrow of Caesar who's rise to power has been through dubious means and the subsequent fall of those that engineered his demise.

And for a while, quite a while, the prison setting faded into the background until about two thirds the way through - it's 2 hours without interval - when Shakespeare's characters become prisoners again. It's a brief scene, when the mob turn on Cinna the Poet, which has gone a bit wrong and needs to be re-enacted by the prisoners.