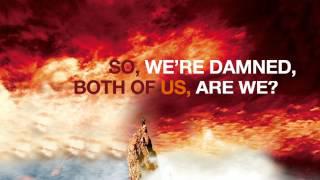 This week on Twitter I was accused of having a 'love in' with the National Theatre but isn't that the nature of theatre and the arts generally, not everything is going to please everyone?  I just happen to have had a run of plays at the National that I have liked when not many others have.

The play that prompted the comment was Damned By Despair which is still in preview at the Olivier.

OK so the set isn't initially inspiring and looked like something that had been dragged out of storage from an old Flash Gordon film but it wasn't distracting and the production has its grand moments later on. Indeed it is another play where, if you duck out at the interval you miss most of the best bits  - Lyn Gardner posed the question this week whether it is OK to walk out of a play.

The fact that I got to the interval thinking the first half had flown by means I must have been getting something out of it. I certainly wasn't bored.

I've never before seen Tirso de Molina's 17th Century play about faith and fate, forgiveness and damnation - a dark and dense subject matter and not something that wouldn't normally appeal.

So maybe it is Frank McGuinness's updating of the language, giving the actors a humour and lightness to work with and allowing for colourful characterisation that made this entertaining? Turning to see the source of the beautiful voice singing behind me to find Harry Potter standing there also helped. (OK so it wasn't Harry Potter but it was a boy of Philosopher's Stone age who happened to be wearing round spectacles and a cloak - he was a shepherd in the play not just a random singing, Harry Potter-look alike.) 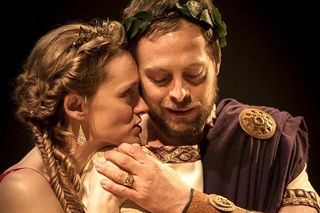 Josie Rourke's latest offering at the Donmar Warehouse had me weeping and it wasn't because I got sand in my eye - there is a lot of sand in this production.

But crying at a tragic love story is a good thing right? Well yes but it was in spite of many things and testament to some wonderful moments.

Jean Racine's story, in a translation by Alan Hollinghurst, is a tale of quiet passion and emotion rather than of high drama. As @Polyg commented, had Shakespeare written it, it would have ended very differently and I like it for that.

Berenice (Anne-Marie Duff) is the long-time lover of Titus (Stephen Campbell Moore) who'd been forbidden to marry her by his father. When his father dies and he succeeds as Emporer it looks like the two will finally get up the aisle. The problem is Berenice is a foreign queen and Titus risks earning the wrath of his people by marrying.

Meanwhile Titus and Berenice's friend Antiochus (Dominic Rowan) is secretly in love with Berenice and decides to confess to her before she is lost forever to his love rival.

The story is played out on a spectacular set. Aside from a couple of light wooden chairs and some broken pieces of fencing  there is what I can only describe as a delicate flying staircase. It has a spiral at one end then bridges across the stage before sweeping down in a curve of steps.