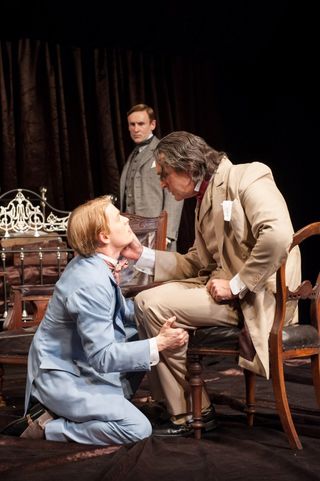 With a stage draped in rich, chocolate-coloured velvet there were two thoughts in my head, well three actually. Firstly, how sumptuous; secondly, someone is bound to trip or slip (Rupert Everett did) and, thirdly, where does one go about getting a piece of velvet that colour and of that size (not that I want some, just curious).

The velvet forms the back drop for a posh London hotel room where David Hare's play The Judas Kiss charts the tempestuous relationship between playwright and poet Oscar Wilde (Everett) and Lord Alfred 'Bosie' Douglas (Freddie Fox) at two key points in their lives.

In the first half, the velvet half, Wilde is holed up in the hotel with the press gathering outside and rumours of his imminent arrest for sodomy and gross indecency circling, having got into a spat with Bosie's father. On one side his friend Robbie Ross (Cal Macaninch) is trying to persuade him to flee abroad instead of the almost certainty that he'll end up in prison.

On the other, Bosie wants him to stay and fight for his name and reputation believing that if he lives out the rest of his life in exile he and his work will quickly be forgotten. Bosie also hates his father and doesn't want him to win.

In the second half the action moves to Naples post Wilde's imprisonment. The chocolate velvet is replaced with a gauzy white material which gathers on the floor around a single bed at the back of the stage (less to trip over) where we find Bosie in a post-coital slumber with a local fisherman. Let's just say that when the two awaken there is more than a little 'cheekiness' on display with the men feeling very relaxed in their surroundings and Wilde drinking in the view.

Such a trio of potential delights lined up for this coming week that it could be the best week of the year, so far.

First of all I'm stupidly excited about The Judas Kiss tomorrow night at the Hampstead Theatre. It stars Rupert Everett who is someone I never thought I'd get a chance to see on stage and the lovely Freddie Fox who has proved a delight in the last two plays I've seen him in. The story of Oscar Wilde and his young lover Bosie is a familiar one but curious to see what David Hare's spin on it was.

Then on Tuesday there is Three Sisters at the Young Vic. Have a love/hate relationship with Chekhov but this is one of his plays I've never seen before and with Mariah Gale and Sam Troughton among the cast I'm hopeful it will fall in the former category. The trailer is intrigue at least (follow link above).

Finishing off the trio, on Thursday I'm off to see I Am Camera in the tiny Vault space at the Southwark Playhouse with Stan fav Harry Melling. Have loved everything I've seen him do on stage, most recently in When Did You Last See My Mother last year at the Trafalgar Studios which I gave five stars to. It's based on a Christopher Isherwood memoir. *rubs hands together with glee*

Hedda Gabler: Tears and scheming from Sheridan in the so called female "Hamlet" role 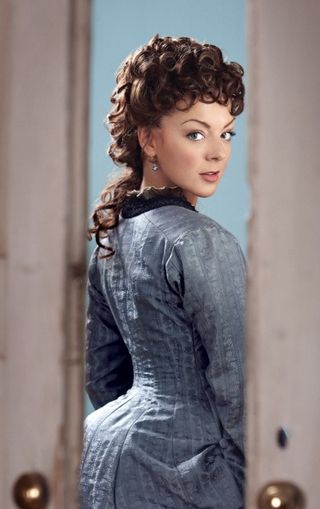 Never seen a production of Ibsen's Hedda Gabler  before but its reputation precedes it, often being referred to as the equivalent role for actresses as Hamlet is to actors.

Having seen the Old Vic's production with Sheridan Smith in the titular role this week I can certainly understand why it is referenced as such. Hedda is a complex and meaty character and one that, like Hamlet, has the draw of a multitude of interpretations.

This production sees the newly-wed Hedda with an older, doting husband George (Adrian Scarborough) who can't believe his luck at winning Hedda but who is also obsessed with his work.

Hedda herself is spikey from the outset, she confesses to her husband's friend Judge Brack (Darrell D'Silva) that she doesn't feel in control of her emotions and finds herself being spiteful and mean without reason or any control.

When we first see Hedda she is leaning up against a window peering out at the audience looking forlorn, trapped and resigned.  The beautiful set is full of elegant windows with rooms within rooms all conservatory-esque and glass heavy.  Pieces of period furniture, lamps and lots of flower arrangements give it a homely feel but their is something cold about the transparency of the inner rooms.

Niceties seem like an effort with Hedda and we soon learn that her decision to marry was more out of fear of not knowing where else to turn having enjoyed the attention of a number of suitors.

Sheridan's Hedda isn't particularly likeable. Her lack of control over her own life leads her to try and manipulate others with disastrous consequences, indeed her behaviour would give psychologists plenty to mull over. However there is something quite tragic about a woman like Hedda, intelligent and full of life who is faced with so few choices and sees her life mapped out in front of her. A woman who is bored with the routine of it all and feels trapped.

It's a play that probably needs a repeat viewing and more familiarity to really get under its skin but I enjoyed, thoroughly this glimpse.

Sheridan proves again to be an accomplished actress and with the rest of the cast also putting in faultless performances. It's getting the thumbs up and five stars from me and I hope to see many more Hedda's.

Hedda Gabler is on at the Old Vic until 10 November.

You can read a far more eloquent review over on @polyg's blog.