First play of 2012: Fog at the Finborough 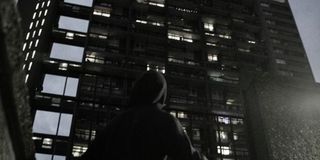 My first play of 2012 is a new offering written by Tash Fairbanks and Toby Wharton, the latter being a first time writer. It's called Fog - the nickname of the central character (played by Wharton) who has just moved into a new council flat with his dad Cannon (Victor Gardener). Cannon has returned from active service in the armed forces having abandoned into care Fog and his sister Lou (Annie Hemingway) when their mother died.

At first things seem to work out between father and son but the cracks soon begin to appear. Fog has had a difficult and troubled time in care and is scarred by the experience. He struggles with his own identity easily following others lead while in private he fantasises about being a powerful 'big man'.

His ambitions lie in small time drug dealing, smoking pot and getting a nice car to drive around in. Cannon is obsessed with finding Lou to complete the family reunion and quickly grows disappointed with his son's lack of ambition and his own inability to find a good job. Life after his return isn't quite as he imagined.

Meanwhile Fog's black friend Michael (Benjamin Crawley) and his sister Bernice (Kanga Tanikye-Buah) are on the up. Michael is studying to get into university and Bernice is in line for promotion.

When Lou finally reappears the full truth about what happened to the siblings in care emerges and Cannon comes face to face with the consequences of his abandonment.

On the back of the play text it says Fog is about two contrasting families one white and dysfunctional and one black and aspirational but I don't think this is its strength or really the heart of it. It is Fog's story and a story about the impact of abandonment and the care system.

Fog's dislocation and neediness beneath the veneer of street cred is, on reflection, heartbreaking and Bernice's dislike of Fog and Lou certainly adds intrigue about their troubled past. But the disintegrating relationship between Fog and Michael feels like an unnecessary contrivance that detracts from the central plot. As a result the revelations about Fog and his sister's past feel less shocking than it should.

It is otherwise a promising script, well acted and engaging enough but it doesn't quite feel like it fulfils its full potential.

I'm going to give Fog three and a half stars. It runs at the Finborough until January 28 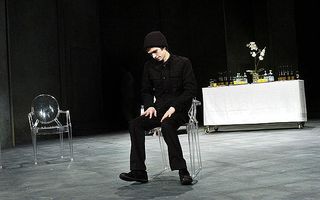 If you've never booked to see a play recording in the theatre video archive at the V&A museum it is certainly an interesting experience shaped, quite naturally, by an environment designed for researchers rather than enjoying theatre.

But soon, for a selected number of plays, there will the chance to see recordings in comfort, on the big screen in the museum's posh education wing.

The V&A's collection of theatre recordings is just  bursting with plays I missed and would love to see that it makes me hyperventilate a little just reading about what they have.

Nine plays have been chosen for the first season of public screenings starting with Aladdin at the Hackney Empire in 2010 on Jan 22.

Naturally the play I'm most excited to see is Hamlet at the Old Vic with Ben Whishaw from 2004. I've seen it on the small telly in the archive but to watch it on a big screen is an opportunity I can't miss. Also on my list is The Alchemist with Simon Russell Beale recorded at the National Theatre in 2006 and the Eve Best/Benedict Cumberbatch Hedda Gabler from the Duke of York's Theatre in 2005.

Each play will be introduced by either a member of the original cast or a museum curator. As Mr W always claims in interviews not to remember anything about any of his performances after he's finished them my money is on him NOT being an original cast member doing an intro for Hamlet. But a Rev can dream.

Further plays are yet to be announce but you can view details of the schedule, timings and location on the V&A website

Apologies for posting this late, my fault not Poly's...

11:30pm on BBC Radio 4: Oscar and Al Pacino, Al Pacino talks about Oscar Wilde, playing Herod in the play Salome and his film 'Wilde Salome', a blend of drama and documentary of staging the play in Los Angeles. If it's too late to listen live, this is what iplayer was invented for:

9pm on BBC4: The Story of Musicals, first in the series. The story of british musicals with contributions from Andrew Lloyd Webber, Cameron Mackintosh, Tim Rice, Elaine Paige, Sheila Hancock, Willy Russell and others.

7:30pm on BBC1 North East: The Inside Out programme reports on the 175 years anniversary of Newcastle's Theatre Royal. Very interesting links on the website.

19:15 BBC Radio 4: Front Row reports on how puppets have entered the theatrical mainstream, featuring the Handspring company which worked on War Horse (@oughttobeclowns, this programme is for you)

The Rattigan Enigma, Benedict Cumberbatch explores the life and work of the playwright Terence Rattigan 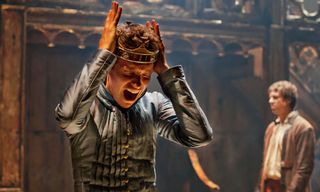 When I saw the Donmar's Richard II in preview last December I enjoyed it but it failed to fully hit the mark. The professional reviews were mixed but friends who've subsequently seen it have been very impressed. So I'm glad I booked to see it twice and New Year's Eve saw me at the Donmar again.

This time I was sat facing the front of the stage rather than the side which may be a factor but what was evident is how much more polished the performances have got. Eddie Redmayne as the King losing his grip on his power and crown was a lot more assured.

The key test for me on second viewing was to see if his portrayal of Richard would make me cry. The two previous productions I've seen have made me cry; the tragedy of someone who makes mistakes and loses everything he's ever known tugs at the heart strings. He can be a difficult character to feel sympathetic towards but I've always felt it an important response to the play. At the very least you need to be moved by his demise and how it affects him.

And I'm please to say that Mr Redmayne did make me cry on New Year's Eve. He showed the vulnerability of the man behind the crown. Stripped of his kingship, a right and position held since his childhood (in history Richard came to the thrown aged 10 and had been ruling for 22 years by his death) he becomes lost and conflicted by contrasting emotion.

In fact Eddie did such a wonderful and convincing job, I'm tempted to try and see it again before it finishes on February 4. First time I gave Richard II four stars but I'm going to revise that to five.

The most important theatre awards (after the Whingies*): The StOliviers 2011

That's the sound of me jumping on the awards bandwagon again and lets face it the only ones I'll ever wholly agree with are my own. So here is my attempt to honour (and dishonour) the theatre world for it's work and effort (or lack of it) in 2011...

Boat in a storm. A drenched Jude Law struggles aboard and then immediately takes his top off revealing a torso so buff I had to stifle a gasp. I know I'm not alone in this (click on pic for full size).

Propeller leads the way when it comes to gore in fact they laugh in the face of dry stabs or armpit stabs. And they don't just stab, they chop and saw and spray, spray, spray stage blood by the bucket loads.

When you urge people to go and see a play because the set and what is does is amazing, it does stop and make you think.

The living on a different planet:

Hello marketing/ticket sales/admin people at the Royal Court *waves*. In the world of real people, working normal jobs (that's jobs that start at 9 just in case you weren't aware) we don't reveal details of our new season online at 7am and then put the tickets on sale at 9am as this leaves only 2 hours to organise friends and suitable dates at a time when you are getting ready and going to work.

Continue reading "The most important theatre awards (after the Whingies*): The StOliviers 2011 " »

Rev Stan's 2011 theatre review - the good and the bad lists 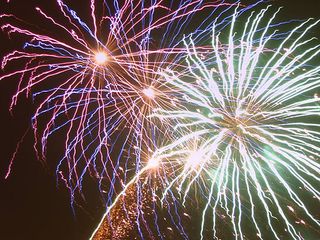 Well, well, well, here we are, another year gone by but what a bumper year it has been. My theatre going reached a new level of frequency for a start, kicking 2010's total of over 70 into a round 100 plays seen in 2011.

I'm still a lightweight compared to some (@trpw, @glenpearce1, @oughttobeclowns...) I know, but I have seen over 80 films too and that's my excuse and I'm sticking to it.

2011 saw arrival of the Stan Theatre Spreadsheet which was my attempt to be more scientific, marking everything I saw out of 100.

There was still a bit of overlap in scores among those plays vying for my top ten so I judged based on entertainment value and how memorable the production was, compared to the other contenders. This, combined with the scores, decided the ultimate order and which plays made the final slots.

Anyway without further ado, here are the best and worst of what I saw in 2011:

The best (in order):

...and they made me properly laugh at Shakespeare comedy for the first time.

Hands down the theatre spectacle of the year and getting the leads to swap roles put a whole new spin on revisiting a play as an audience member.

Every now and again comes a fringe production that punches way above it's weight. This is one of those.