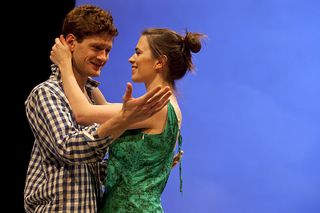 As any writer knows, endings are notoriously difficult. At the first interval (there are two) in Alexi Kaye Campbell's new play at the Royal Court, Faith Machine, I tweeted that I was very much enjoying the play but was interested to see where it was going.

The problem is that after 2 hours and 50 minutes it didn't really go anywhere, it just sort of fizzled out in a cheesy cul de sac. Which is a shame because I really enjoyed most of the journey along the way.

Campbell is a fine writer. His observations are spot on, he is witty and he is clever but this examination of faith versus capitalism feels like a broad brush doesn't really challenge or surprise as it should.

It's set in New York, Greece and London and centres on Sophie (Hayley Atwell) who leaves her American boyfriend Tom (Kyle Soller) because he is taking a job with a pharmaceutical company who's record on ethics is dubious. Her father Edward (Ian McDiarmid) is a Church of England Bishop losing his faith in the church because of its attitude towards gays. He's retiring in the family's holiday home on a small Greek Island with his house keeper, a former Ukrainian prostitute Tatyana (Bronagh Gallagher).

In the first scene we see Sophie and Tom breaking up and the play subsequently jumps back and forth to the years pre and post the split.

Was Trevor Nunn's The Tempest worth the two hours sat on a cold step? 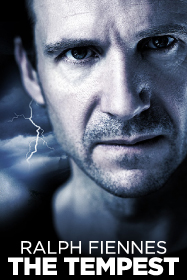 Tried last weekend, unsuccessfully, to get a day seat for the Trevor Nunn directed, Ralph Fiennes starring, production of The Tempest at the Theatre Royal Haymarket. The problem is that, as I discovered after an hour and half wait, they've reduced the number of day seats to 9 (and it is one per person). I was 10th in the queue. [insert image of Stan with cat's bum face]

But I tried again on Thursday and ended up front of the line*. So was it worth the effort?

Well at the interval I wasn't sure.

Nunn and his production team have gone traditional. Jacobean costumes, lots of music and dancing and traditional theatrical devices like spirits floating across the stage on wires.  There is lots of wire work. Even the set, a derelict theatre, seems traditional.

He has also taken full advantage of having a budget that will stretch to 23 actors including eight spirits (not all on wires at once!)  three of which are Ariels, the central Ariel and his divided self.

This traditional approach added to my doubts at the interval. People dancing around in painted body stockings pretending to be spirits and occasionally singing took a bit of getting used to. But it also didn't quite gel at times. The scenes with the courtiers fell a little flat and the comic scenes were funny but not that funny, although Nicholas Lyndhurst's Trincolo and Clive Wood's Stefano will, I'm sure, get better and better as the run progresses. This was the 5th preview performance, press night is Tuesday.

Continue reading "Was Trevor Nunn's The Tempest worth the two hours sat on a cold step?" »