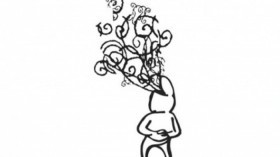 First of two of the Rough Cuts season I'm getting to at the Royal Court this time around and it is another one of those that leaves you desperate to find out how it ends.

We got the first act and the first scene of the second act - about 55 minutes worth - of Arinze Kene's play about a child's death - Wild Child.

It opens at the inquest which recounts the story leading up to the death of Abigale. Abigale and her mother Emilienne and father Unity are immigrants. Unity works initially as a cleaner for her teacher but then dies of a heart attack.

Emilienne turns to her local Evangelical church for support where Pastor Good Morning sells blessings to his congregation and convinces her that Abigale is on her way to become a witch. He recommends praying for three nights to cure her. Abigale herself is painfully shy you can't imagine anyone less likely to have evil in her.

The scenes are supposed to be intermixed with shadow puppets which tell further bits of the story - these were read out by the director and I'd be intrigued to see how they worked in the overall production.

But what intrigues me more is what happens to Abigale. The play gives you several tantalising hints. Is it the duplicitous Pastor Good Morning who has an eye for young girls but also superstitious? Is it her mother who believes beating her daughter is the only way to teach her respect? Is it the boy at school who taunts and teases her?

While it is great fun and a privilege to see a work in progress it is also slightly frustrating not knowing how it all pans out. This is definitely one I hope makes it into a full blown production.

There are three more plays in the Rough Cuts season, each on for two days and details can be found here.

July's theatre round up

Wow, what a bumper month July turned out to be, five plays earned five star reviews, although one of those was a second visit to see Propeller's Richard III which I'd already given top rating to. The remaining nine plays I saw got four stars apart from one which let the side down considerably. Shame on you Woman Killed with Kindness at the National Theatre and your 2 star, 35% score.

So here were my top three (excluding RIII):

1. Propeller's Comedy of Errors - credited with changing my mind about Shakespeare's comedies 87%

2. The Pride, Sheffield Crucible - loved it when I saw it in New York with my fav Ben Whishaw and didn't think it could be topped but the cast in Sheffield proved me wrong and reminded me that Mr W aside, it is a cracking good play 85%

3. Journey's End, Duke of York's - lived up to the hype and extremely moving 81%

July's run of five star plays is a record for this year but unfortunately the one two star review dragged the average down and February still remains my top month - but only just.

August has had a slow start - even a theatre addict needs to ease off once in while - but it is to be short lived and next week, breaking my New Year's resolution for the second time, I'm seeing three plays in three days.

Of those and the rest I have booked, the ones I'm particularly excited about are Kevin Spacey's Richard III, Anna Christie at the Donmar and Broken Glass at the Tricycle which will be my first visit there. Bring it on.

The play that made me leave at the interval

It's the second time I've ducked out of a performance at the interval. The first was nothing to do with the play but more the environment - me and outdoor theatre just don't mix.

This time it was sadly the play or rather the performances, with a heavy dose of fatigue. And which play was it I hear you ask? The Lady of Pleasure by James Shirley at the White Bear Theatre in Kennington. It's a comedy written in the early 17th Century.

Now I do feel slightly mean because this isn't the worst thing I've seen. The extreme cheapness of the ticket aided my decision. I also feel mean because everyone was trying so hard and I'm loathed to rubbish their work when they are probably doing it for little or no money but there in lies the problem. They were trying too hard.

I've said it before about other pub theatre performances, the acting was too big for such a small space. If you are going to perform big then it's got to be funny (this is a comedy after all). It also felt very self-conscious and a little bit stiff. And some of the actors need to pay attention to the clarity of delivery.

The play itself was potentially quite interesting, with three interwoven plots and I like the way the production was given a contemporary make-over and set in the 1960's but I couldn't engage with it and quickly lost interest. I wasn't the only one. There was a lady sat on the opposite side of the stage who was nodding off.

A very good production can grab me even when I'm very tired but this rarely came close.

Perhaps it will improve with time - this was the second performance. Still it feels a real shame and I genuinely don't like rubbishing small, shoestring budget productions but you can't win them all. I'm not going to rate it as I didn't see the whole thing and there aren't any other reviews that I can see just yet.

Help save the Southwark Playhouse

Am quite fond of the Southwark Playhouse which is nestle underneath the railway arches at London Bridge Station. The rumbling trains overhead, the exposed brickwork, the higgledy-piggledy homey feel of the bar area and of course its myriad of great productions. Admittedly not everything I've seen there has been absolutely wonderful but then neither has everything I've seen at the National Theatre just down the river.

The great thing about Southwark Playhouse is that it is cheap - the airline style ticket seating is a great idea - and when you are as addicted to the theatre as I am, with finite resources, it's one of the few places I can get my fix without having to rob a small child of their dinner money.

But all that is in jeapardy. London Bridge Station is being redeveloped and the plans for the station don't include a home for the Southwark Playhouse. Imagine being asked to leave the room while it's spruced up for the party and then not invited back.

The station redevelopment won't be complete until 2018 and the theatre can find temporary space but really wants a permanant home back at the station. The Southwark Playhouse team is asking people to email the planners requesting that space be made for the theatre in the redevelopment.

I'll let them explain in their own words but if you've ever enjoyed a play at the Southwark Playhouse and feel it should be given a nice shiny new home then do send an email. The deadline is this Saturday (Aug 6) and all the details of how to do it plus a link to the planning application are below: