June's bumper crop of theatre - the round up

Wow what a bumper month. Not only did I squeeze in 12 plays (and I'm not counting the Flying KB or the ballet) but it's proved a month of rich theatrical pickings. Three plays earned five star ratings but what was number 1? Bloody Richard of course and good job because I'm off to see it again on Wednesday. But here's how the top three/four looked:

=2 Much Ado About Nothing, Wyndhams Theatre 85% - benefited from less hysteria and bedding in on second visit.

=2 Rosencrantz & Guildenstern Are Dead, Theatre Royal Haymarket 85% - up there alongside my favourite plays ie those I'll happily see time and time again.

3. The Emperor and The Galilean, Olivier at the National Theatre - the flawed but excellent epic

And my least favourite? Faith, Hope and Charity at the Southwark Playhouse which got 49%. It dragged the average down slightly 69.7% but still the second highest scoring month this year.

So what is there to look forward in July? Well I've already given the first play of the month five stars which is a great start. I'm really looking forward to seeing The Village Bike at the Royal Court Upstairs and Journey's End at the Duke of Yorks which I've heard glowing things about.

This month will also see me venture further afield, once again, with @polyg to Sheffield to see The Pride. The cast have got a slight disadvantage because it was the play I travelled to New York to see Ben Whishaw in last year.

Shakespeare-athon: @propellertheatr Comedy of Errors and why I now like Shakespeare's comedies 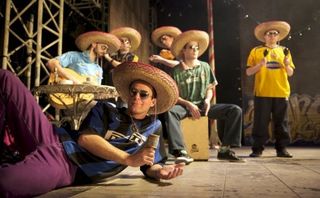 If nothing else, this will be the year that marks a U-turn in my view of Shakespeare's comedies - they can actually be funny, consistently funny and not just amusing.

Before odd scenes and performances would make me laugh, Oliver Chris's Bottom (ahem) and Derek Jacobi's Malvolio for example. But, hot on the heals of the thoroughly entertaining Tennant/Tate Much Ado About Nothing comes the Propeller Theatre's Comedy of Errors at Hampstead.

I'd already seen their excellent Richard III which had the sort of imagination and contemporary interpretation that hinted at good things for Comedy. And I wasn't disappointed, I mean how can you top a man walking across stage with a lit sparkler clenched between his naked buttocks?

But I get slightly ahead of myself. Like in RIII, the cast are on the stage as the auditorium fills, this time creating a wholly different atmosphere dressed in sombrero's, shades and football T's and playing Spanish music. There is a village-people style cop, all leather trousers, shades and moustache helping greet people with a 'buenos noches'.

And then they begin. The big plus point of A Comedy of Errors is that there is no laboured set up, it is done in a short opening scene and off we go at break-neck speed. Two sets of twins separated as children, mistaken identity and hilarious consequences is all you really need to know.

Continue reading "Shakespeare-athon: @propellertheatr Comedy of Errors and why I now like Shakespeare's comedies" »

After the outlandish matinee performance of The Merchant of Venice it was time for a more sober, evening performance in Stratford. But that doesn't mean Macbeth was dull or lacked a few of its own surprises, certainly not.

It was a far more straight down the line production albeit with a bang or two. Few props, traditional costumes, musicians and of course my favourite: stage blood. Lots of stage blood.

Jonathan Slinger, whom I loved as Richard II four years ago, takes the lead as the ambitious lord persuaded to take a murderous route to the throne on the prophecy of three witches and the encouragement of his wife.

The nice twist in this production, although and again this is a confession of my own ignorance because I didn't fully appreciate it until quite far in, is that the three witches have been replaced by three children. The fact that I was still waiting for the witches to appear long into the story (I'm not telling you how long, it's embarrassing enough) I'm blaming on only having seen the play once before.

Shakespeare-athon: The manic Merchant of Venice 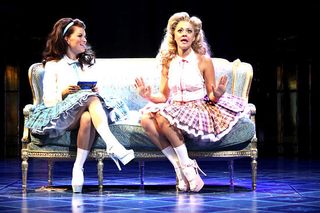 The opening to my trio of Shakespeare plays was an avant-garde Rupert Goold production of The Merchant of Venice. And it was certainly a spectacle.

It's set in Las Vegas complete with an Elvis-impersonator, slot machines  and game-show vignettes. The female leads Portia (Susannah Fielding) and Nerissa (Emily Plumtree) have American accents from the deep south, wear their hair bouffant, their eye-lashes long and heels high. The American accents are more mainstream through the rest of the cast aside from one of Portia's suitors who is Mexican.

What I gleaned from the story is that the rich Portia has been left three boxes from which her suitors have to choose one - if they discover her portrait inside they win her hand in marriage. Bassanio (Richard Riddell) fancies Portia but needs money in order to be a suitor and calls upon his good friend Antonio (Scott Handy) for help.

Antonio is having cash-flow problems with resources tied up in various trading deals which have yet to come to fruition, so he offers to use his good credit to borrow the money for Bassanio. He goes to Jewish money-lender Shylock (Patrick Stewart) who agrees to lend him the money, the bond being not interest but a pound of Antonio's flesh. (Get the impression Shylock is just a bit peeved with Antonio).

Of course Antonio defaults on the loan and Shylock demands his pound of flesh. Bassanio is distraught and Portia secretly runs to his friend's aid.

I'm not going to lie, the final scene where Portia dances with her blond wig in her hand wearing just one stilletoed shoe confused the hell out of me and it was only down to my friend Jen's explanation (she's more familiar with the story) that I eventually got it's meaning.