Going to the I Am The Wind dress rehearsal 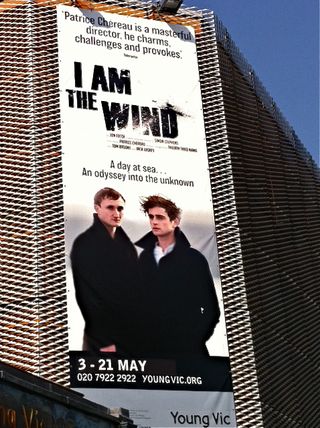 Never been to a dress rehearsal before. Have been to a tech rehearsal but not a dress. I know some theatres let a few select people in but nothing quite like this for the Young Vic's new production of Jon Fosse's I Am The Wind.

There were about 30 or so of us and table of complimentary drinks in the 'closed to the public' Young Vic bar. All very civilised and un-hoi-palloi-ish which appeals to inner snob in me immensely.

I was expecting some sort of introduction, like there was at the RSC's tech rehearsal I went to last year but no, we were ushered into the eerily quiet auditorium seated roughly together in a central block and then the play started.

It's a while since I've seen the stage built so differently at the Young Vic. The seating is still roughly on three sides but there is no raised stage a la Vernon God Little, Glass Menagerie and Beauty Queen of Leenan. If you sit on the front row for I Am The Wind your feet are on the stage.

There is virtually no set but there is a stage-device, for want of a better description, which is quite gasp-inducing and clever. The actors, Tom Brooke and Jack Laskey, certainly work hard as a consequence - and no I'm not going to reveal more, you will have to wait for my review proper after I've seen it in a couple of weeks or even better go and see it for yourself.

All I'll say about the play itself is that it's a thought-provoking piece that is Godot-esque at times. If that isn't your bag then you have been warned. I'm planning to read the text between now and the real performance as it's meaty and there is a lot to digest in one sitting - for my pea-sized, easily distracted brain anyway.

Continue reading "Going to the I Am The Wind dress rehearsal" »

*Sadly this video is no longer available on vimeo but you can view it by clicking here. If anyone has any details of whether it was for stage or screen do let me know. I know the BBC have got some Shakespeare in the pipeline but no more than that*

Give him the part. I've got him earmarked for Richard II at some point but he can do this too. 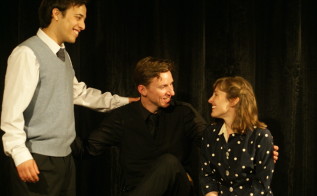 Bad as in the bad folio that is, I'm not damning this Vital Signs Theatre production at the White Bear from the outset, certainly not.

But still, Hamlet in a tiny pub theatre is a risk. Better then choose the less familiar 1603 folio which is much shorter, stripped of the navel-gazing soliloquies and more about action?

Some of the names are different (Ophelia is Ofelia and Polonius is Corambis for instance) but the plot is the same as the more commonly performed 1623 folio.

The result is something that seems at once familiar and different. There is less dialogue to establish key characters, so at times it lacks the depth of its more popular big brother. For example, Gertred feels superfluous for much of the play rendering the closet scene and her easy acceptance that her new husband is a murderer a little out of joint.

Credit must go to the production. There is no room for grand sets and the grave scene is always going to be problematic with no trap door but a series of sheer black drapes doubling as arras/walls and a throw of black cloth over a couple of benches and hey-presto a grave. Although I did find the idea of Ofelia being represented by a folded piece of cloth in the grave a little bit of stretch when Laertes is jumping in for a final embrace.