In slide show viewing order: Michael Sheen, who is playing Hamlet (which I'm hoping to get tickets for next week); I Am The Wind - with Tom Brooke and Jack Laskey (seeing in April); Government Inspector - including Doon Mackichan, Julian Barratt & Kyle Soller  and  Terminus - Declan Conlon, Catherine Walker & Olwen Fouere.

The last two I'm still debating about but will probably see especially as the Young Vic has a buy one get one half price offer on at the moment...

Bloody Julius Caesar at the Roundhouse 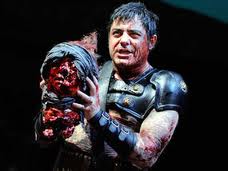 No restricted views to contend with on this trip to the Roundhouse, @adders and I had our own front row*. Brutus and Caesar towering over you to deliver speeches and sword wielding soldiers running straight towards you with blood dripping swords. I was surprised not to find a small spatter of gore or blood on me at the end.

And that was the other particularly great thing about this RSC production of Julius Caesar - plenty of blood and gore. Not a dry stab in sight. Feel for the wardrobe department though. 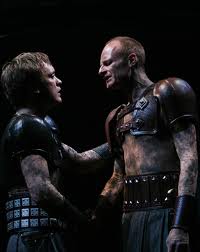 I've never seen Julius Caesar before so I admit some of the subtleties of the rhetoric washed over me as I tried to keep track of which 'ius was which (the Roman's really lacked imagination when it came to names) and who was supporting whom.

This is definitely a boys play. No ladies making or breaking hearts just plain old men, politics and fighting. It nails its colours to mast in the opening scene which is a frantic, bestial fight between Romulus and Remus. The fight quickly segues into wild, almost frenzied, feast-day festivities and celebrations which seem to involve people being whipped.

The celebrations are broken up by some more moderate members of Caesar's senate who quickly sew the seeds of disquiet and discontent with the great leader. The first half examines how this discontent quickly grows into conspiracy with Caius Cassius persuading Caesar's friend Marcus Brutus that Caesar needs to go culminating in his bloody murder.

Not so much going solo but going Twolo to the theatre

This post on the Guardian Theatre blog last week seemed to irk rather a lot of people who go to theatre alone. The piece questioned why there is a stigma attached to going solo to see a play or indeed a film.

Stigma? Pretty much all the thirty or so comments were from people, like myself, who go to theatre on their own regularly and don't feel in the least bit awkward or embarrassed by it and why should we, we aren't living in Victorian England anymore?

What would have been more interesting is if Emma Love, the blogger, had instead looked into the increasing use of social media by theatre-goers and producers.

Take last night, for example, I went to see Vernon God Little @youngvic and mentioned it in a tweet as I was leaving home. By the time I'd arrived at the theatre there was a reply from@pcchan1981 saying 'I'm here too let's meet up in the interval'.

And that is happening more and more. Most of my theatre trips used to be solo but now more often than not I either bump into fellow theatre twitterers or end up arranging to go with like minded people who share my passion for the theatre and whom I've got to know first through social media.

The numbers of theatre fans on twitter is growing, as are the number of those involved in producing it. It's becoming a great source of information about forthcoming productions, ticket offers and of course some good old gossip.

Perhaps for Emma Love's next post on the Guardian Theatre Blog she should get involved with the chat about theatre on Twitter and write about where that takes her rather than worrying whether the person sat next to her thinks she's some kind friendless weirdo.