Back in the theatre saddle or north vs south

Yes I had a lovely time away, thanks for asking. Easing myself back into the world of theatre with a double bill today.

This afternoon @polyg and I are heading north to the New End Theatre in Hampstead (not been before but it's a bijou 80-seater) to see Life After, the debut play of Andrew Olins which sounds interesting.

Then we hot-foot it south of the river to the Greenwich Playhouse (another theatre I've not visited before) to see Dracula. Really interested to see how Liz Lochead has adapted the novel for the stage - Bram Stoker's book was one of my set texts at Uni and a bit of a favourite of mine.

Anyway we'll see whether north or south does fringe theatre the best.

Theatre holiday for a little bit

Tomorrow evening I fly to sunnier climes and throw myself on the uncultured world of a resort hotel, themed food nights and sun-lounger battles. Not my first choice of holiday but as my Mum would say about tea out of a flask: "It's warm and it's wet"

Theatre attendance and ramblings here will resume on my return.

Tribes at the Royal Court 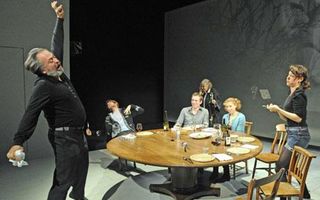 No one could accuse Billy's family of not talking. They talk incessantly at each other: Sniping, teasing, insulting. It's what Dad Christopher approves of. Nothing between parents and children Ruth and Daniel goes unchallenged.

But Billy (Jacob Casselden) sits on the fringes of it all. He's deaf but can lip read, a skill his father (Stanley Townsend) wanted to him to learn so that he can be part of 'normal society' and not reliant on the deaf community.

The status quo of arguments is upset when Billy gets a girlfriend, Sylvia (Michelle Terry), who is going deaf but isn't so good at lip reading. She's been brought up by her deaf parents learning sign language. Billy is the invisible glue that binds the family together but no one realises until he goes on a voyage of discovery into the deaf community his father so abhors.

Tribes is witty and poignant but mostly it's a clever twist on challenging societal norms and prejudices. Casselden and Terry are excellent, as is Harry Treadaway as the troubled and ultimately painfully insecure Daniel.

Kika Markham as Beth delivers lines like someone hasn't told her the difference between projecting and shouting but then perhaps that's supposed to be how Beth talks after being brought up in a family where the loudest voice is the one that is heard.

Another hit from the Royal Court I reckon. Four stars from me. It's doing well over at www.upthewestend.com too aggregating a score of 3.8 out of four from 11 revues and you can catch it until November 13.