I love how more and more theatres are producing trailers. It's a great way to give potential audiences a flavour of a production and in particular new plays.

Just one requst, please don't resort to that awful deep, male America voice over that irritates the hell out of me on film trailers. Unless it's tongue in cheek of course.

Here's the latest from the Hampstead Theatre's new play The Enlightenment. 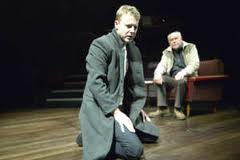 First trip to the Menier and what a fabulous little theatre it is. It feels like the Royal Court's more down to earth, less pretentious cousin with its cosy cafe bar, friendly staff and a strangely comforting saw-dusty smell.

There was one blot on its copy book though and I'll come to that in a moment but first, as some playwright once wrote, 'the plays the thing'. And what a punchy little play A Number is. I don't mean real fisty-cuffs like Sucker Punch over at big cuz's but boy it gives you a lot to think about during its 50 minutes performance time.

OK so playwright Caryl Churchill was on to a bit of a winner with me as I've had a fascination with cloning ever since reading Aldous Huxley's Brave New World as a teen. What she does is focus on the human response to cloning and raises questions about attitude towards life.

The story unfolds through separate encounters between a father and three of his cloned sons played by Timothy and Samuel West. Incidentally I can't imagine ever finding a production as satisfying without an actual father and son playing those parts.

It's opening encounter sees son Bernard, confronting the father who raised him about his discovery of a cloned brother and the possibility that he is just one of 'a number'.