The Late Middle Classes at the Donmar 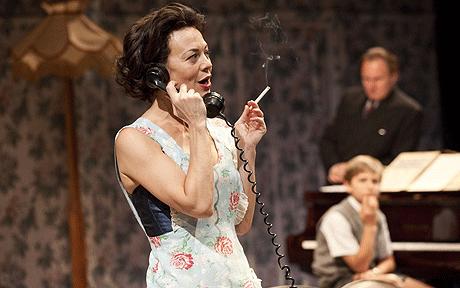 It was back down in the Donmar stalls after my brief star-spotting spell in the circle for the Late Middle Classes which is set in the 1950's on the south coast.

The story revolves around a Middle class family with mother interested only in her first G&T, father absorbed in his work in a path lab and son who has just started taking piano lessons.

Both are superficial and often quite ghastly parents who manipulate their son Holliday (Holly) while the piano teacher Mr Brownlow seems to give him just a little bit too much attention. Too much so as to make you feel just a little bit uncomfortable but not enough to leave you without doubt.

The play is very funny at times - the father and son birds and bees chat scene is particularly good - but it is also moving and deliciously ambiguous. There was much discussion afterwards about what exactly goes on during the piano lessons and the walks on the beach. And then there is the trip to a concert in London which blows up in everyone's faces and changes all their relationships forever.

Continue reading "The Late Middle Classes at the Donmar" »

Ditch at the Old Vic Tunnels 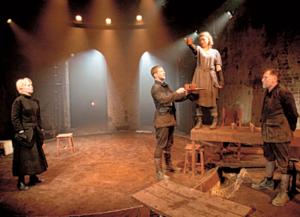 The Leake Street approach to the tunnels beneath Waterloo Station, which the Old Vic has leased as performance space and is showing new play Ditch is strangely appropriate. You see Ditch is set in a grim, war-ravaged not too distant future and Leake Street runs under the railway lines, daubed from floor to ceiling in graffiti and populated with small groups of men just hanging around in a slightly intimidating manner and those looking for a quick place to urinate.

You could set up a camera and some lights and start shooting a sequel to The Road.

And it gets better. The entrance to the tunnels is a graffiti daubed door with one fly poster indicating the play and once inside it is cold, crumbling and damp. There are a series of installations to view prior to the play (pics in an earlier post here) one has a dead hare hanging above a pool of fake blood and another a series of 'bloody' sheets hung up to look like hides.

The play itself is performed on a circular dirt pit, its circumference is a shallow ditch of water. The programme doubles as a copy of the play and new playwright Beth Steel instructs the actors to interact with the mud, to get it on them during the play. And they do, although I think trying to mop it was maybe a little bit of a stretch of the interaction or maybe that was just the OCD in me kicking in.