What a glittering night, yes I am using the word glittering, Thursday turned out to be but more of that later. The play first.

Crocodile is written by Frank McGuinness, he of 'A Short Stay in Switzerland' fame and is a two hander set in a prison cell where a female lawyer played by the wonderful Sinead Cusack is trying to established why a girl (Pippa Bennett-Warner) has committed an awful crime. 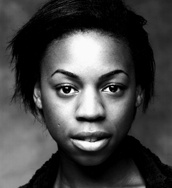 The location of the prison is never established leaving you to make your own assumptions. From what you learn of the girl's past, I took it to be a civil war ravaged African country. But in the end the setting is purposefully irrelevant so as to focus purely on the two characters and their story.

Curiousity grips from the outset as the tale slowly, well I say slowly, it's a 45-minute play, unfolds. At first it is the lawyer doing most of the talking but as the girl gradually opens up unveiling the events that led up to 'the act' in a series of child-like stories.

She is obviously clever at times turning the tables on the lawyer forcing her to examine her own past.

Cusack is superb as you'd expect from such an experienced actress but all the plaudits must go to young actor Bennett-Warner who gives a performance of such raw emotion it is gripping to watch.  She is surely a talent to watch.

RSC London season goes round, but what to see?

Have been perusing the brochure for the RSC's London season which plopped onto my doormat this week. Stratford is coming to Camden this year with the company taking up residence at the Roundhouse*. And I am really quite excited about what they will do in this unique space (and the fact that they aren't using one of the stuffy West End theatres).

I've been to gigs there but have always wanted to see some theatre, and particularly theatre in the round which I'm hopeful the RSC will do.

Now all I need to do is decide on what I want to see. It's a choice between Anthony & Cleopatra and Julius Caeser. I've not seen either play before (I'm slowly working through the ones I didn't study at school/uni). Any suggestions?

* The building is an old Victorian railway engine turning shed.

Welcome to Thebes at the National Theatre (pre-World premier review)

Ooh I'm writing this before press night (tonight) which feels a little naughty. But I'm not the first, the West End Whingers have already tip-toed all over Moira Buffini's new play Welcome to Thebes with their usual wit and sharp observation (link at the end).

So. Welcome to Thebes is set in modern times - an African country ravaged by civil war takes its first tentative steps with a democratically elected Government. But it needs money to help it rebuild itself and it's Government invites the suave and smug leader of a rich nation in order to garner his financial support.

And this is where it goes all Greek mythology. The visiting leader is Theseus, first citizen of Athens. All the characters are similarly from Greek legend - a mixture of Greek legends that is. The new president of Thebes is Eurydice and Oedipus's daughters, Antigone and Ismene, are in there too, as is the aged-spouter of prophecies, Tiresius.

Eurydice is new to politics and determined to remain true to her vision of peace and reconciliation for Thebes. But she has to contend with in-fighting and the politics of international aid. She is also haunted by her own experiences of the civil war which cloud her judgement, leading to events which push Thebes back towards the brink of civil war and Theseus towards his helicopter home.

OK so Hens is the second play I've seen in the Sky Arts Playhouse Live season (3rd in the series as I missed the first). It's by Alia Bano and is about a Hen weekend in Paris. Bridezilla has planned the weekend to the enth degree and not everyone is enjoying it.

It's a play about friendship, loyalty. Growing up and growing apart as responsibilities change. And I don't know what else to say about it really. It was mildly funny in places. Predictable in others: they fall out, make up, there are some revelations that aren't that revelatory.

The acting is fine enough. It's mildly entertaining. And that's about it, it wasn't terrible at all but it wasn't wow.

(That was one of those 's'ok' plays and thus difficult to write about reviews, could you tell?)

News emerged this week that Ben Barnes - he of Chronicles of Narnia film fame - has been cast in the Trevor Nunn-directed, stage adaptation of Sebastian Faulks' novel Birdsong.

I've not read the book but have heard very good things about it. I have seen Ben Barnes on the big screen  but he hasn't done anything that makes me go 'wow'. So I'm curious*. It's not his first time on stage but I imagine it is his biggest role to date.

Adaptations of much-loved novels are a risk in themselves and to play the lead? Trevor Nunn at the helm can only be a plus though. Might have to get myself a ticket. 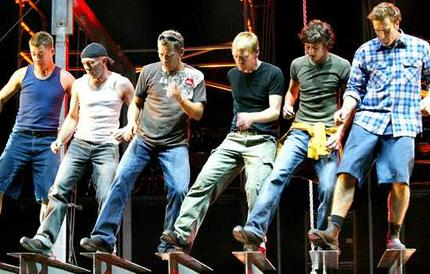 Not actually me shuffling around with metal on the bottom of my shoes, no, the closest I get to tap dancing is having a bit of a bop while I'm cleaning my teeth at the bathroom sink...

Anyhoo...tap dancing or rather Tap Dogs at the Novello Theatre. Not my usual thing but an opportunity arose and so I thought what the heck - the dancers are bound to be quite cute if nothing else. So off I pop with friend Kate, fortified with steak and red wine and ready for some toe tapping.

Tap Dogs is six Australian tap dancers and a set that looks a bit like a building site and, well, they tap dance. They tap dance on metal surfaces, on wooden surfaces, on girders, on pipes, on ladders going up slopes, going down slopes. They tap dance while bouncing basket balls and pulling ropes and with two girls drumming and with 'tap' operated sound effects. They tap in water, they tap upside down, they tap with sparks flying. They tap while throwing water over each other...you get the picture.

The show is about an hour and 20 minutes long straight through and I spent much of it thinking to myself 'OK so what's next? A back flip maybe?' A bit mean I know but I confess that I was waiting for something, well, a little bit more spectacular.

Pub theatre at its best: The Man at the Finborough Theatre 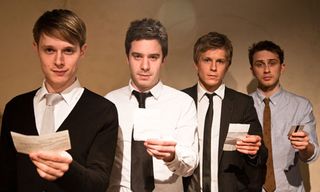 Don't let the fact that tax is mentioned in the play's synopsis put you off. Yes this new play by James Graham is about a tax return but it's the most interesting, entertaining and moving tax return I've ever come across.

It's virtually a monologue. Ben Edwards (the cast rotates and for this performance it was Samuel Barnett, far left in the picture*) is trying to file his tax return after his first year of being self employed but in doing so has to go through a year's worth of receipts.

Each receipt contains a memory, sometimes good, sometimes bad and sometimes very sad about Ben's life. The stories around each receipt are interspersed with a slightly flirtatious telephone conversation Ben is having with the friendly Lisa on the help desk at the Inland Revenue (played by an actor who sits at the back of the audience) but what makes this play really clever is that the audience has all the receipts.

Ben retrieves them one by one, in a random order, so not only is there a little bit of improv as he segues into each story but also the jigsaw pieces of events that make up the past year are played out in a random order. No two theatre performances are ever alike but this adds a whole new dimension to the idea of unique.

Continue reading "Pub theatre at its best: The Man at the Finborough Theatre" »

Casting news at the Donmar

Have got tickets to see Prince of Homburg at the Donmar next month and it is shaping up to have a great cast according to The British Theatre Guide:

McDiarmid and Redmond are like acting royalty for me and Cox I'm curious about as I've only seen him on the big screen. Coy and Hadden-Paton (only someone from the fringes of gentry could have such a silly surname) I recently saw in Posh at the Royal Court.

Just hope the play is decent as I've seen a few things at the Donmar in the last couple of years that have had a great cast but the play itself hasn't been that engaging.

Yep it's surely a West End Whingers-approving 45-minutes long but that's not to get the boys out to Hammersmith's Riverside Studio's but because Mark Ravenhill's Ghost Story is part of the Sky Arts Live Playhouse season. There is a short run of conventional performances by way of a warm up/rehearsal and then it's filmed and broadcast live, so armchair theatre-lovers can enjoy.

It's a great idea and one of a series of five newly-commissioned short plays in the season. (I'm hoping to catch Hens next week).

And presumably because of the TV element it's helped to attract great acting talent of the likes of Juliet Stevenson, Leslie Manville and Lyndsey Marshall. In Ghost Story, Lisa's (Stevenson) cancer has returned and she turns to healer Meryl (Manville) for help. Marshall plays Hannah, Meryl's lover.

It's about the lies we tell each other under the guise of protecting feelings and the lies we tell ourselves as coping mechanisms. Naturally there are some moving moments. I was waiting for the full on Truly Madly Deeply-snot crying that I always associate Stevenson with but the tears were more subdued which was  probably more appropriate.

The script is also funny in places, in a dark sort of way, which appeals to my sense of humour. Fortunately I wasn't the only person who laughed which is always encouraging on more levels than one.

The 45-minute running time certainly gave it a snappy pace. I think the lighting needs refining a little. Poly, my theatre-buddy for the evening, and I both problems with it, albeit minor. Poly thought it a little too bright but put this down the lighting conditions required for the forthcoming live TV broadcast.

For me, towards the end of the play when all three characters are on stage but representing different time lines, the spots flick on and off characters as they 'come into' the scene. Maybe it's because for purposes of brevity the story needs to rattle on quickly but it occasionally it felt like some one was flicking a light switch on and off on too rapidly. Maybe these things will be refined the closer it gets to broadcast.

Overall it's a great piece of short theatre and manages to pack a lot into it's 45 minutes including superb performances from the cast.

There don't appear to be any other reviews for me to link to (if you find any do let me know) so you'll have to take my word for it.

Ben Whishaw fan's might want to take a look at this

As Mr Whishaw's career spans film and theatre I was in a bit of dilemma where to post my latest discovery. As the hook was a clip about Bright Star it's gone onto my film blog so if you are a fan then hop over and take a look.